CLEMSON – Military Appreciation Day is special to the Clemson fan base for many reasons. To one Clemson linebacker, an appreciation for the armed services just means more.

Chad Smith, a redshirt sophomore out of Sterling (VA) Dominion, played significant snaps last Saturday against Florida St. in a division-clinching game for the Tigers. Smith was pleased with his play, but he knows that Saturday’s festivities will mean a little more to him because of his family’s military background.

Smith’s grandfather flew bombers as a pilot over occupied Germany during World War II, was shot down by the Germans and spent time as a German prisoner of war.

“It means a lot to me, actually. My family is big in the military. My grandpa was a World War II veteran and a POW,” Smith said. “My dad served in the Air Force for about 25 years and retired a Colonel. My older brother served in the Air Force. On my mom's side, her dad was in the Navy. My uncle served in Vietnam. It means a lot to me. It's a special day and it's great to have a military appreciation and it's a salute to those who serve overseas and sacrifice a lot for our safety and our country.”

Smith said he grew up listening to his grandfather’s stories. 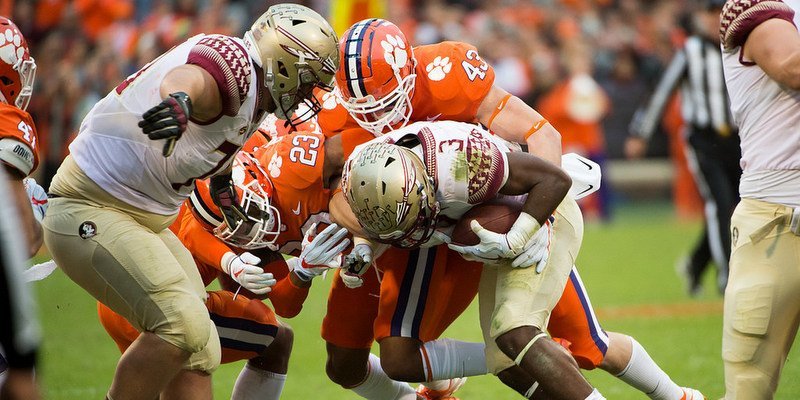 “He was shot down over one of the German-controlled countries. He was the last person to jump out of his airplane and when he parachuted out, he landed and broke his ankle,” Smith said. “Germans were there and he was captured. He served about three months before he was liberated by the Russians. It's a big moment. Military appreciation means a lot to me and my family. He's definitely a true hero in my book.

“He's talked a little bit about those experiences. He's awesome and it's neat to hear some of those stories that he tells his grandkids. Even my dad, sometimes is like, 'Wow, you never told me that when I was a kid.' It's really surreal. You kind of don't have words to come up with about how awesome a moment like that is. To see that's my grandpa right there who served in on of the biggest wars in the world. It's pretty awesome.”

Head coach Dabo Swinney says that the Smith family is a family of details.

“He's focused all of the time. It could be the littlest thing. Here's Chad and this is the product of how he's been raised,” Swinney said Tuesday. “His dad, John, is some type of CIA agent or something. He's at the Pentagon and he's done all of this stuff. He kind of scares me when I get around him. Chad is just like him.”

Swinney told the story of how Smith approached him for permission to attend his sister’s wedding in Atlanta last Friday.

“Chad's sister was getting married this past Friday in Atlanta. Chad came to me forever ago. 'Coach, I know it's Friday of the Florida State game and my sister will be getting married at like 0900.' I just want to put my arm around him and say, 'It's alright buddy. It's all good.' He's just so respectful,” Swinney said. “He has such a great respect for the chain of command and authority and it's just ingrained in him. It's a pleasure to be around him and coach him.

“He went through this whole deal to get permission to go see his sister get married Friday night in Atlanta. 'I will leave Thursday night right after practice. I will be back.' He had his whole itinerary. I was like, 'You go enjoy your sister's wedding and we'll be here waiting on you Friday night. But, how are you going to get your car from the hotel?' Sure enough, his dad followed up with an email - I know Chad was supposed to talk to you and he had the itinerary. They are a family of details. I love Chad. He has a great respect for the process that he's going through and what it takes. Just a very focused young person. Just a great family. Great mom and dad. I'm really proud of Chad.”

Smith was asked about the current national anthem controversy that surrounds the NFL, and he gave the perfect answer.

“I haven't really given much thought about that. Everyone has their own personal opinion,” Smith said. “Whether you're from a military background or not, there's a lot of controversy hovering over that. I personally will always stand for the National Anthem, but other people have reasons for kneeling and what not and that's all good. To be honest, it's probably all up to personal opinion.”

After talking to Smith's family, his grandpa flew B-24 Liberators. His plane was hit over Yugoslavia by anti-aircraft artillery returning from a bombing run on his 26th mission. His grandpa is 94, living with his bride of 72 years in Ashburn, Va.