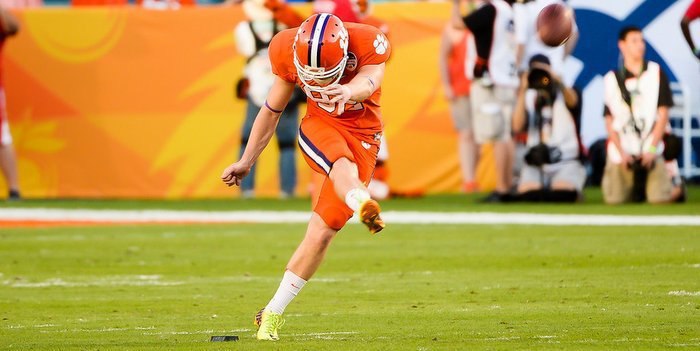 Huegel has worked on his kickoffs

CLEMSON – Greg Huegel walked on to Clemson’s football team last August and not only wound up earning a starting spot, he picked up a few All-American honors along the way. But don’t expect Huegel to revel in his success. He used the offseason to shore up the weak parts of his game, and he thinks yoga has helped make the biggest difference.

However, he also missed five extra points and had just 10 touchbacks on 37 attempts, averaging 62.95 yards per kickoff. As a result, Huegel spent the offseason working on his long game – and his short game.

“I've been working on long field goals and extra points the most. It's kind of weird because they contradict each other, but those are the biggest things I've worked on this summer just so I can go out there and get it done for the team. The longest field goal I've hit is 63 yards last week in practice,” Huegel said after Monday’s practice. “I've gone to one of my kicking coaches Dan Orner. I went to him a couple of times just to get kickoffs down pat.”

Huegel enters 2016 as the expected starter, and instead of worrying about whether he’ll make the team he’s trying to manage expectations.

“I would say the main difference from last year is that yesterday was exactly one year since I joined the team, I wasn't here last summer, but there will always be some nerves there but you have to try and push those out of the way,” he said. “We've been on the biggest stage, so now I just have to deal with expectations.”

Enter Chandler Catanzaro – another former walk-on who now kicks for the Arizona Cardinals – who advised Huegel to try yoga.

“I've talked to Bradley Pinion a little bit, but the person I've been talking to the most is Chandler Catanzaro. He's been at a couple of the camps I went to,” Huegel said. “He's texted me a couple of times just to see how I'm doing and stuff like that. That makes me feel pretty good because he takes time out of his day to send me a text. When he kicked here, he just did field goals because Bradley was the kickoff guy. Catanzaro was saying that the biggest thing that made the largest difference for him was yoga. It sounds weird. I took a yoga class over the summer as one of my courses. He was saying that it made a big difference for him in terms of kickoffs. I can already tell that it's made a difference.

“Yoga has helped with the mental side of things. I had never taken yoga until this summer and to be honest I put my body in positions that I have never been put in before. It was pretty uncomfortable and it's harder than people think, but whenever you're in those positions you have to hold them and you're out of breath. The instructor says to really focus on your breathing and if you focus on your breathing you learn to calm yourself whenever you're not in comfortable situations, so it kind of relates to football as well. It's just being able to control your breathing and accept the situation that you're in.”

The discipline has already helped.

“I've already seen a difference because my flexibility has gone up tremendously and that's a big part of kicking. I have a longer range because last summer my main focus was that they need a kicker with the whole situation that was going on,” Huegel said. “My main focus was to be the most consistent kicker that I can be. I saw one of Coach Swinney's interviews last year and he said, 'We're looking for a guy that's consistent inside of 40,' so I was like okay if I can be consistent inside of 40 then I should be fine. This year one of my main focuses was working on long field goals and I've definitely seen an addition in yardage.”

Huegel was recognized in the preseason as a Lou Groza Award candidate, given annually to the college game’s best placekicker.

“It's weird. I'm going to be honest with you, whenever I first saw that I was predicted to be on the watch list for Lou Groza Award, I still can't even imagine,” he said with a smile. “There are so many good kickers out there and to be considered in other people's eyes to be one of the best in the nation, that's really nice.”