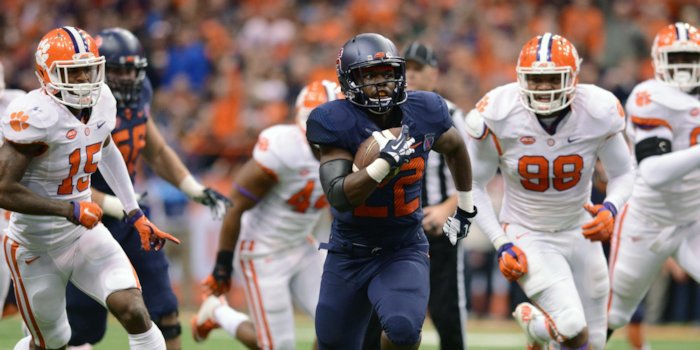 SYRACUSE, NY – For the last three weeks, Clemson’s defense has been a little lackadaisical in its performance, and the lack of intensity and focus is becoming a concern for Brent Venables.

Venables doesn’t do casual, and he doesn’t want his defense being casual, either.

Against, N.C. State, Florida State and Syracuse, Clemson gave up 389, 361 and 322 total yards, but it was the 242 yards on the ground in Saturday’s 37-27 victory over Syracuse in the Carrier Dome that is very disconcerting to Clemson’s defensive coordinator.

Venables told the media after the game that the defense worked on option defense all week in practice because they knew that with a new quarterback Syracuse would want to establish the run early, so nothing the Orange did should have surprised anyone on Clemson’s sideline.

“No. They ran the zone, read option, split zone and split flow. We've seen them run it,” Venables said during his postgame interview. “They're going to do it when it works. They run it all kinds different ways. We worked hard on it. I know you'd like to blame on, 'Oh, we weren't ready.' Obviously, whatever we had wasn't good. We didn't do a good job.”

“We were out-leveraged time and time again. They got their little tight end outside us and pinned us and continued to get outside,” Venables said. “We obviously did a terrible job getting ready. You don't continue to have those problems time and time again and be doing something right. You're not doing anything right if that continues to happen. We did a very poor job of getting our guys to understand whoever was supposed to have the quarterback. Time and time again he got outside of us. We missed some fits, some huge fits early. I just did a bad job, obviously, of getting them ready to play.”

More concerning than the defenses play in Saturday’s game, however, is the way they’ve prepared over the last couple of weeks, their “casual” attitude, and lack of respect for the game itself.

“We've got do a better job - our leadership coming out with better intensity. I don't think we were as focused as we needed to be, as hungry as we needed to be, and I don't think we respected the game the way it needed to be respected,” he said. “We haven't been getting better the last couple of weeks defensively, and that's very concerning and disappointing, but that starts with us as coaches. I feel like our guys are trying to hurry and get to the end instead of hurry and get to the next play, the next meeting, and the next practice. We've got to do a better job. I thought we were too casual going out on that field today. Syracuse did a good job. They did exactly what we thought they were going to do - come out with toughness and try to establish the run game and the next thing you know they've got you on your heels. We've got to play better and coach better.”