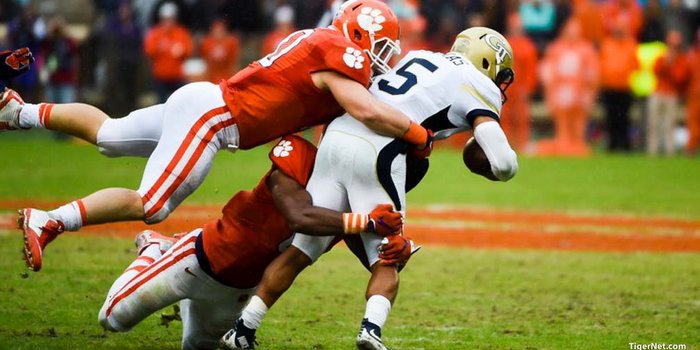 The Jackets will look to rebound after last season’s dismal 3-9 performance.

Coming off of an 11-win season and a top 10 ranking in 2014, the expectations for Georgia Tech football were sky-high last season. Injuries plagued the 2015 season for Paul Johnson’s Yellow Jackets, however, and the Jackets will look to rebound after last season’s dismal 3-9 performance.

With an offseason to recover, Johnson once again has high expectations, but he told the media during the ACC teleconference recently that he’s concerned about the interior of the offensive line – a crucial part to his option offense.

“Well, I think it's been a work in progress. Again, we've had a crazy off-season in that we lost probably three, possibly four offensive guards inside,” Johnson said recently. “We had a young man who came to us at the end of last season and decided to give up football and move away and start -- he's in an art career, and we had another guy who was coming off some surgery that didn't go well that's probably -- I don't know if he's even going to be able to play again. That's kind of iffy. And we had one with a head problem with headaches, and he may be through playing.

“We had to mix and match. We moved Will Bryan, who started at left tackle last year as a freshman, he moved into guard, and I think that's been a good experiment that's gone well. Both our starting tackles a year ago were freshmen, so they're back. Our center Freddie Burden hasn't played this spring, but he's a two-year, will be a three-year starter. He'll be back. So we've got to piece together a couple of guys inside. Like I said, I feel good about Will Bryan in there, Shamire Devine is working, Brad and Scott Morgan are a couple guys we redshirted a year ago that have a chance in there. So there's some guys, and I think we'll be better than we were a year ago. Certainly we need to be.”

Tech is tied with Duke for fewest returning starters in the conference at 11 and tied for 98th nationally, six on offense and five on defense. Johnson said spring practice has been spent developing some of the younger guys who gained valuable experience last season playing because of all the injuries.

Well, I think we've got battles at a lot of positions,” Johnson said. “It would be hard to single out one. You know, we're returning a lot of guys who have played. I've never had a year like last year injury-wise, so forced a lot of young guys to play, so there's a lot of guys playing with experience.”

The defensive backfield will see four new starters this season and will need to develop quickly as Clemson comes to town in week four.

“Certainly the defensive backfield is where we lost a group of seniors,” he said. “We had four seniors back there. So the competition has been pretty good back there, especially at corner. Lance Austin and Step Durham have both played a little bit; Lamont Simmons is a transfer from Southern Cal who sat out last year who I think brings some ability, and then Meiko Dotson and Dorian Walker, two freshmen that we redshirted a year ago, and they're competing.

“So you go to safeties, and AJ played a lot last year, Corey Griffin played a lot last year at safety, Lawrence Austin, so there are some guys who have played at that position, as well, and it gives them a chance to compete. So probably the secondary has been as competitive as anywhere on our team, there and A-back. Our slotbacks, we had eight or nine guys play last year because of injury.”

Johnson was asked if they had begun looking at Clemson film and was quick to point out that as the head coach at Georgia Tech, he has a winning record against the Tigers.

“Right now we're focused on Boston College, and we do breakdowns for the first three games, and we'll do a little bit on it,” he said. “We play Clemson every year. They've had a great run here the last two or three years. We've been fortunate. We beat them here a couple years ago, and I think since I've been here, I think we're 5-4 against Clemson, so it's always been hard-fought, tough games, and I'm sure this year will be no different. They bring back a dynamic team, and they've built a great program there. It will be a challenge. But we've got three tough games before Clemson, so we're not -- we wouldn't certainly overlook any of those people.”