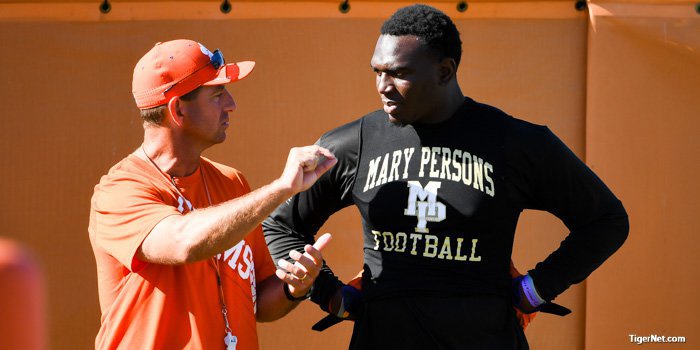 Herring – the No. 54 prospect in the ESPN 300 for 2017 – claims offers from schools all over the country, including Alabama, Florida St. Auburn, California, Georgia, Iowa, Michigan, Oklahoma, UCLA, and Southern California, among others.

While many view Georgia as the front runner for the Forsyth (GA) Mary Parsons defensive end, Clemson is firmly in the mix. Herring has made several trips to Clemson, including for the Tigers’ spring game back in April. His relationship with defensive ends coach Marion Hobby will keep Clemson in the picture until the very end.

Herring worked out under the watchful eye of Hobby and spent time with Swinney, who took Herring to the side for a conversation.

I was standing over next to the defensive ends group watching the proceedings, and one parent came over to me ask me about Herring. He laughed, and said, “I thought my kid could play. He isn’t even in that same galaxy.”

Not many recruits are. Herring has a good motor, doesn’t take drills off, and he looks like he’s having fun playing the game. Other recruits are drawn to him, and he doesn’t mind the attention. When he gets low and then explodes upward, it reminds me a little of the first time I saw Malliciah Goodman. Herring is faster, however. 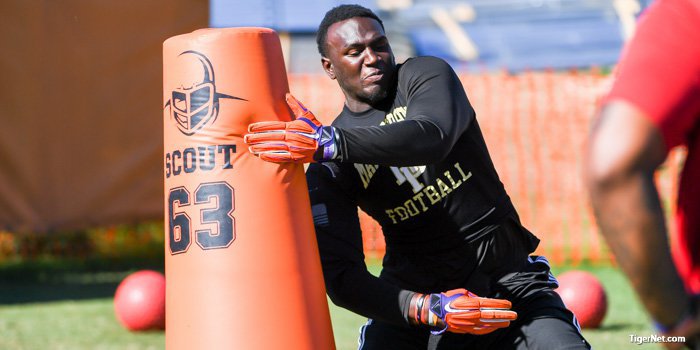 Another defensive end we watched was Lake Worth, FL (Oxbridge Academy) 2017 prospect Jonathan Garvin. At 6-3, 225, he has the body structure to put on good weight, especially when and if he gets in a college weight program. For his size, however, he has good pop and I like how he uses his long arms to his advantage. Florida St., Georgia and Louisville are all in the mix. 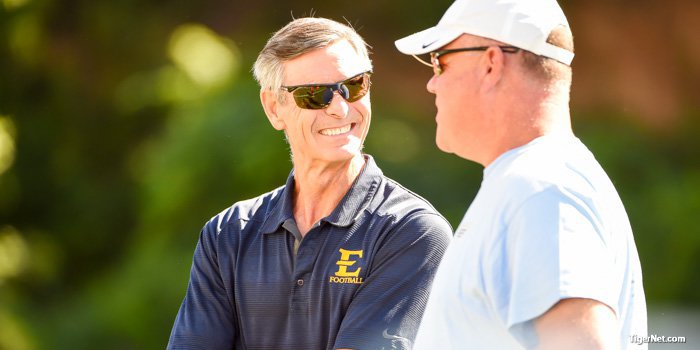 *We’ve detailed how people are coming from all over to participate in the camp, and today was no exception. One family made a 12-hour drive from Florida just so their son could work out with the receivers today.

Another coach stopped me, pointed to the operations facility that’s being built, and gushed, “That’s a game-changer, man. We’ve been to a lot of places, including LSU, and this just blows everybody else out of the water. This place is incredible, from the indoor to the stadium itself to the practice fields. Add in that football only facility and other teams across the region won’t be able to compete from that standpoint.”

*Former Clemson quarterback and coach Mike O’Cain was a visitor today. O’Cain played at Clemson from 1974-76, coached here from 2001-04 and then spent time with Frank Beamer at Virginia Tech. He is currently the offensive coordinator and quarterbacks coach at East Tennessee St. 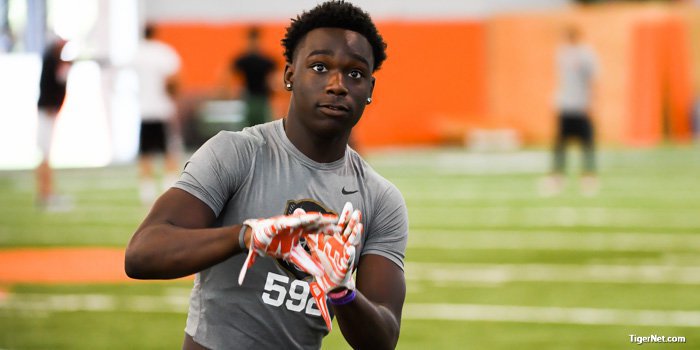 *We will get more into the wide receivers during today’s second session, but wide receivers coach Jeff has plenty of talent to work with today. That includes 2018 wide receiver Derion Kendrick out of Rock Hill (SC) South Pointe. Kendrick was in a group with Jamario Holley, Dyami Brown (2018 WR, Charlotte (N.C.) West Mecklenburg and Demarcus Gregory (2018 WR, Duncan (S.C.) Byrnes).

Who stood out in that group? They all did, because each one brings something different (hands, burst, speed, route running), but Kendrick was the star for me. He has the body type and just looks like a big-time wide receiver, and he is smooth – really smooth – when catching the ball. He’s been well-coached.

Kendrick is one of the stars for the 2018 recruiting cycle in the state of South Carolina, and already claims offers from Clemson, Alabama, Florida, Georgia, Kentucky, UNC, N.C. State, Penn State and South Carolina.

*We watched Tyneil Hopper, a 2018 tight end out of Roswell (GA) as he worked out with Danny Pearman’s group. Hopper has offers from Louisville, Kentucky and Wake Forest. He has the size you like, and he’s one to watch going forward.

*Wanted to throw a quick word in about Ben Batson, the 2018 quarterback out of Daniel (and son of strength coach Joey Batson). Batson can throw the ball around the yard – I called him a gunslinger last year and I think it still fits – and his accuracy has gotten a lot better since the last time I saw him.

I get the impression a lot of people think Batson will just walk on at Clemson, but he’s good enough to go to a smaller school and start. The more I watch him, the more I think coaches from other schools need to get up here and offer and not assume he winds up at Clemson.