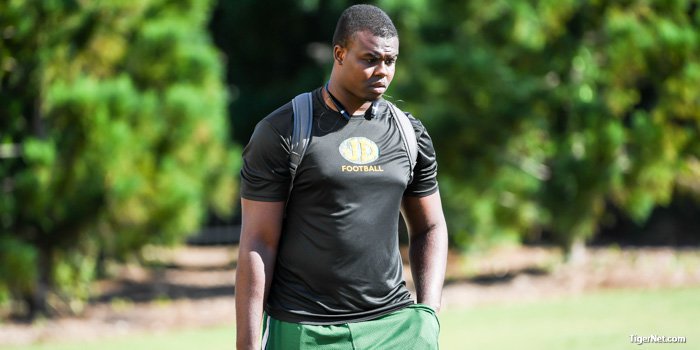 Alec Jackson was on hand Thursday. He currently has 26 offers.

CLEMSON – The first session of Dabo Swinney’s high school camp is officially over.

The campers have gone home, the practice fields are clear, and the coaches can breathe a sigh of relief for a couple of days.

While the last day of camp is usually relatively uneventful – and Thursday was – there were a couple of new prospects who showed up to workout with Clemson’s coaching staff or to take in the environment.

The first was Zyon Gilbert – a 2017 two-star defensive back (according to Rivals) out of Montgomery (AL) Jefferson Davis. Gilbert claims offers from Cincinnati, Illinois, South Alabama, South Carolina and Troy.

While that offer sheet doesn’t sound impressive, I’m inclined to believe that his recruiting may take off as he continues to work the camp circuit. Gilbert worked with the “A” group of defensive backs and immediately caught the attention of anyone watching, especially defensive backs coach Mike Reed. His backpedal is smooth, he can seamlessly change direction and is also quick the ball. It also doesn’t hurt that he’s 6-1, 170 pounds and he plays much longer. 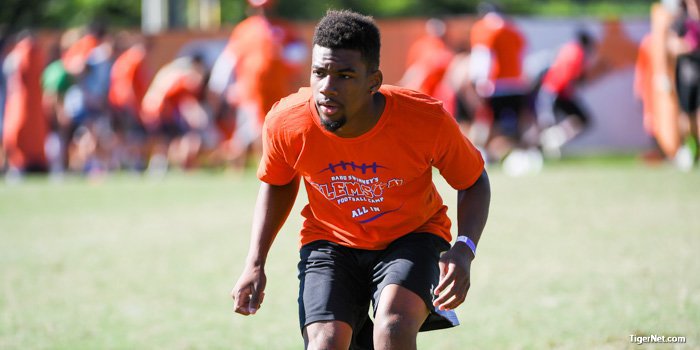 *One last word on Baylon Spector – the 2017 linebacker/safety commit out of Calhoun (GA) as we close the book on session one. Spector is exactly what you would expect when you think about Brent Venables’ linebackers – he’s mean, he’s tough and he likes to work. In two words: Ben Boulware.

Alec Jackson was on hand Thursday. He currently has 26 offers."

To illustrate that point, Spector was participating in a tackling drill where linebacker Jalen Williams was pulling a tackling dummy in an inner tube, and Spector had to tackle the dummy and roll over. Well, not only, did Spector execute the drill to perfection, he took out Williams with the dummy, and you would’ve thought that was the best thing Venables had ever seen.

Venables looked at Williams, as Venables cracked up hysterically, and said, “You just got taken out. Is that the first time you’ve ever gotten taken out at football camp? That’s just so awesome!”

*Speaking of Venables and tackling dummies…Everyone knows how hard Clemson’s defensive coordinator likes to coach and how passionate he is. Well, he’s no different at camp with high schoolers. His linebackers were so rough with the tackling dummies, they broke the first one Thursday morning and had to go to a backup.

*I continue to be impressed with how well the former players do coaching. Da’Quan Bowers just looks like a natural out there going through drills with kids. At one point, the defensive ends were running around a hoop and there was one kid who was going to have to do the drill alone, so Bowers stepped up and did it with him.

Xavier Brewer and Rashard Hall also have a future in coaching, if they so desire. They are just hard enough on the kids to make sure they get the best out of them each and every rep. One of the defensive backs kept dropping interceptions when the ball was thrown his way, so finally Hall looked at him and said, ‘That’s enough, give me 10.” The kid did his 10 pushups and didn’t drop another ball the entire time we were out there.

*One final funny story....A kid showed up to camp this morning wearing a Michigan shirt, and one of the volunteer coaches noticed it and started laughing before he told the kid that he had to turn his shirt inside out if he was going to participate in any drills. Of course, he obliged.