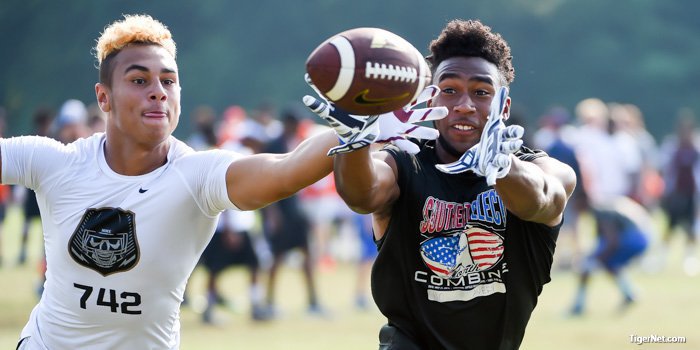 A.J. Avery and Gentry Bonds battle for ball at Clemson's camp on Wednesday.

CLEMSON – As Clemson tries to replenish the talent lost in the defensive backfield and at defensive end, there was plenty of talent to choose from as a flurry of one-day campers worked out Wednesday morning.

There were a lot of new faces working out with defensive backs coach Mike Reed, including a handful of prospects who already own offers from Clemson.

C.J. Avery – the 4-star 2017 safety out of Grenada (MS) – worked out for the first time Wednesday morning, and it was easy to see why the Clemson coaches jumped on board with an offer. AT 6-1, 196 pounds, Avery has the size of a typical Clemson safety and possessed good ball skills and a knack for getting to the ball. He’s good in coverage and wasn’t afraid to be physical to knock the ball loose.

Avery has 15 offers from places like Alabama, Arizona, California, Louisville, Michigan, Ole Miss, Mississippi St., Notre Dame, Stanford and Tennessee. His recruitment has taken off recently, Alabama, Mississippi St., and Ole Miss have recruited him the hardest. However, don’t discount Dabo Swinney, Brent Venables and Mike Reed who all spent one-on-one time with Avery during the Tuesday sessions.

Another newcomer to Clemson’s recruiting board is Murfreesboro (TN) Riverdale cornerback, Gentry Bonds, who picked up an offer from Clemson last month. Bonds is a 4-star 2017 prospect who has the size and athleticism to play either cornerback or safety. He was very quick to the ball, smooth and showed the ability to change direction and quickly flip his hips to get to the wide receiver.

Bonds has offer from Nebraska, Tennessee, Missouri, Memphis, Louisville, Kentucky and Georgia Tech, but the Clemson offer immediately intrigued him.

Ellenwood (GA) Cedar Grove cornerback Tre Shaw was also on hand for Wednesday’s workouts. At 6-0, 180-pounds, he’s a physical corner and liked to play tight coverage in the drills we watched.

Shaw recently released a top-10 consisting of North Carolina, Clemson, Auburn, South Carolina, Michigan, Georgia, Florida, LSU, Tennessee and N.C. State. With Clemson being one of the newcomers to the offer list, it didn’t take him long to make it to campus for a visit.

*The previous three defensive backs can all help Clemson right away, but one prospect to keep an eye on is 2018 Moncks Corner (SC) Berkeley safety Israel Mukuamu. At 6-4. 190, Mukuamu is a rangy safety who can cover a lot of ground. He’s tough an isn’t afraid to make the hit.

*There were also a couple of new faces working out with defensive ends coach Marion Hobby, but if you’ve followed Clemson recruiting over the last year they won’t be new names.

Florence (SC) Wilson’s Xavier Thomas, who many believe will be the top prospect in South Carolina for 2018 and Anderson (SC) TL Hanna’s Stephon Wynn, Jr. were both on hand. When looking at defensive lineman, the first thing I look for is the size of their base, and both Thomas and Wynn have thick, strong lower bodies. They both exhibit good eye discipline and burst.

Tampa (FL) Hillsborough defensive end Zachary Carter was still on campus, although he didn’t work out. Carter spent a lot of time with former Clemson defensive tackle Brentson Buckner during the morning session. 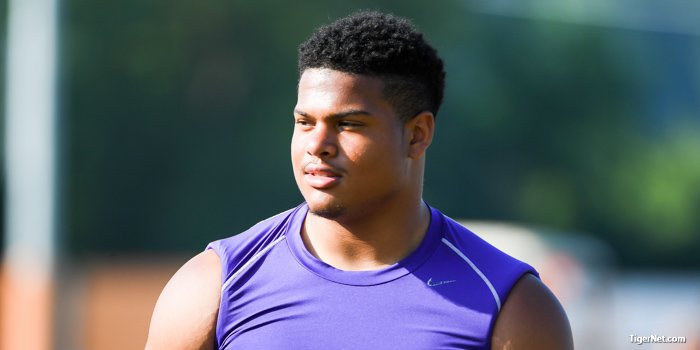 *Before the end of the media period, I went to take a look at Tony Elliott’s running backs and immediately 2018 prospect Lyn-J Dixon jumped out. He’s only on campus for the morning session, but quickly earned praise from Elliott. At 5-10, 185-pounds, the Butler (GA) Taylor County running back has good speed, quick feet and excellent burst off the line.

Dixon has offers from Alabama, Georgia and Tennessee, but I wouldn’t be surprised to see that list grow if he continues making the rounds on the camp circuit.

*I went over and watched the quarterbacks for just a minute and Hunter Johnson was going through a footwork and ball security drill with former Clemson quarterback Cole Stoudt, who is helping coach this week. First off, every time I watch the Brownsburg (IN) signal caller I’m more impressed with his poise and skillset.

But, the part of the story that was funny is that part of the drill is for Stoudt to try and knock the ball loose with a punching glove. Johnson navigated the bags precisely and when he got to Stoudt, the ball was knocked loose, and I’m not sure I’ve ever seen a bigger smile on Stoudt’s face….except maybe after beating Oklahoma in the Russell Athletic Bowl. 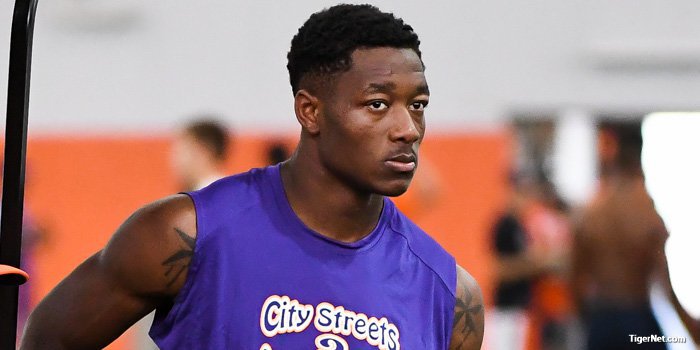 *Higgins worked out for the first time this morning and looked exactly as you would expect a five-star receiver to look – fast, explosive and good hands.

*Santee (SC) Lake Marion 2017 4-star safety Tank Robinson was supposed to be on hand for the morning session, but Robinson and his mother arrived at the start of the fourth period. His offer list is impressive, including Clemson, Alabama and Notre Dame.

*Clemson 2017 commit and 4-star linebacker Logan Rudolph of Rock Hill (SC) Northwestern worked out with Venables’ group, and he looked bigger, faster and stronger since we saw him last at Swinney’s camp. He worked predominantly with the tight ends a year ago. His athleticism is what jumps out.