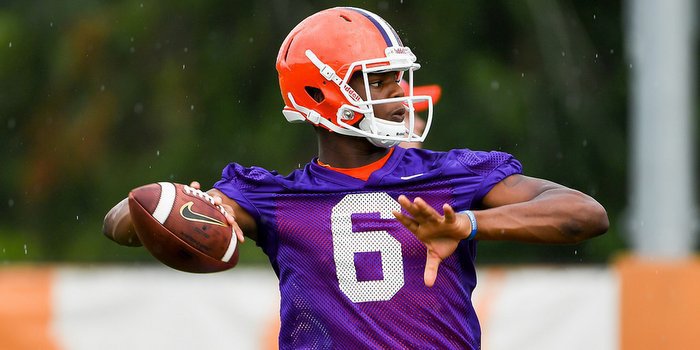 CLEMSON – A final scrimmage and practice and off for the holidays.

Second-ranked Clemson practiced for two hours Wednesday morning, the last practice before Christmas break. The team will reconvene Sunday night in Clemson, practice early Monday in Clemson and then fly to Arizona Monday afternoon to begin Arizona preparations for the Fiesta Bowl against Ohio St.

Head coach Dabo Swinney told TigerNet he likes what he’s seen out of the team during bowl practices.

“Just like it's been all year with the leadership of the guys and how they've really just showed up. They've been really focused and energetic. They were excited about today,” Swinney said “They're ready for a little break and I'm ready for them to get a break. Today was good practice as far as buttoning everything up. The key for us is we can't start over on Monday when we come back. These guys, the greater vision the bigger the sacrifice, so they've got to enjoy some time but also find some time to stay focused on what we're trying to do and continue to go through some notes and review some things and make sure we're ready to roll when we come back. We can't start over, we have to pick up and have another great game week of practice. They're ready and I think they all feel good about it, so now it's take us a little break and come back and get ready to go to Arizona.”

Swinney said the Tigers scrimmaged Tuesday afternoon, giving the redshirts and younger players a chance to show the coaches how much they’ve progressed during the fall. 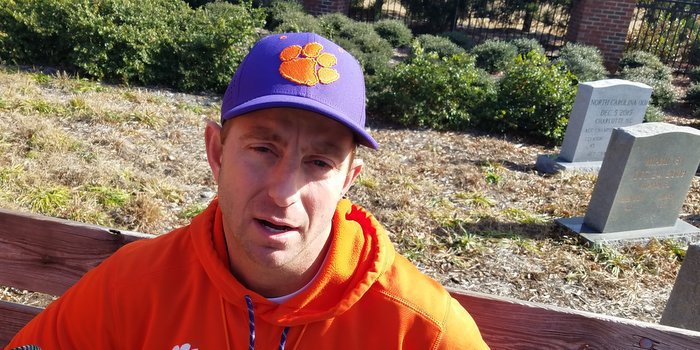 “We actually scrimmaged yesterday and that was a blast. We had a lot of fun watching those guys compete,” Swinney said. “The first guy that jumped out was little Hall Morton - a walk on safety. He made about three plays that brought everybody to their feet out there. It's fun to see teammates get excited for guys. It really is. The varsity had some conditioning and they stayed around to watch and they all got into it. It was a blast. I thought Zerrick Cooper made a great touchdown throw to Diondre Overton and he had a nice play. There were some nice plays on defense. Shaq Smith had a great sideline to sideline play. All of those guys. Nolan Turner, Isaiah Simmons, Amir Trapp - some guys are playing a little bit now but most of the guys aren't playing. Nyles Pinckney continues to shine and stand out.

“Jamie Skalski, it's good to see him get out there and get some scrimmage work. We had Gage Cervenka snapping. I was very impressed watching him snap yesterday. He's working guard and center. Getting those young tight ends like J.C. Chalk a bunch of good work. Shadell Bell, it's good for him as he's transitioning into that tight end position. T.J Chase. Darien Rencher is a young running back. We moved Ty Thomason back there to running back. He had a nice play. Ryan Mac Lain. A lot of the guy's names you might not recognize, but we have fun with that. Trayvon Mullen is out there competing. The Tuesday practice in Arizona, we'll have another scrimmage opportunity.”

The Tigers will have almost an entire week in Arizona, and Swinney said he wants to make sure he enjoys the process this time around.

“Absolutely. That's one thing I promised myself is that I'm going to enjoy it. It's hard to win and all you can do is do your best and put everything you've got into it,” he said. “We've done that, there's no doubt about it and we're going to continue to do that. Not be defined by the scoreboard, that's always been my thing. Be more defined by how we do things and the type of effort and commitment that I see, that's my true measuring stick. I want to make sure everyone else enjoys it too and that's the way we structure things, too. I don't want guys to dread coming over here. I want them to be excited to come to work. We've got a good balance. It doesn't get any better than this. I'm excited we get to go back to Arizona and we've got a little more time. The 48 hours we were out there last time was all a blur.

“I’m excited to be able to go back out there and see the town. We're going to get to go to a Suns game. My kids and the staff's kids are going to get to go to the Grand Canyon. It will be neat to experience something different. It's fun to see these guys get to experience different things together as a team and the relationships. That's what it's all about and why I love the bowl trips and always have. That's what people don't see. It's so much more than just the game. It's the time that these guys get to spend with each other. A lot of these guys, this will be their last significant time with each other because they've got to move on and they're going different ways. They'll be busy and they have lives and we all know how that goes. It's a special thing to be a part of and I definitely enjoy it.”

On players skipping bowl games to prepare for the draft

“To each his own. It's hard for me to judge others. I don't really know all of the dynamics that have gone into those decisions. Sometimes you don't know what a player has gone through to get well every week to play. I can't really judge those guys. All things being even if a guy is healthy I think it would be very disappointing for guys to do that. I think you play the season and a big reason why these guys have opportunities to go on and be successful is their teammates. They're all a part of it. I'd rather know now than have a guy show up and not play on the flip side of it. If a guy's not into it or all in, I'd rather know today. You only need 11 and at the end of the day, I want the guys that are fully committed to the team and the university and all of that stuff. If a guy ain't committed to that, then I think it's best for him to move on than for him to go through the motions and act like he is.”

What has allowed Sean Pollard to step in and play well

“His consistency. The way he prepares. He hasn't flinched. He just stepped in and the moment wasn't too big for him, but I think that speaks to how he prepared all spring and all summer. His mindset - he's very mature. He's a very serious guy. He's very serious about being a good player. It's important to him and it's obvious. It shows because you don't just show up over here and do what he's doing. You're having to to put some extra time and go above and beyond to prepare when you have that little experience. Same thing with (Tremayne) Anchrum, those two guys are great players. Anchrum, I think can play four positions. I think Pollard can play four positions. When it's all said and done, you'll see some cross-training with both of those guys. Really, really blessed to have Anchrum and Pollard. They're what you're looking for.”

Has anything changed schematically for OSU since 2013?

“Not really. They're still very committed to their identity offensively as far as what you do, and same thing defensively. (Greg) Schiano is a new coach but Luke (Fickell) is still there. I think their personnel is a little bit different but the offense still goes through the quarterback just like it did when we were getting ready to play Braxton (Miller). They're very committed to running the football and all of the play action is the same from when we played them. Defensively, they're very sound in what they do. I think they're faster than when we played them. I think this is as good a secondary as we've seen. These guys can go. The linebackers are athletic and can run. They're young but very talented up front. Really, not much different. This is a very good program. It's easy to see. I was looking in Tim's notes and I think Urban (Meyer) has lost five games ever at Ohio State and that's because they recruit a bunch of good players, they've got a good system in place and a good philosophy and the guys buy into it. They've got depth, so when guys leave they've had young guys step up.”

Does he have to remind the team to behave during the break?

“It's one of those things that you constantly remind young people. Young people have short memories. That's an on-going thing with us. We always try to remind our guys that they represent Clemson, we don't switch that off. It doesn't matter if you're a walk-on or the star player, you represent Clemson. There are consequences for your decisions. That never ends. We're very vigilant. You always try to teach them from other programs and other things that you come across just as reminders that you're going to be held accountable and understand the standard that we have here.”

Does he expect Artavis Scott to turn pro?

“There's not really any doubt in my mind but he has the right to change his mind. I'm going to save a scholarship for him. Same with Deshaun (Watson), too. I'm pretty confident that he's ready and if that's what he wants to do, he'll have my blessings. If he wants to come back, he can do that, too.”