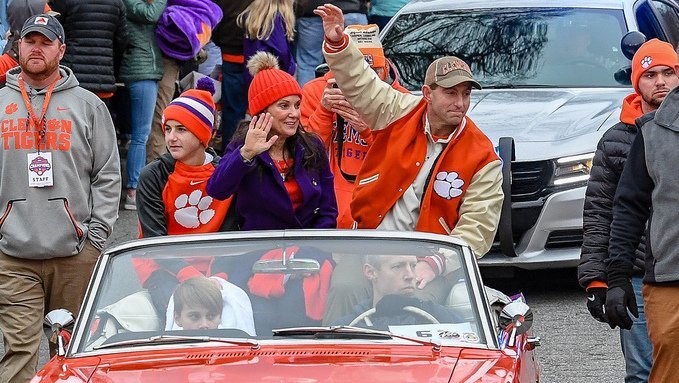 Swinney says his program is built to last

Clemson University hasn’t always been at the top of the college football mountain and prior to 2016, if you would’ve asked people outside of the Southeast about Clemson, they probably would’ve looked at you a little strange.

The previous unknown and the way head coach Dabo Swinney built the program from the ground to the pinnacle of college football is what makes the Clemson program so special.

“But I definitely think we're unique because we're not some blue blood of college football. We're not the famous logo,” Swinney said during the national championship media day. “I mean, everybody sees some of these other schools out there that have this unbelievable tradition, but the cool thing for me is over the last decade, these kids growing up now, since they were eight years old, seven and eight years old, this is the only version of Clemson they know, and really that's all that matters. That's all that matters is today.

“We can sit around and talk about what happened 30 years ago if we want to, or we can be in the moment. That's what I love about it, where we are right now, and it's refreshing. Like I said, for me to have a kid in California that wants to come to Clemson, it's really neat.”

When Swinney took over in 2008, his vision was clear.

“I don't think there's any question that we are unique. We are very unique. Alabama is Alabama; I mean, the tradition that they have with Coach (Bear) Bryant and – I mean, and what he was able to do, I mean, the 60s, the 70s, and there was a little lull in the 80s, but they were still Alabama and the tradition and the brand,” Swinney said. “Whereas Clemson, we kind of had that one little run there in the 80s, and that's kind of when I got the job, everybody talked about the 80s, the 80s, the 80s, and everybody was I think living back in the day.

“And I'm like, man, we've got to – we can build our own program, and that's really what I wanted to do when I got the job. I didn't want to build a program, I wanted to build a program that was unique to Clemson, and I really had an understanding of Clemson and what it was going to take, and I had a deep belief in my vision and myself and what it would look like if we could just stay the course and kind of just take it one day at a time, one recruit at a time, one graduate at a time, and that's what we've done.”

Swinney said he could see some comparison between what the Tigers have done to the way Bobby Bowden built the Florida State program.

“Maybe with what Coach Bowden did at Florida State, they kind of came out of nowhere and built a program that – what Bobby Bowden did was amazing,” he said. “I think there are some similarities there for sure as far as the consistency, and you can ask those questions now because, again, we've had eight, 10-plus win seasons in a row, and we've demonstrated staying power. And that's what I tell everybody, we're built to last.

“We have a coach leave, and oh, they're going to stink. Well, we get better. We have a great player leave. Oh, well, now Tajh (Boyd) is gone, now Deshaun (Watson) is gone, now Sammy (Watkins) is gone. Well, we're built to last. Our program is not about a coach, it's not about a player. It's about our program and the culture that we've established there. It's pretty neat to be a part of it.”