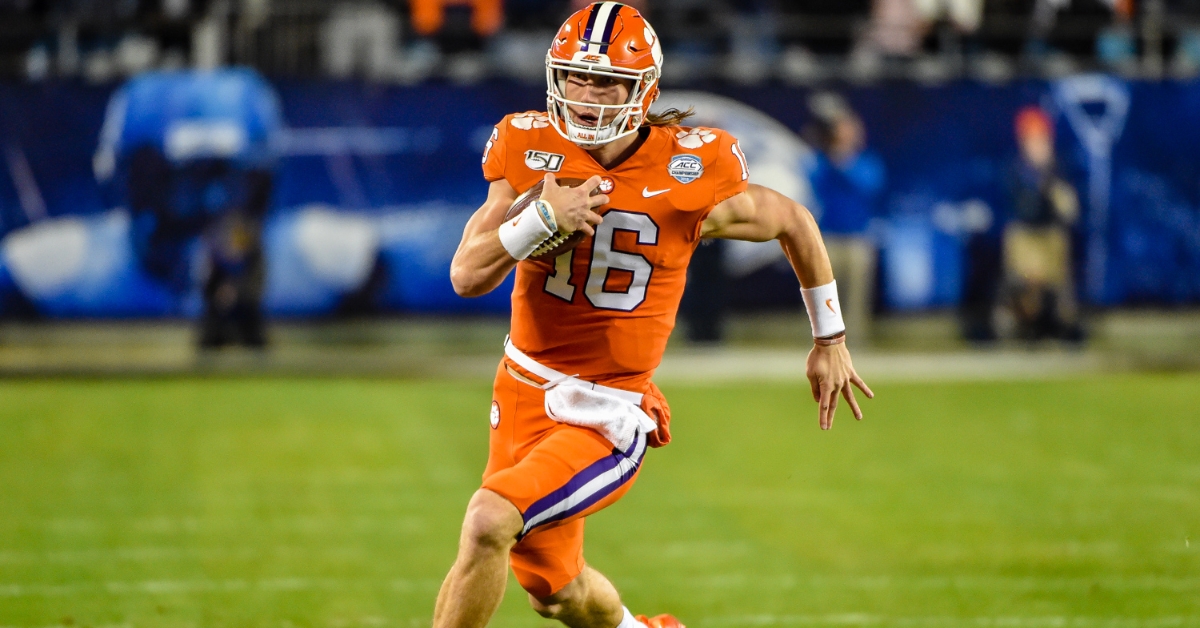 Lawrence takes off for yardage against the Cavaliers

He is 13-0 as a starter, completing 68.8 percent of his passes for 3,172 yards, 34 touchdowns and eight interceptions. Lawrence is averaging 9.4 yards per passing attempt and boasts a passer efficiency rating out of this world at 176.5.

He also has 407 rushing yards on 77 attempts for seven rushing touchdowns. Lawrence is averaging a strong 5.3 yards per rushing attempt, and he said that while his approach hasn’t changed, his knowledge of the offense has.

“I don't know how much my approach has changed. I just know a lot more,” he said after the ACC Championship win over Virginia last weekend. “I have more experience. I have played a lot of games now and I've learned a lot through those games and even earlier this season. I feel like I know more of our offense, and every week I am learning more things. I feel like now I have a better command of the offense and I have a different leadership role.”

Lawrence said the Tigers are playing better now than they have all season and he’s excited for the opportunity to play for a second title in three years.

“I think we are playing our best football right now,” he said. “We are getting better every week and we will have three weeks to ready. We are excited to go back to the playoffs. I think it's just having the opportunity to play for a National Championship. That is something I've dreamed about since I was a kid. Obviously. we got that chance (last season) and it was an unbelievable experience. I think our culture and all the players and coaches on our team, we work so hard all year long to get to this point and we aren't going to let it slip by.”

Clemson defeated Virginia 62-17 in the ACC title game and the Tiger offense was on point.

“We have the same mindset every week. It's not about who we play but it's about how we play,” he said. “We really keep things internal and focus on us and what we need to do. I think that showed last year and it's showed this year in how consistent we've played. It doesn't really matter who we play.”

Lawrence said the Tigers have made sure to enjoy every success.

“Our team does a really good job of enjoying the little things. And this isn’t a little thing,” Lawrence said Saturday night after the win. “Winning five ACC championships in a row is a big deal. And Coach Swinney has told us, ‘Stop and smell the roses. Enjoy every moment.’ Because [if] you keep looking ahead to what’s next, you miss out on stuff like this. So we really wanted to enjoy it.

“And we understood that if we don’t win this game, we don’t have a chance at the playoffs. So, there’s a lot of excitement that comes with that, too.”