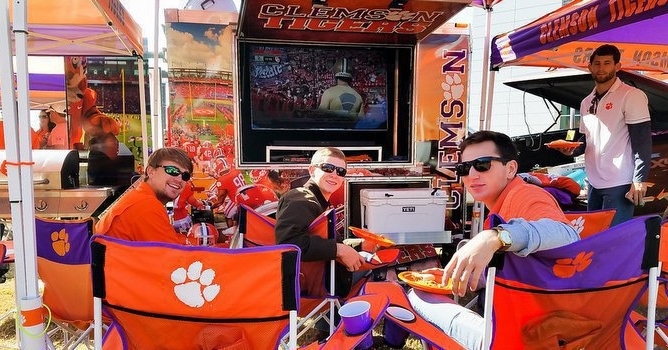 Could Clemson fans have the chance to tailgate at Virginia Tech this season?

Wednesday was one of those typical summer days in Clemson, the kind we’ve all seen and love, and as the thermometer trended towards triple digits, I took my young son Eli (22 months) out for a walk to help burn off some of his excess energy. We walked down the hill towards Death Valley, past Press Road (the area behind the press box) and down towards Howard’s Rock and The Hill.

I stopped for a second because Clemson’s campus has, for the most part, been a ghost town for the majority of the past three months. There are days we walk the campus and only see the occasional maintenance person. Tuesday and Wednesday were different because it’s apparent the campus is once again beginning to draw people.

We reached the bottom of the hill in front of the gate, and an entire family from New York piled out of a van and started taking pictures and it was obvious from their conversations that this was just a side trip – on the way to somewhere else – for the patriarch of the family.

It wasn’t long before others showed up – sometimes in groups of two or three, sometimes alone, sometimes entire families – and as I watched Eli run around under the shade of the trees, a man looked over at me and said, “Man, I sure hope we have football this season. I need sports, but I really want some Clemson football.” I nodded, and then he asked if I worked for the school. I told him no, that my wife works for Clemson, but that she was working hard to make sure students can come back to campus.

Two more cars showed up, and two families rushed excitedly to the gates. There were three little boys – all dressed in Clemson gear – and the dads were wearing Clemson hats. They spent a half hour or more wandering outside the stadium and taking pictures, and I sat there smiling because it’s obvious we all want this to happen.

The good news is that everything I am hearing is pointing toward us having a season. Perhaps with a delayed start, almost definitely with limited numbers of fans in the stands, but the Atlantic Coast Conference is working to put a plan in place so they can make a decision over the next few weeks.

Our buddy David Teel at the Richmond Times-Dispatch has covered the ACC for what seems like eons, and he’s as dialed in as anyone when it comes to the conference. He wrote a piece Wednesday that suggested the ACC is looking at scheduling pods for the upcoming season.

Teel wrote this in his story:

The aim then would be, in concert with the Southeastern Conference, to add a ninth, and hopefully 10th, contest for each school, preserving the four annual ACC-SEC in-state rivalries: Clemson-South Carolina, Florida State-Florida, Georgia Tech-Georgia and Louisville-Kentucky.

Teel then laid out these three options for the pod idea:

As someone who covers Clemson, I like the idea of Clemson playing Virginia Tech if only for the chance to make a trip to Blacksburg in the fall. Virginia was already on the schedule, as were NC State and Wake Forest, so Option No. 1 is intriguing.

The other options have their pros and cons, but nothing is ideal as everyone deals with COVID-19 and the implications for a season. Pods are not ideal – heck we all want the regular schedule and 12 games and what we’re used to – but ideal flew out the window a long time ago.

But we still want to play. Just hang around Death Valley and you’ll see.