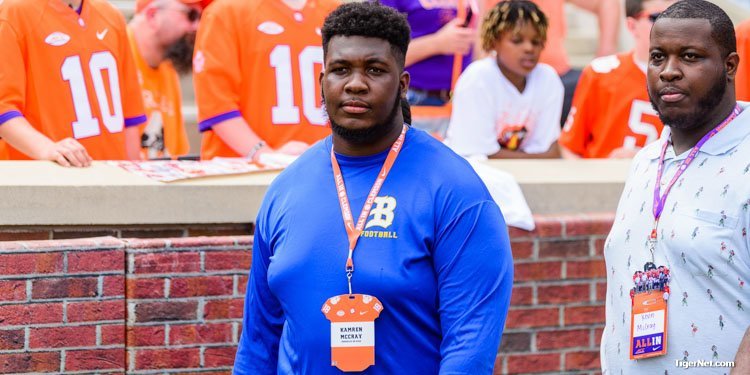 One of the biggest players in the state of South Carolina visited Clemson for last week’s spring game, and he came away hoping for a Clemson offer.

Kamren McCray is a 6-6, 325-pound 2019 offensive tackle prospect out of Moncks Corner (SC) Berkeley that currently boasts one offer – from in-state South Carolina. Arkansas and Clemson have shown interest, and McCray made the trip to the upstate to see the Tigers in action.

While on campus he spoke with offensive line coach Robbie Caldwell and area recruiter Tony Elliott.

“It went pretty good. I just wanted to see how they were as a team this year and get to talk to the coaches. I really haven't talked to them in a while,” McCray said. “Coach Caldwell told me to keep working hard and everything. They are going to stop by and see me during the spring and they want me to come back to camp in the summer.”

“I would love an offer from Clemson,” he said. “That would be really big. I feel like if I keep working hard then the offer will come in due time.”

Clemson’s crowd and the new football operations center stood out to McCray.

“I really liked the crowd. The Clemson fans get really involved,” he said. “With it being a college town, everybody loves the football team and they are really into it. The fact that the new building has everything you could ask for. There are so many things that you can do, you would never be bored.”

McCray said he thinks the Tigers have a chance to be special and two players stood out to him.

“They are going to be pretty good. I think the younger guys are going to be a key factor in how the season goes,” McCray said. “I have been following John Simpson for a while because he went to school right down the road from me. I have followed him since he was in high school.

“Trevor Lawrence, I really wanted to see what he could do and he went out there and proved himself.”