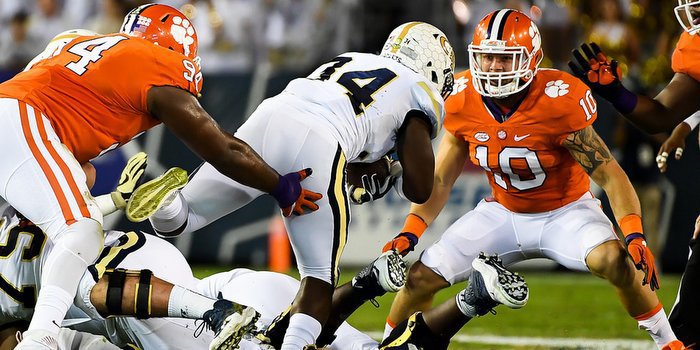 CLEMSON – Ben Boulware knows a special kind of talent will be on the field Saturday night when Cardinal quarterback Lamar Jackson and Louisville take the field against No. 5 Clemson.

While Boulware and the Clemson defense respect what the Heisman contender brings to the table, they don’t fear Jackson or Louisville.

“He's just an athlete, just a freak athlete and he can fly. They do a bunch of funky formations, to mess with your eyes,” Boulware told the media Monday afternoon. “He likes to run the QB run game, and they incorporate him in the run game a lot, so you have to have an extra hat on the ball now to defend him because usually the quarterback just hands the ball off and he just sits there. But if the QB is running the ball, the running back is another blocker, and we have to have an extra hat. I feel like the defenses have probably had a difficult time adapting to that. I know Coach V will cook something up for us.

“We respect his game, and we respect what he brings to the table. We know he is a great athlete, so we respect that, but we don't fear anybody. We know how much of a playmaker and how he is an elite talent, but we are up for the task. As a competitor and a football player, on our defense everyone is just eager to play. 8:00 pm, Gameday, Death Valley - there's nothing like that.”

Boulware has already watched film of all four of Louisville’s 2016 games as well as the last two games the Cards and Tigers have played, and one thing stands out – teams that get pressure up front have been able to disrupt Jackson and that high-octane offense.

“Kind of the same thing with what Marshall did. We have to create pressure,” Boulware said. “We want to keep him in the pocket because when he's out scrambling, he makes a lot of plays. It's very important for our d-line to get pressure and win their match-ups. Their (Marshall) D-line played pretty well. I saw where they had a couple of sacks in that game, and they just closed the pocket on them with blitzes and one-on-one match-ups with their defensive ends and their D-tackles with their offensive line. I think a lot of it was their d-line played really well that game.”

It all starts with the scheme that Brent Venables will draw up this week, but Boulware said it comes down just doing your job.

“Coach V is a football guru. He knows the ins and outs of that type of offense,” Boulware said. “ So, it starts with him, and it ends with us. With us preparing and taking away the mental aspect of it - just read your key and do your job - it's really just assignment football, and we showed that Thursday. It's difficult because you have one mindset of a certain offense and it's the complete opposite. We're up for the task. “

Clemson also has a secret weapon on its side and at practice – Jimmy Greenbeans playing quarterback.

“Coach V is not near as athletic as Lamar Jackson. I wouldn't be surprised if he still didn't do it though because he just likes being in control and likes to be able to control the tempo of the practice,” he said. “They'll throw in Zerrick (Cooper) a good bit in there because Zerrick is identical to Deshaun and Lamar Jackson, but I would not be surprised if Coach V ran a good bit of the plays. He wants to make sure we get over 100 plays in every practice. It's difficult to do that with a young guy like Zerrick, who hasn't really run the offense yet, so he doesn't know how fast and how quick Coach V wants to run each play. It'll probably be 50/50 - Coach V just freaks out about stuff, but we'll see today.”

On the loss of Jalen Williams

“That's a huge loss because he's the only linebacker that can play all three positions. I've played MIKE and WILL. WILL and SAM are pretty similar, but I'm obviously not near as athletic as Dorian (O'Daniel), so he's going to put me at SAM. Jalen (Williams) is the only one that actually knows and has played all three positions. He's very interchangeable, and you can throw him in anywhere they want, so that's a huge loss. I know he's going to kill that rehab and be back in a couple of weeks. We're definitely going to miss him.”

On the battle between Jackson and Deshaun Watson

“Everyone loves talking about Lamar (Jackson) and Deshaun’s kinda been in the background, but I'm like, 'Hey. We've got a pretty good quarterback here, too.' They are both dual-threat guys even though Deshaun hates that word - that's what he is, so he's gotta get over it. They are very similar and pretty much identical. So, getting to up against Deshaun all throughout fall camp the past three years is pretty good preparation for Lamar Jackson.”