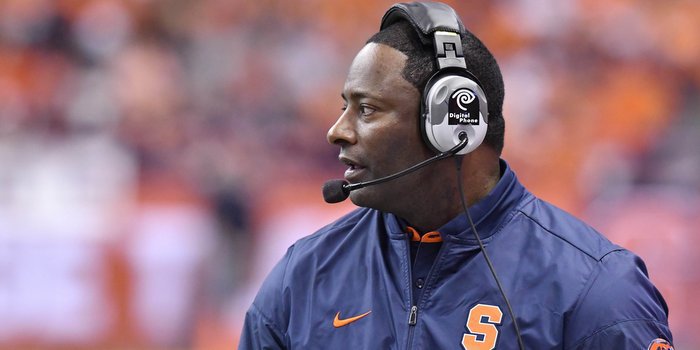 Babers knows the Orange will have a difficult time against Clemson (Photo by Matt Konezny, USAT)

If Dino Babers were a betting man he wouldn’t put any money on Syracuse upsetting second-ranked Clemson, but as the Orange head coach all he’s asking for is a chance.

Or a slingshot and rock to shatter Clemson’s undefeated season.

The first year Syracuse head coach met with the media earlier this week and said that traveling to Clemson will be the Orange’s toughest task to date because the Tigers don’t exhibit any weaknesses.

“We're about to play a fine Clemson team, and I just don't see any weaknesses offensively; what can you say about them: Probably the Heisman Trophy candidate, fantastic receivers; experienced offensive line, very talented,” Babers said earlier this week. “Running backs that are really, really big. And then you flip it on defense, and you've got draft choices all over the place in the front and outstanding linebackers with DBs that can cover. Dabo (Swinney) does a great job with them offensively. His two young coordinators, their scheme is outstanding. And, of course (Brent) Venables, what can you say about him? He's been around a long time, and he's always been -- top defenses. We have a huge task. We are going to play in a hostile environment on Military Appreciation Day, and hopefully, we can survive this thing and continue and try to have the type of season that I think these seniors deserve.”

Babers went on to say that many of Clemson’s backups are better than who Syracuse has playing on special teams.

Babers knows the Orange will have a difficult time against Clemson (Photo by Matt Konezny, USAT)"

“You know, again, this team has no weaknesses,” he said. “Their D-line; draft choices. Their linebackers; draft choices. Their DBs can cover, and they are over six-foot in length, and they are fast; draft choices. Offensively they have a Heisman Trophy candidate at quarterback, outstanding wide receivers, and a very veteran offensive line. And oh, yeah, the running back, he's really, really good, too. I could talk about the special teams but their No. 2s are better than our walk-ons and our threes who play on our special teams. This is a complete football team. It's going to be a giant task for us to go down there.”

In addition to the talent disparity, Babers and Syracuse face the challenge of playing in Death Valley, but he said his team has some experience because they faced Notre Dame in Met Life Stadium earlier this season.

“Well, I think it's something that's already been addressed. I think you're right on. I think that I disagree with one thing,” he said. “I think we've played in that environment this year when we went and played Notre Dame at Met Life, and I didn't think we handled it very well, the noise, the distractions. I thought we were in the game at half-time and we were -- you know, I thought that we didn't handle it well and hopefully we'll handle it a lot better in Death Valley.”

However, all Babers is asking for is a chance, a couple of fortuitous bounces and the Orange may just be in a position to knock of the Tigers.

“I don't know about the naysayers in this game. This is an excellent, excellent football team. There's no weaknesses,” he said. “We would have to play our best game, and they would probably have to play not their best game. But the really cool thing about football is the ball is not round, and it doesn't bounce correctly all the time, and if we can get a couple bounces our way, then maybe, maybe we get a chance. Maybe. But, I wouldn't bet the house on it, brother. This is an excellent football team, and it's at their place, and they're highly motivated. But give us a slingshot and a rock, that's all I ask.”