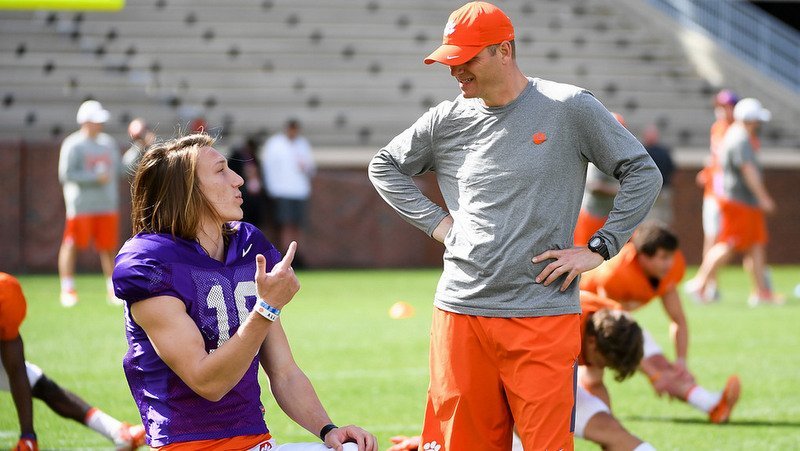 The Clemson coaching staff enters the 2018 season with three scholarship quarterbacks on the roster, with Trevor Lawrence and Chase Brice each expected to battle incumbent Kelly Bryant for the starting role.

Each quarterback brings something different to the table – Bryant is a true athlete that brings leadership and experience to the job; Lawrence has the expectations and the arm talent; Brice is a gritty player who does whatever it takes to win.

TigerNet spoke with quarterbacks coach Brandon Streeter about those three earlier this year, and here is how he broke down each player.:

“I think it was pretty early on in the year because we really didn't know what to expect (when they knew Kelly could start). You knew you had it in him, but he was never in a big-time game situation yet and he had all of those expectations that Deshaun Watson placed at our position, I just didn't know how he was going to accept all of the pressure because that's half the battle. They're all talented. It's a matter of how you handle the media, the pressure, the expectations. I would probably say the Auburn game. The first game was Kent State and he did a good job and a great job of managing but we were definitely a much better team than they were, whereas Auburn it was pretty equal and now we're going to find out. It was the first big stage for Kelly and he had a heck of a game.

“He made good decisions. He made some big throws in key situations and he made some big runs in key situations, so when he was able to do all of those things as part of his game and did it with confidence and battled through adversity throughout the game. That's another thing you look for, how is he going to respond when it doesn't go great? We didn't score a ton of points so it wasn't perfect the whole game but he made the plays to go win it. When we had the four-minute and needing to run the clock out at the end, he made some big plays in that situation. He showed us a lot in that Auburn game because of the high-pressure situations that he had to face.”

“Deshaun was a quiet leader. Everybody respected Deshaun for who he was as a person and how hard he worked and his talent and he definitely brought that to the table. Kelly brings a different type of personality. When he steps in the room, he brightens up the room with his big smile. He's always happy. He's always fun to be around. Everybody on the team loves him and I knew when he stepped foot on campus that he was going to be a heck of a leader. I didn't know how much he was going to play or if he was going to win the job or all of that stuff, but I knew he had the makings of a great leader and he's shown that this whole year. These guys love Kelly Bryant. They rally around him and they play for each other and they play for him. It's neat to see that.”

“I love Chase Brice. He's a great kid. He's got a demeanor that's similar to Kelly Bryant as far as personality. Everybody on the team loves the guy. He can get along with anybody. He's just that type of person. I think his leadership quality is unbelievable. His talent, just watching him in recruiting him and then watching him in preseason camp and throughout the year when we had different opportunities to watch him - especially during scrimmages in bowl prep - he's got what it takes. He's got the arm strength. He can move. He's big. He's smart and he understands the big picture. He's learning the system this fall and that was a big challenge for him. He's got to take every day and get better and not take any day for granted. If he didn't do that then he wouldn't be where he is right now. He's starting to understand the offense a lot better and I feel really good about Chase.”

“He's special. I've been recruiting him since he finished the ninth grade. I remember talking to Coach King when I got the job here three years ago, I went there the first week because I heard about him and knew about him. Brent Venables told me about him because that was his area at the time. Just sitting down with Coach King, I said, 'Alright, I hear about this Trevor Lawrence kid. What is he good at and what does he need to improve?' He just kept saying, 'Coach, he's got everything.' I sit back because I hear that once in a while from coaches and I'm like, 'Well, give me something he needs to improve on.' He said, 'Coach, I'm telling you, he's got everything you could possibly want.' He's right. He's got the ability throwing wise to make any kind of throw - in the pocket, out of the pocket, on the move - and he's very accurate. He's got very good arm strength. He's 6-5 or 6-6, 210 pounds. W

“What I was probably most impressed with after I heard all of this is how he can move. He can really move. He's a really, really good athlete. He's not just a tall 6-5 surfer boy that can't do it. He can move and get out of the pocket. As a quarterbacks coach, that's one of the top things I look for in a quarterback. In our offense, you better be able to move. He might not be a Kelly Bryant as far as designed quarterback runs like we have for Kelly Bryant as much but he's a guy that all of these RPOs, if it's not there, he'll make those throws all day long. He's very, very valuable. The kind of things that you don't see on the field is that he's a great character guy. Awesome family. He's one of the most poised guys I've ever been around. Deshaun was ridiculous. Kelly has been unbelievable so far as far as being poised no matter what the situation. All of these expectations that he's had because he had so much success early on - ninth grade, tenth grade, 11th grade - and he's continued to get better and not dip at all. He's risen up in big games. The game on TV against Bartram Trail might have been his best game. Handling those expectations, he's proven to us that he can do that.”