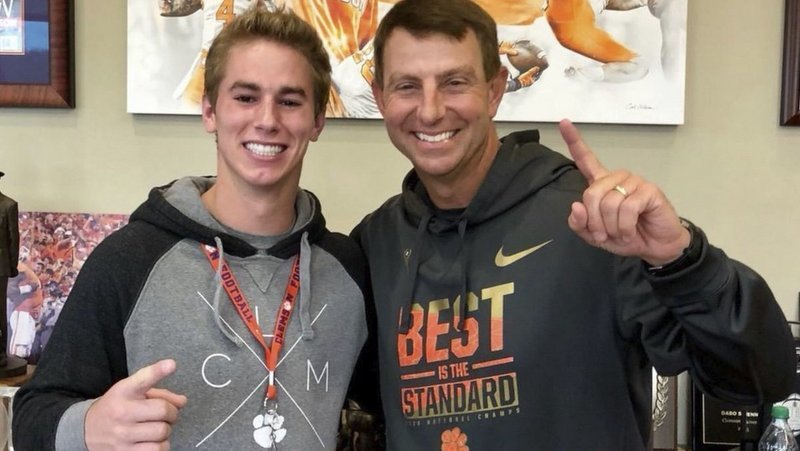 When Hamp Greene sees Hunter Renfrow catching passes and scoring touchdowns, he can’t help but dream about what his future might hold as a Clemson Tiger.

The Birmingham (AL) Mountain Brook wide receiver accepted a preferred walk-on offer from Clemson after a trip to campus earlier this week and said it was the family atmosphere that ultimately sold him on the Tigers.

“Honestly, I've been able to come up to Clemson a few times to two games and to camp and recently this past Monday,” Greene to TigerNet Tuesday evening. “I've always loved Clemson from the moment I put my foot on campus. Once I was able to experience the culture that Dabo has created and all of the love that the players and coaches have for each other, it really felt like a family to me. That was a major factor that helped me make my decision. I knew that I'd be a part of a really awesome and neat family.”

Greene was already familiar with head coach Dabo Swinney and Clemson because his father was the placekicker at Alabama from 1989-1992 and played with Swinney, Lemanski Hall, Mickey Conn and Thad Turnipseed, but despite his deep Alabama roots, Greene’s father is ‘All In’ with Clemson.

“Even though he played with Dabo at Alabama, he is 120-percent all in with my decision and is super excited for me,” Greene said. “He has really has been super supportive throughout my recruiting process.”

Despite having to walk on and take the road less traveled to be a part of the Clemson football team, Greene said he’s ready to put in the work necessary.

“Absolutely. I know it's going to take a lot of hard work and dedication but I most certainly wouldn't want to do it at any other college,” he said. “I'm willing to give all of my efforts into trying to have a few plays on the field.”

After spending time with Renfrow on his most recent visit, Greene has a better idea what it takes to become a successful walk on and eventually earn a scholarship.

“Of course, Hunter Renfrow. I love that guy,” he said. “I've looked up to him at the beginning when he was first starting to make a name for himself. I've always seen myself trying to follow in his footsteps. I was able to talk to him for a little bit and the leader and the man of God that he is just really attractive. I desire to be more like him. I love Hunter.”

So, what kind of player is Clemson getting in Greene?

“I was able to talk to coach Tyler Grisham and he said I would be a fit at the '2' and '5' spots, which is more of a slot type of receiver. I'm able to make people miss more in the middle of the field,” he said.