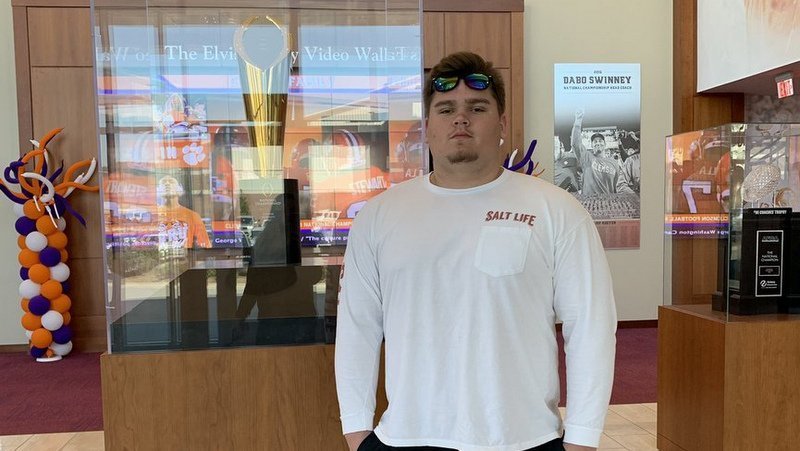 One of the nation’s fast-rising offensive line prospects for the 2021 recruiting cycle visited Clemson on Monday, and for him a recent trip to an SEC school didn’t compare to what he saw in TigerTown.

Kobe Nash is a 6-4, 322-pound guard prospect from New Market (AL) Buckhorn who decided to take part of his spring break and see some schools that are high on his list. It started with a trip to Tennessee and ended with a stop in Clemson.

“Coach (Todd) Bates and my coach talked, and they said they wanted me to pick a day to come up during spring practice,” Nash said. “He gave us some dates and me and my family decided that March 27th because my mom was off. They had interest in me, so I went up there. They’re the number one program in the country, so I was kind of excited.”

He then compared Clemson with his earlier visit to Tennessee.

“They’re both beautiful campus. Clemson is a little smaller and is homier, which I like,” Nash said. “Tennessee is more of a big, broad campus but they’re both equally nice in their own right. The coaches at Clemson acted like they wanted me more than Tennessee did. They made me feel at home and they treated my parents with as much respect as they deserve.”

Nash has picked up the usual early smaller offers (South Alabama, Southern Miss and UAB), but sees bigger offers headed his way. He hopes one is from Clemson.

“I definitely think one can be in my future,” Nash said. “He (Bates) said that he will be keeping a close eye on me and that I’m invited to their camp which I’m going to attend over the summer. Hopefully, if I keep working hard, I can get that offer. That would be a really nice offer.”

“He doesn’t sugarcoat anything, that’s for sure,” Nash said. “He’s a really nice guy but he’s going to tell you straight up what’s going on and what’s right and what he’s thinking. I like that about him. He cuts right to the chase.”

Nash was allowed to watch practice, and like the rest of the nation, two of the Tigers’ younger players stood out.

“I like and paid attention to the whole o-line, but I couldn’t help but notice Justyn Ross and Trevor Lawrence connecting a few times,” he said.

“What was the highlight?

“Definitely talking to Dabo (Swinney) for a couple of seconds. He came in during lunch and he talked to me. He’s a real good, Christian man,” Nash said. “He treated my parents with respect and he talked to them. That was definitely the highlight of the trip.”