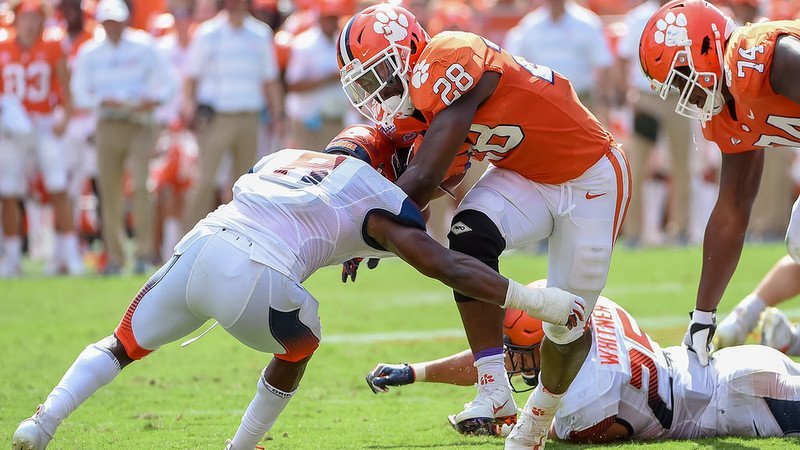 CLEMSON – It’s hard to imagine that members of the Clemson could have had a more emotional week than the one just ended, but in the end, they found the guts and resolve for a comeback win and a 94-yard game-winning drive as the clock began to run out in the fourth quarter.

The Tigers were without their top two quarterbacks (at least to begin the week) in Kelly Bryant (transfer) and Trevor Lawrence (injury). Starting right tackle Tremayne Anchrum (ankle) tried to play but couldn’t go, setting off a reshuffling of the offensive line.

Starting right guard Sean Pollard moved over to his old right tackle spot after the loss of Anchrum and walked into the interview room with a pronounced limp, a walking boot, and a look of weariness etched on his face.

“It’s been a long week,” he said before he sat down.

Indeed it has, and co-offensive coordinator Jeff Scott knew Saturday would tell them a lot about the kind of team they have.

“There’s a lot of things going on. A very emotional week for our team, obviously. As coaches, we knew that today was going to say a lot about our team,” Scott said. “Really challenged our guys - I felt that they responded this week in practice and obviously things didn’t go our way there in the first half, but I think that the way that they responded said a lot about our team. We’ve been a team, and we’ve been in those situations where we just kept fighting and kept believing. I think this is gonna be one of those learning times. I think in the past we had to lose a game to have that learning moment, and hopefully, that was what today was about. But, I’m just very proud of the offensive line. Being able to run the ball for close to 300 yards.

"That last drive – with everything that was on us, the way the game had gone, really hadn’t gone our way – and to be able to go 94 yards with the game on the line. And, they knew we were running it. Everybody knew we were running it, and I felt that we just imposed our will. All those backs got in there and ran hard – it was a great response. And, Chase Brice – what can you say about him. Very difficult circumstance. Not only to come in, but to come in when we were down and not really on our game. I’ll always remember as long as Chase is here – fourth and six with the game on the line. To be able to stand in there, that window as about three feet wide, and he threaded the needle to Tee Higgins – or we don’t win the game.”

With so many young players, the coaches feel like Saturday’s gutsy win will pay dividends down the road.

"Obviously there’s a lot to learn, but I think the biggest thing we learned is our guys have a will to win,” he said. “And, to have a special year, when you have adversity to gotta respond. I felt like our guys did that tonight. It’s been a tough and emotional week, and I think that being able to win a game like that is going to help us down the road.”

The focus now will be moving on with Bryant.

“We’ve had situations in the past where guys have left. I think about Deshaun. Two years ago that was the big story in the offseason, was all the guys that were gone,” Scott said. “We made a big point offensively that, ‘Hey, we’re not gonna worry about the guys that are gone. They had their chapter here and that was awesome, but now it’s a new chapter and it’s all about what’s next.’ Coach Swinney talks about that windshield mentality and to worry about what’s in front of us and not what’s behind us.

"Obviously, everybody loved Kelly, but his chapter’s over and it’s time for the next chapter. So, that was our big message to our guys this week, is it’s all about our guys in this room. We’ve got more than enough in that room – at quarterback and at all the other positions. To be challenged right out of the gate in the very first game, for Chase to have to go out there and win a game against a good team – Syracuse is a good football team, I don’t care what you say, they make you earn it and our guys did that in the fourth quarter.”

Co-offensive coordinator chose to talk about the players that made the trip into the Valley.

"There were a lot of emotions. I'm not gonna spend time talking about a young man that's not here. We love him, he meant a lot to our program,” Elliott said. “Obviously, things didn't go the way we wanted them to, but we're really proud of how the guys responded. They gotta go out there and play, they have to prepare, guys gotta step up. But, it was really challenging from a mental program, and I'm really proud of how our guys handled the distraction and found a way to win.

"For us to go out and win a game in the fourth quarter when we were down to our third quarterback, coming off of an emotional week, I think the leaders stepped up and found a way to win. Obviously, we love Kelly, but I don't want to spend much time talking about a guy that's not here anymore."