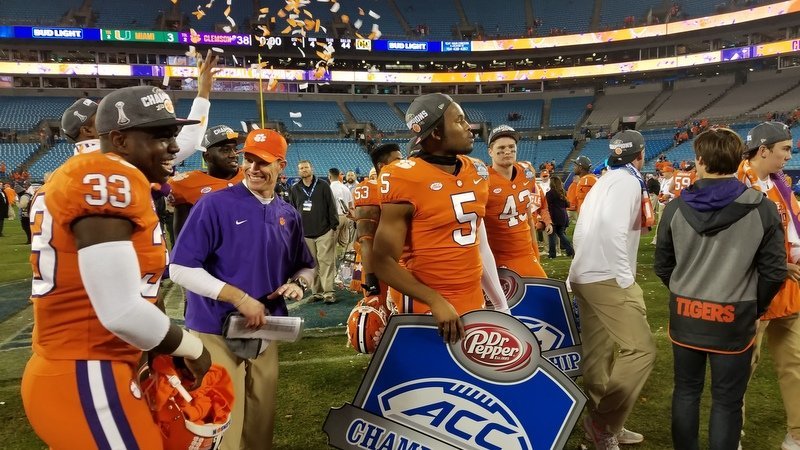 Brent Venables with confetti and his linebackers

What do a wreck, a chain, confetti and a trophy all have in common? They were a part of our weekend in Charlotte at the ACC Championship.

Clemson defeated Miami 38-3 at Bank of America Stadium Saturday night, capping a business-as-usual weekend for the top-ranked Tigers. We drove up early Friday – our goal was to be at the stadium by 11 a.m. so we could set up for the ESPN GameDay crew interviews and the coaches’ press conference at 1 p.m.

Parking around the stadium on a Friday is not easy, so I dropped Nikki off at the player entrance, dropped the car off at the media hotel and rode the media shuttle back to the stadium. During our ESPN interviews, Rece Davis dropped the bombshell that he thinks Clemson is a budding dynasty and might be the best program in all of college football.

I was planning on writing a column about just that topic, but Davis’ comments stole the story from me, and that’s ok. It’s good to see that this Clemson program is getting the national respect that it deserves. The rest of the interviews were rather bland – neither head coach said much of anything – so we walked around the playing field and waited for the team to show up for the walk thru.

Memories took me back to the same stadium, same time of day as we waited for Clemson before the 2011 ACC Championship against Virginia Tech. The coaches and players wandered the sidelines, eyes opened in wonder. It was all brand new and exciting to everybody – even the media – and the proximity to home made it a better experience than the 2009 game in Tampa.

Last Friday was different – the team walked out onto the field for a few minutes, took a few pictures and head coach Dabo Swinney gathered them together for a quick two-minute talk. The team boarded the bus – not before having to hurry one of the bus drivers from the far end of the stadium – and went back to the team hotel. It was, as I’ve said before, business as usual.

Friday night we walked from our hotel up to Epicentre for the pep rally and talked to dozens of Miami fans. There were some smack talkers for sure – every fan base has them – but most of them were simply happy to be there. It was the first trip to the title game for the Canes, and their fans were out in force. I got the impression that many of them were already expecting the worst but still wanted to enjoy the experience. Heck, one even let me try on a turnover chain.

Saturday was more of the same – walking around Charlotte it looked like Miami fans outnumbered Clemson fans. I knew that many Clemson fans would come in on Saturday for the game and leave – saving hotel dollars for the bowl trip – but I was still amazed at the number of Miami fans I saw walking the streets. I even remarked to Nikki that there were more Miami fans at GameDay and at FanFest than were in their home stadium two years ago when Clemson won 58-0. In fact, it wasn’t even close.

We took a quick nap, loaded up the gear and decided our best course of action would be to Uber to the stadium. We were about five blocks from the stadium when a young lady in a Jeep – and in a hurry – rammed the Uber vehicle from behind, sideswiping it and then running a red light in an effort to get away. I was in the back seat and took the brunt of the blow.

The girl pulled over after she ran the light, and the Uber driver blocked her in so she couldn’t get away. Nikki and I loaded our equipment on our backs and began the five-block walk to the stadium. My wife is so level-headed in everyday life that she’s almost boring (I will pay for that one). Not when it comes to football – she is superstitious and believes in the auguries and signs – and she turned to me and said with a frown, “That isn’t a good omen.”

Turns out everything was ok.

We arrived at the stadium and I found Jim Phillips, Dabo’s high school and middle school coach. Coach Phillips has been right on the money with his predictions of late – I walked out onto the field at the Fiesta Bowl last year and Phillips told me Clemson would win 34-0. I grabbed my phone and told him that Urban Meyer and Ohio St. had some insane streaks where they hadn’t been shut out, but I couldn’t convince him that the Tigers wouldn’t win by 30-plus. He was right, and it’s become a ritual of mine to ask him before every game.

Once the game was over, I made my way down to the field to video and photograph the celebration. As I’ve written before, being in the confetti never gets old, and it’s always fun to be a bystander and watch these players, coaches and their families celebrate together.

But, as great as the moment was, this program has reached a point where they all know that bigger and better things await. More predictions, more press conferences, more trophies and more confetti. Less wrecks will be ok with me, too.

We arrived back at our hotel at around 2 a.m., and two Miami fans were waiting at the front desk. They turned to each other, shrugged their shoulders and agreed that Clemson was simply the better team. No blaming it on the offensive coordinator. No blaming the head coach. No blaming it on Victory Walk. They talked in glowing terms about Clemson's defensive line, bumped fists and said, "We'll be back."

I'm sure they will, and I am sure Clemson and Miami in Charlotte might become a thing. Until then, let the best part of the year begin. Bring on that confetti.