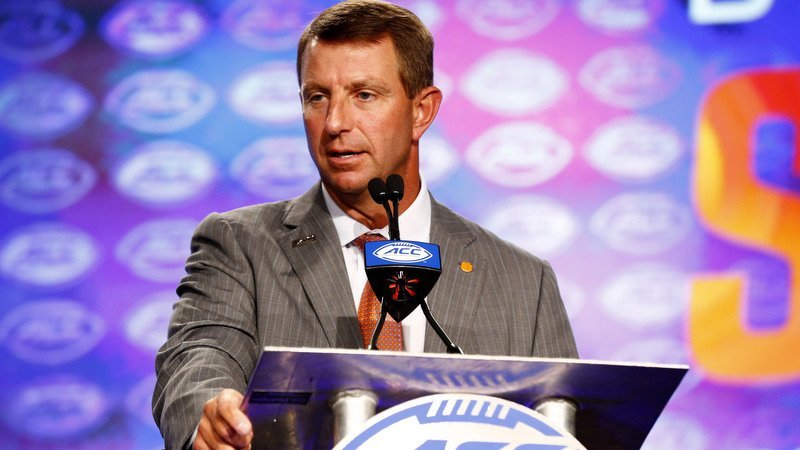 Dabo Swinney speaks to the media at the ACC Kickoff (Photo by Jeremy Brevard, USA Today)

CHARLOTTE, NC – Clemson football was a main topic of conversation at the ACC Kickoff in Charlotte last week, and TigerNet pulled some quotes from the event to share with you.

We will start with Syracuse quarterback Eric Dungey, who was asked about Tiger head coach Dabo Swinney visiting the Syracuse locker room after the Orange stunned a ranked Clemson team last October. Dungey gave Swinney some credit, but turned the attention quickly back to his own team.

“Well, the win was great, so that's what was great for us. Coach Swinney, he's a class act, so it was cool to see that. But for us personally, 4-8 -- but you look at the games, a lot of the people, a lot of reporters say, 4-8, they're a bad team,” Dungey said. “You look at our schedule, I don't see a lot of teams going on our schedule and putting up wins like that. We're in every game, and unfortunately in November I wasn't able to play, but I'm looking forward to this year and going out there and giving it all.”

Dungey said he loves to play against the Tigers.

“Awesome. They’re fun to go against, really," he said. "I love going against good competition. It’s fun, I think competition like that makes the game more fun, it’s more challenging."

He is also looking forward to playing in Death Valley.

“Going into Death Valley, it’s a different place. It’s like playing in the Dome, I’d say," he said. "It’s a major home-field advantage, it’s a vibe down there. The fans are incredible so it’s going to be tough to get a win down there. (But the 2017 win) shows that we can play with them. Clemson’s one of the best teams in the nation and we beat them, so I think guys should get confidence off that."

Orange head coach Dino Babers said he has a lot of respect for Swinney.

“Well, first of all, I was gone to the press conference, so I wasn't there. Dabo, I have a great respect for Dabo, and if I was there, I'd have let him do it,” Babers said. “He is a very unique person, a very -- I think I see him as a very truthful person. His personality and his ethics are on his sleeve, and I think he's one of those individuals in college football where what you see is what you get. I think he's exactly what you guys appear him to be. Now, I may be wrong. I've been wrong before. I've been old enough to be wrong before. But my gut tells me that I'm right about Dabo Swinney.”

“They've got a great defensive line. Great team in general. That's a rivalry game that we look forward to every year. I can't wait to see how the game is going to go this year.”

Akers was asked how Florida St. can catch back up to Clemson.

He was then asked about the rivalry between the schools.

“I feel like it's right up there with (the Florida and Miami rivalries). Personally for me, being in Florida, the Florida rivalry is a little bit bigger. But I think Clemson is just as big. A lot of people don’t like Clemson in Tally.”

“I actually did get that vibe (that FSU will get back to winning),” Burns said. “Because everybody is buying in. Once everyone has bought in and we're of one accord: I don't think anyone can stop us.”

He then said he doesn’t think Clemson has separated itself from the rest of the ACC.

“No. Clemson is an amazing team and has amazing talent and all, but I don't think they've separated themselves at all. They just have to compete like everybody else. At any given day, you can get beat by anybody.”

On what it takes to beat Clemson.

“Actually my opinion is I'm actually happy that they're the favorite and ahead of everybody else because that puts the pressure on them. While we're back behind or whatever from the media views. That's just giving us the perfect opportunity to creep up without having any notice. I like being the underdog.”

“They’re the team to beat. They’re at the mountaintop, and everybody’s trying to get there," Taggart said. "In order to be the man, you’ve got to beat the man. I wouldn’t necessarily say there’s a far separation, it’s just a matter of playing them and beating them. There won’t be a separation if you beat them.”

“We got beat. We know it. It was a sound defeat, there were no excuses," Richt said. "They were better than us that day and probably most days if we’d have played them last year. We know they’re the class of the league right now. They’re the benchmark of who you’ve got to beat to win the championship and go to the College Football Playoff. We understand that and we know it’s going to take work to get there. Hopefully we’ll get back to that game and do a better job this time around.”