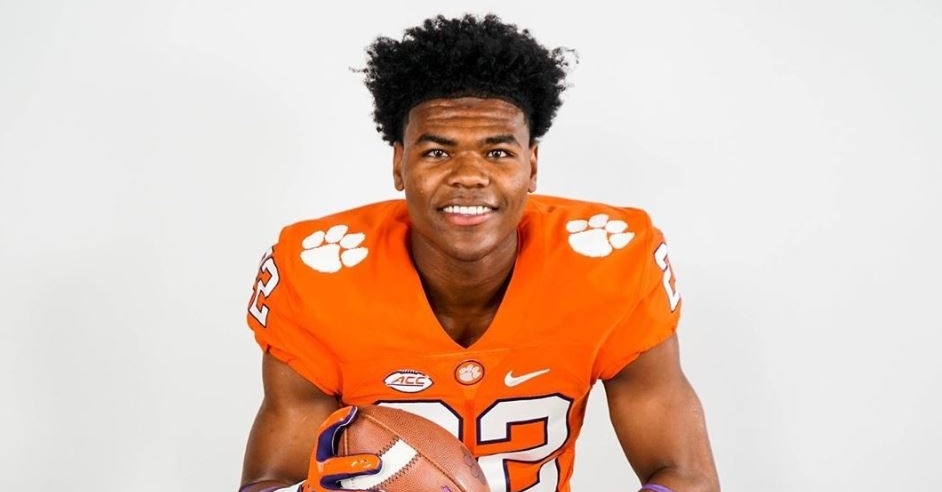 Simpson smiles for the camera during his visit this weekend

Trenton Simpson wanted to be a Clemson Tiger so bad he made his mother buy tickets to last week’s ACC Championship Game in Charlotte even though he didn’t have an offer.

Simpson, the Charlotte (NC) Mallard Creek 5-star linebacker, was offered during his official visit to Clemson on Saturday. And instead of waiting until his scheduled commitment date for Wednesday, Dec. 18, the first day of the three-day Early Signing Period, Simpson jumped on the opportunity and committed to Dabo Swinney and the defending national champs on the spot.

Simpson said he entered the visit without any expectations, including an offer.

“That wasn't my expectation but I was figuring that they were going to offer me a scholarship because I had my home visit Thursday night,” Simpson told TigerNet. “My personality and how my family is, it fits the program. They just told me to trust them. This has been my dream school since day one, so I just knew when he told me to trust them. It came down to my home visit and then I had my official visit the next day, I just prayed and let everything take care of itself. I just knew that it would work out for me in a good way.”

“The offer happened today during practice. I watched a lot of practice and towards the end, Coach Swinney called me to the middle of the field and we were just talking about my story - how I came to camp as a ninth-grader, grew up knowing Corey Crawford who was one of his former players,” Simpson said. “We were talking and he said, 'You have a scholarship to Clemson.' My mom was very excited. She got emotional. My dad was emotional. It was truly a dream come true and I'm just excited to be a Clemson Tiger now.”

Simpson pulled the trigger on a commitment immediately.

“I didn't waste any time,” he said. “Coach Swinney said, 'I know you have a lot of options and I don't know if you're going to come here, but we would love to have you.' I said, 'Coach, I'm coming.' He was very excited. The players were walking off the practice field and everybody was telling me that they were proud of me and that I just trusted the process and that's how it's supposed to be done.”

What makes Clemson his dream school?

“Just the program. I watched Clemson a lot with Corey Crawford growing up. Me watching him and him choosing Clemson and being successful in the program,” Simpson said. “Ever since we have been talking, he's told me that Dabo Swinney is a great coach and Clemson was the best fit for him. Me watching it and how there is such a tradition here and trying to be the best person you can every day, it was just the best fit for me. When I'm down here interacting with the players and how I personally connect with them, I feel like everybody is like me. Everybody has the same goal. People come here to get a great education, to play under great coaches and that's why I really chose Clemson. The personality fit and I'm comfortable here. I know that I'll be well taken care of and the people around here truly show a lot of love.”

Simpson will sign during the early signing period next week and enroll early.

“I'm coming in early and I'll be here on January 5th and I'm just looking forward to getting to work. It's a great feeling. I know my talents and I know what they have,” Simpson said. “I love to come work and I'll have the same mindset as a lot of the guys coming in because I know everyone is the same caliber as me and wants the same goals that I have. It's a great feeling knowing that I'll be playing with some awesome teammates and great people.”

Simpson loved Clemson so much he went to last week’s championship game in Charlotte.

“It was in Charlotte. I got a chance to talk to Coach V the night before and he told me they were in Charlotte and it would be a great chance for me and mom to come out,” Simpson said. “Me and mom sat down and talked about it that night and she found us tickets for an early Christmas present. We were able to go watch them win another ACC Championship. It was awesome. Watching it, I envisioned myself on the field. I know I'd fit that uniform and I can make a lot of those plays out there. It just felt great. Seeing my mom happy and knowing that she knows that I'm living my dreams, it was the greatest feeling ever.”