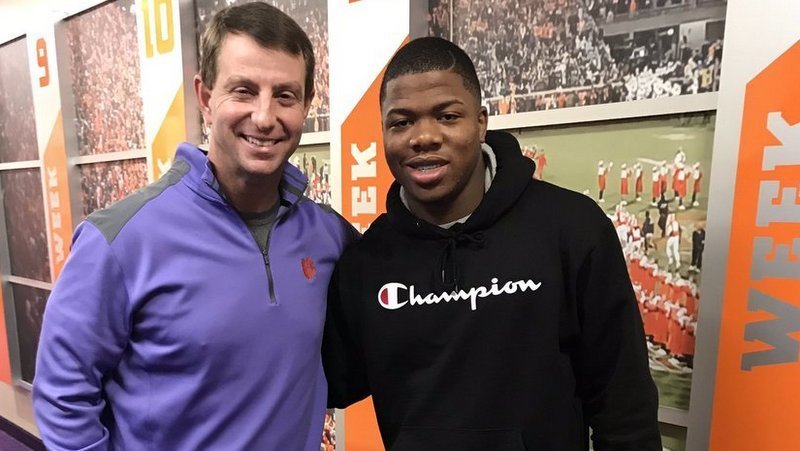 Bowman has Clemson as his leader right now

Clemson still leads for 5-star running back Demarkcus Bowman, but he still wants to wait until December to make a decision. He also expects the Tigers to make a fifth consecutive trip to the College Football Playoff.

Bowman is a 2020 playmaker out of Lakeland (FL) that stands as the top-ranked player out of the state of Florida and the No. 3 running back nationally by Rivals and the No. 2 nationally by 247. Bowman visited Clemson a few weeks ago and exited that visit by naming Clemson as the leader for his services.

Bowman made his third trip to Clemson this year last weekend for the spring game. The Tigers are attempting to pull Bowman away from Florida, the usual destination for Lakeland High products. Georgia also is strongly in the mix. Coming out of the visit, Bowman said the Tigers hold the lead but there's still a lot of recruiting ahead for him.

"They are awfully high with Florida and Georgia," Bowman said. "They are the leader right now, but I still have to visit Georgia again."

Bowman has visited Florida, most recently in February. He said Miami and Florida State are also on his short list. This past weekend's visit, Bowman said, was another good experience for him, and he was able to check off another item on his to-do list at Clemson.

"It was a good visit," Bowman said. "I really wanted to go up there and take pictures in the all purple uniforms. That was pretty cool. Coach (Tony) Elliott and Dabo (Swinney) are always nice to talk to when I get up there. And I watched the spring game again. I watched the spring game my sophomore year too. I really wanted to see what they have this year and I'm pretty sure they're going back to the playoffs.”

And the reason he feels that way is what he saw from the offense.

"It's good, they are a year older. That's about it," he said. "Travis (Etienne) and Tavien (Feaster) and Trevor Lawrence, he's got those veteran receivers on the outside."

Bowman said he does not have any other visits scheduled right now. He's looking at a December decision at this point and doesn't know yet if he'll graduate early.

Bowman is one of the most coveted running backs in the country coming off a junior season of 2417 yards and 36 touchdowns.