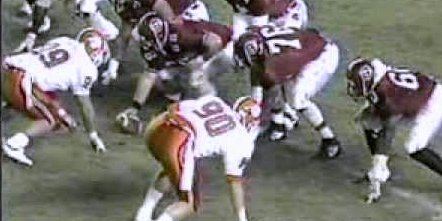 Clemson lines up against South Carolina in 1989

The Clemson football team wore orange pants for last Saturday night’s road game at Wake Forest, and they were allowed to wear the britches because head coach Dabo Swinney wants them worn in championship games.

When was the first time the Tigers wore the orange pants on the road? It was in 1989 for the South Carolina game at Williams-Brice Stadium, and it came as a shock and a surprise to the members of the Clemson football team.

The Tigers had just returned to their locker room from pregame warm-ups as they prepared to play the Gamecocks at Williams-Brice Stadium in Columbia that night. The players walked into the locker room and saw the orange pants laid out in their lockers.

Defensive tackle Vance Hammond said the locker room was “chaos” when they went in after warm-ups.

“It was like chaos, to be honest. We went out and warmed up in white,” Hammond said. “They had the orange britches in the locker room but they put them under our travel bags. We saw them and never thought anything about it. We went out and warmed up and came back in and Coach (Danny) Ford made the announcement that we were going to wear our orange britches. I just remember the equipment guys trying to get everybody's pads off and get them on the orange pants before kickoff. It was very exciting. It was an unbelievable night.”

“Coach Ford did it for us as a surprise so we wouldn't know until the day of the game,” Davis said. “As soon as we saw the orange pants you could feel the intensity go up about 10 times. For that 1989 game at Williams-Brice in Columbia, that was the hypest I ever felt. We never played in orange pants anywhere else except at home before that game.”

Clemson had not worn orange pants since losing to Florida State in 1988. Most fans remember that game as the “Puntrooskie” game when the Seminoles’ LeRoy Butler scampered 78 yards to set up a 24-21 win. The Tigers headed to Columbia with a 15-2 record in the orange pants – which debuted against South Carolina in 1980 – with the two losses coming to South Carolina in 1984 and the Florida St. loss in 1988.

The Tigers rushed for 335 yards as part of a 446-yard effort while holding Sparky Woods’ Gamecock team to just 155 total yards. The defense forced five turnovers in the shutout as Clemson rolled to a 45-0 win.

“I've never been on a field that it seemed like whatever we did it was on. It was just clicking offensively, defensively,” Hammond said. “Back then 21 or 24 points was a lot of points and we were rolling up 28. Ford was trying to run the clock out and he was like, 'I'm just trying to run the fullback. What else can I do to kill the clock other than take a knee?' The defense was on fire. It was a great way to finish off the season. It was a great year. 1989, we were coming out of 1988 and our third ACC championship and nobody knew what to really expect. For guys raised in the state of South Carolina and to have a chance to go to Williams-Brice and have a chance to participate in the Clemson-Carolina game, but to have one like that to remember is unbelievable.”

Davis remembers the Tigers dominating from the outset.

“We were scoring so rapidly and so quick. We scored so rapidly so that by the middle of the second quarter it was special,” Davis said. “We were getting to the QB and Dickie DeMasi was throwing the ball up for grabs. Dexter Davis was playing outstanding, and by halftime the majority of the stands were orange. It was fitting that we wore the orange pants because we played for our fans that night and it was a great experience.”

For Hammond, beating South Carolina isn’t a question. It’s something Clemson has to do.

“They're all special. I was there when we won with the catch. I was on the sideline with my daddy because he was a highway patrolman and he got us a sideline pass,” Hammond said. “I went before you had HDTV and I watched it on closed-circuit TVs if I couldn't get in with my daddy. It was five dollars to go to Littlejohn or the basketball stadium at Carolina (Frank Maguire Arena). It would be slam packed with people wanting to see the football game. I loved football and I loved Clemson and I wanted to see the game. This is a great time of year. It's very exciting to be a part. All of the people are excited and the colors are flying. It doesn't matter if they win a single ballgame, you've got to win this one. I don't care what anybody says. You've got to beat Carolina. You can do whatever you want, but you've got to beat Carolina. We went through that run there - I don't even want to say it - I don't ever want to go through that again.”