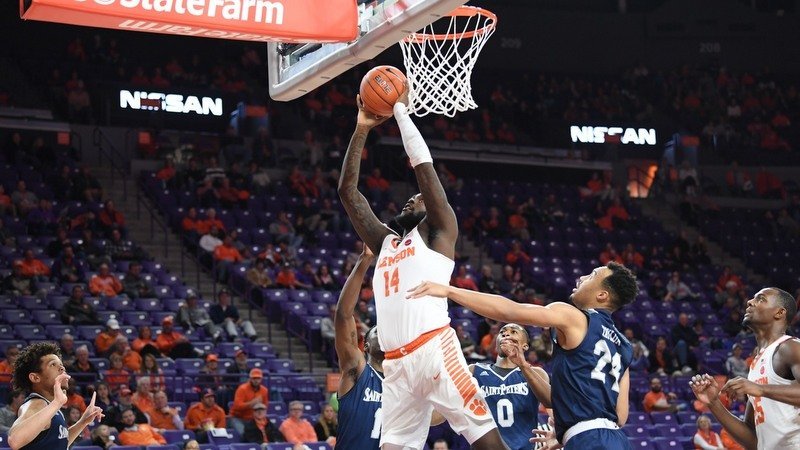 CLEMSON – Elijah Thomas scored 14 of his 17 points in the second half, powering Clemson to a 65-60 victory over St. Peter’s Tuesday night in Littlejohn Coliseum.

The Peacocks didn’t go away quietly and were tied with Clemson with just over two minutes to play in the game. Marcquise Reed led Clemson with 17 points while Mitchell added 15. Thomas, who didn’t start the game, had 12 rebounds to along with his 17 points. The Tigers struggled from 3-point range, hitting just 2-of-14 from beyond the arc.

The Peacocks played the Tigers tough in the first half. The teams traded the lead through much of the first 10 minutes, but a 3-pointer and a layup at the seven-minute mark gave the Peacocks a 20-16 lead. A layup by Clyde Trapp at the 3:26 mark put Clemson back in front at 24-23, but the Peacocks got a 3-pointer from Cameron Jones at the 2:28 mark to go up 28-24.

Two free throws from Reed with just under a minute remaining tied the score at 28-28 and that was the score at intermission. Reed led all scorers with 12 points at the break.

St. Peters came out of the half and got an old-fashioned 3-point play to go up 31-28, but Reed was fouled on a 3-point attempt on the offense end and hit all three free throws to tie the score at 31-31 barely 30 seconds into the second half.

Reed and St. Peter’s Davaughnte Turner traded 3-pointers, but Reed picked Turner’s pocket for a steal and an easy layup that gave Clemson the lead at 36-34 with 17 minutes to go in the game. Following the steal and bucket, however, Jones hit a wide-open trey from the left side and the Peacocks were back in from at 37-36.

The Peacocks eventually made it 39-36, but David Skara hit a contested floater that made it 39-38 and Reed hit one free throw on the next possession to tie the game at 39-39. Elijah Thomas then got in on the action with a layup that put Clemson ahead 41-39 at the 12-minute mark.

Thomas kept the run going, taking a pass from Trapp and backing his way into the lane for the layup. He was fouled on the play, hit the free throw, and the Tigers had their biggest lead of the night at 44-39 with 11:31 to play. The Peacocks didn’t go away, however, and back-to-back 3-pointers gave St. Peter’s the 45-44 lead with 8:30 to play in the contest.

The Peacocks held the lead over the next few minutes and led 50-49 when Thomas once again backed his way into the lane and hit a layup. He was fouled and hit the free throw and Clemson led 52-50 with just under five minutes to play. The Tigers held on the defensive end and Thomas once again made the Peacocks pay, grabbing an errant 3-pointer from Mitchell and putting it back for two points and a 54-50 lead.

The Peacocks continued to battle, and another old-fashioned 3-point play tied the game at 56-56 with 2:23 to play in the ballgame. A media timeout gave the Tigers the chance to set up a play and Mitchell’s drive to the basket put Clemson ahead 58-56 with just under two minutes to play. The Peacocks missed a long-range jumper and David Skara was fouled on the rebound. He hit one free throw and Clemson led 59-56 with 1:34 left on the game clock.

Turner hit a jumper that made it 59-58 at the 1:06 mark, but coming out of a timeout Trapp rolled a layup off the glass that put Clemson back ahead by three at 61-58 with 38.9 seconds left on the clock. The Peacocks missed a shot and fouled Thomas, who promptly hit both free throws for a 63-58 lead with under 20 seconds to play.

The Peacocks hit a quick layup that made it 63-60 and called timeout with 14 seconds to play. Mitchell was fouled and hit both free throws for a 65-60 lead with 12.6 seconds to play and the Tigers held on for the win.

Clemson vs. St. Peter's box
Get the latest Clemson gear right here!
Comment on this story