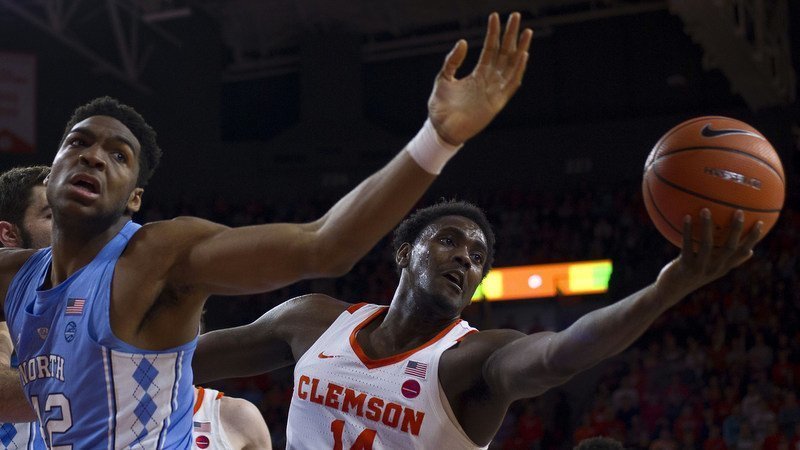 CLEMSON – Race out to a big lead and hang on for dear life was the formula that worked for Clemson Tuesday night.

No. 20 Clemson led by as many as 16 points early, survived a furious North Carolina comeback and got a big 3-pointer from Marcquise Reed late in defeating the No. 19 Tar Heels 82-78 in Littlejohn Coliseum. With the win, Clemson improves to 18-4 overall and 7-3 in the ACC. The Tar Heels have lost three in a row and fall to 16-7 overall and 5-4 in the ACC.

Clemson was led by Reed’s 20 points, while Gabe DeVoe added 17, Shelton Mitchell 16 and Elijah Thomas 11. Clemson hit 15 3-pointers, including nine in the first half. The Tigers had just 10 turnovers.

"Terrific win for our guys. I thought we played a tremendous first, especially defensively," Brownell said. "They’re hard to guard and we knew in the second half they were going to loosen up a little bit and be in attack mode and it would be much tougher to guard them. I thought our guys came out with really good confidence, shot it great. Our team feels good about the way we’re playing. You look at our stats and they were really good. We hung with them on the boards, 17 assisted baskets, only 10 turnovers, 15 made threes. It was really good to see some of my young players, my freshmen, come in and play very well and make major contributions. They had double-figure minutes and all of them made big plays. Great team win. Couldn’t be prouder of our guys and really thought three perimeter guys played at an elite level."

With the game tied at 74-74 and the game clock winding under two minutes to play, Reed calmly drained a 3-pointer from the left side that gave the Tigers a 77-74. Clemson forced UNC into a bad shot 30 seconds later, and Gabe DeVoe grabbed a crucial offensive rebound that led to an Elijah Thomas layup that made it 79-74 with 27 seconds to play.

Berry hit a jumper from the free thrown line with 16 seconds to play to make it 79-76, and the Heels fouled Mitchell as the ball came inbounds. Mitchell drained one free throw, and Clemson led 80-76 with 16 seconds left. The Heels missed a quick shot, however, and Mitchell grabbed the rebound. He was fouled with 8.8 seconds remaining and hit both free throws to make it 82-76.

Berry raced coast-to-coast for a layup that made it 82-78, and UNC called a timeout with 2.5 seconds to play.

Clemson used the 3-point shot to race out to an early lead. The Heels scored the first two baskets of the game for a 4-0 lead, but the Tigers scored 12 of the next 14 points (all on threes) to take a 12-6 lead. Each of Clemson’s first seven field goals were from beyond the arc as they took a 21-9 lead just seven minutes into the game.

The Heels pushed the Tigers into early foul trouble and trimmed the Clemson advantage to 21-14, but Clemson got two free throws from David Skara and a runner in the lane from Reed to take a 28-17 lead. The basket by Reed was Clemson’s first two-point shot of the game and came at the 7:50 mark of the first half.

The Tigers kept a working advantage the rest of the half until North Carolina was called for a flagrant foul with under a minute to play. Elijah Thomas hit one of the foul shots to make it 41-18, and Clyde Trapp drained a long 3-pointer as time expired to give Clemson a 44-28 lead at intermission.

The Tar Heels reeled off eight straight points to start the second half, but Clemson responded with a 3-point play from Trapp and a 3-pointer from DeVoe to push the lead back to 15 at 51-36. The Heels then went on a 12-1 run over the next three minutes, forcing Brownell to call a timeout with Clemson leading 52-48 with 11:43 to play.

The Heels came out of the timeout and hit a free throw to make it 52-49, and the Tigers were reeling. However, Clemson got 3-pointers from Skara and DeVoe that eventually pushed the lead to 10. UNC fought back behind Berry and Johnson and Clemson led by just two at 72-70 with 3:15 to play.

UNC continued to get big baskets from Johnson and Berry and eventually tied the game on a jumper by Berry with 2:05 to play, making it 74-74 and setting up the final two minutes.

UNC has been struggling in three-point defense, and head coach Roy Williams said he doesn't have any answers.

"I have got no answers, guys. I've never emphasized something as much in my entire life," Williams said. "But you have to congratulate them. They stepped up and made it. Gabe really got them off to a great start, and Marcquise made the biggest play after we got it tied. Somebody got lost on a screen and he made a play right in front of their bench after we had tied it. And then we come down and don't take a very good shot. We just didn't play very good defense."

Clemson returns to action Saturday, traveling to Winston-Salem to take on Wake Forest at 2 p.m. Forward Mark Donnal, who took a blow to the head in Sunday's win at Georgia Tech and didn't play Tuesday, is questionable for Saturday's game.

"Don’t know. We’re hopeful for Saturday, but he had to leave the gym today," Brownell said. "He was there in the first half and then wasn’t feeling great in the second half, so he watched the second half from the locker room."

Clemson vs. UNC boxscore
Get the latest Clemson gear right here!
Comment on this story