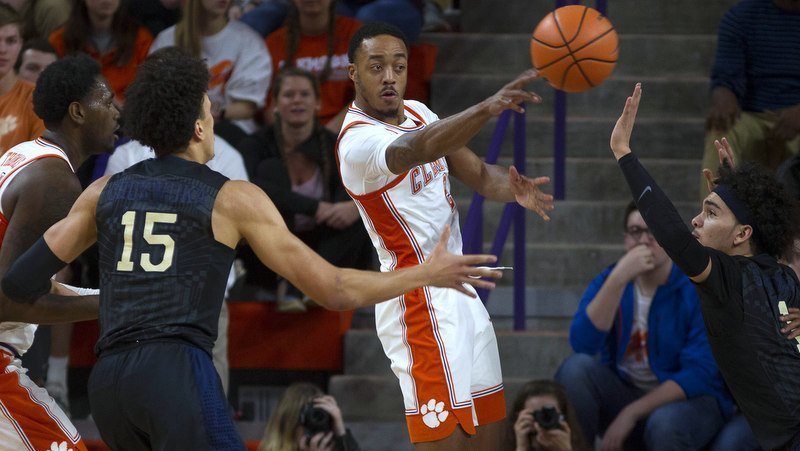 Marcquise Reed passes the ball in the first half (Photo by Josh Kelly, USAT)

CLEMSON – Gabe DeVoe and 16th-ranked Clemson are both on fire.

DeVoe tied a career-high with 25 points and the Tigers hit 12 3-pointers in routing Pitt 72-48 Thursday night in Littlejohn Coliseum, the fourth consecutive win for the Tigers. Clemson improves to 20-4 overall and 9-3 in the ACC, good for second in the league behind first-place Virginia. Clemson is now 4-3 all-time against Pitt.

Pitt falls to 8-17 overall and 0-12 in the league. The loss continues a trend of misery for the Panthers. Pitt has dropped 12 consecutive games, the longest stretch in program history. The Panthers are also 0-6 against ranked opponents this season, and they’ve dropped 16 consecutive regular-season ACC contests. The Panthers last regular season conference win was an 80-66 decision over No. 17 Florida State Feb. 18, 2017. The Panthers have lost nine consecutive ACC road contests. Pitt’s last conference road win was an 83-72 decision at Boston College Feb. 8, 2017

Shelton Mitchell added 12 points and Elijah Thomas 10 as the only other Tigers in double figures.

Marcquise Reed passes the ball in the first half (Photo by Josh Kelly, USAT)"

Clemson head coach Brad Brownell said that his team's accomplishment of 20 wins is a product of work put in over the summer and fall.

"That's great. Obviously, it's hard to do this and you've got to play well in the league and the non-league to get 20," Brownell said. "I'm just proud of our guys for how much they've poured into it, not just during the season but this summer and fall. Guys have really worked hard and given everything they've had. We've played very good basketball for a long period now. Obviously, we have an extremely difficult next couple of weeks, but I'm just super proud of our guys and what they've been able to do. 20 wins in 24 games is excellent basketball."

The Tigers played one of the most ragged first halves in recent memory, leading the Panthers by just 10 at the break. Pitt opened up with a 5-2 lead, but the Tigers went on a 10-0 run over the next two minutes to take a 12-5 lead a little over five minutes into the game.

A 3-pointer buy Mitchell gave Clemson a 19-10 lead with a little over 11 minutes to play and it looked like the Tigers might run the outmanned Panthers out of the building. However, things got sloppy and Clemson scored just 13 points the rest of the way, including no points over the final 2:17 of the half and the Tigers led 32-22 at intermission. It was tied for the lowest point total for an opponent in the first half this season (Western Carolina).

Mark Donnal nailed a 3-pointer that made it 40-26 and DeVoe followed with two more long-range shots - the last one with a foot in the paw – to put Clemson ahead 46-26 barely four minutes into the second half. A dunk by the Panthers made it 46-28, but the Tigers responded with a 10-0 run.

Pitt head coach Kevin Stallings said DeVoe was the difference in the game and that his team didn't do enough to stop the hot shooting senior.

"They hit us pretty hard there at the start of the second half. They're a team that when they start making shots, they're tough to beat," Stallings said." DeVoe got going on us. A couple of times we did a nice job on him and he still made them. He got in transition some, some on penetration, but we certainly didn't do a good enough job on him. That was kind of the difference. We didn't guard them in the second half like we would have to guard. I didn't think that our performance was really good on either end, to be honest with you."

David Skara started the run with two free throws, Donnal followed with a tip-in off the glass and Mitchell hit 3-pointers on back-to-back possessions that made it 56-28 with 14:18 to play, and it was not only a 10-0 run but a 19-2 run in a span that covered a little over three minutes.

The Tigers were able to keep a working margin the rest of the way as Pitt never threatened.

Brownell said the win was a workman-like and mature performance by his veteran squad.

"A disciplined performance by our guys. I was really pleased with the way we played," Brownell said. "I thought we showed very good maturity in our preparation. We had very good days of practice leading in and I thought it made a difference. I really thought our guys did what we wanted to do defensively and offensively I thought we shared the ball. We had very good assist-turnover numbers and executed against the difference defenses - man, zone and some zone press. Certainly, when we shoot it well again, that helps our team a lot. Just a good, disciplined performance and preparation during the week and in the performance today."

Clemson plays twice over the next ten days – at Florida St. next Tuesday and hosting Duke on Sunday, February 18.

Clemson vs. Pitt boxscore
Get the latest Clemson gear right here!
Comment on this story