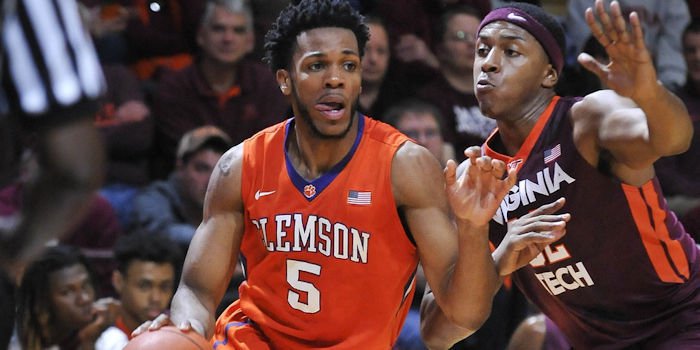 Clemson junior basketball player Jaron Blossomgame is taking part in the NBA Combine this week in Chicago, and head coach Brad Brownell said Thursday he hasn’t set a deadline for a Blossomgame decision.

If Blossomgame returns to the Tigers for his senior season, Clemson is expected to be in the hunt for an NCAA Tournament berth.

Blossomgame has to make that decision by the end of this month.

“We’ll assess the situation here shortly, and we’ll do what’s best for him,” Brownell said. “It’s a tough situation for us, certainly. We’ve just got to wait it out, and that can be hard to do sometimes, especially when it’s harder to recruit players because you don’t know if he is back or not. I don’t think (setting a deadline) is fair. I don’t think it’s fair to put a timetable on him because the situation itself is fluid.

“There will be some teams up there, my guess, is that he’ll impress in the next day or two that maybe haven’t had him as high on their board, and then they’ll want to sit with him and may even have him out. To put a date for him would be selfish, and I’m just not going to do that with our players. I made a promise to our players when I recruited them that I was going to do what’s best for them, and I stand by that, even if it’s tougher for our program.”

Brownell’s program added three transfers to the roster for the upcoming season: Shelton Mitchell from Vanderbilt, Marcquise Reed from Robert Morris and Elijah Thomas from Texas A&M, and Brownell is excited to see what all three bring to the team.

“It’s an exciting time for a lot of our guys, especially for the guys who sat out,” Brownell said. “The transfers are unbelievably excited, especially Shelton and Marcquise because of having been out all year. Elijah got here later so maybe his excitement is blossoming, I think, through the summer. Those guys are excited about being a part of it and getting back out on the floor.”