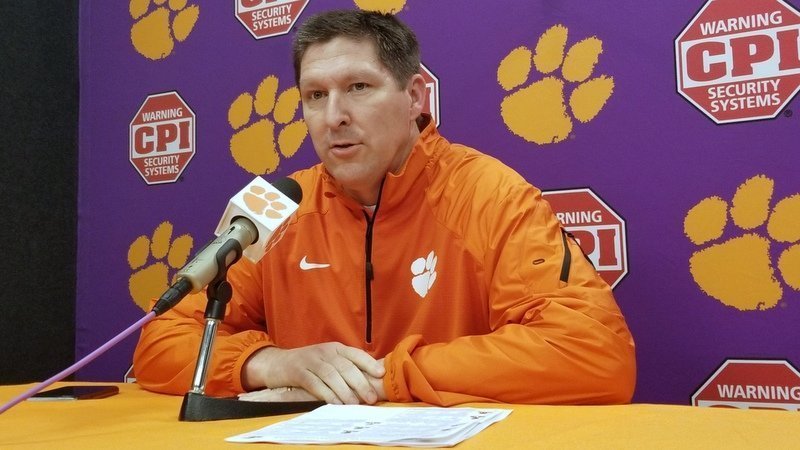 Brownell talks to the media Tuesday

CLEMSON – Just a little over a year ago, Clemson was fresh off a demoralizing loss to Oakland in the first round of the NIT, leading to message board and internet rumors that head coach Brad Brownell would be let go. Brownell didn’t bother paying attention to those rumors.

“I guess I was not worried as most,” Brownell said Tuesday. “I guess I probably should have been. Maybe I was being naive, I don’t know. But I also think that I had enough conversations with my boss most of the year that I felt okay.”

The Tigers blew a 20-point lead to Oakland, ending the season with a 17-16 record. It also marked another year in which Clemson didn’t make the NCAA Tournament, and many of the fans were restless. Brownell said he looked at the defeat as a coach – it was a bad half that didn’t define his career, the season, or his program.

“I think way too much, by everyone, was made about the second half of the NIT game,” Brownell said. “I think that would have been the biggest overreach in the history of a lot of things. It is college sports with 18-to 21-year old kids. You are going to have a bad half, and I’m going to coach bad for a half or whatever happened in that twenty minutes that caused us to lose.

A late-season swoon saw Clemson eight of its last 12 games and the program missed the tournament for a sixth straight year, and the ending to the game against Oakland led to speculation of his demise.

“This bad half was not going to be the lasting impression in everybody’s mind,” Brownell said. “They would have more reflection and dig deeper into everything that was going on in our program and see everything that happened over the last five years.”

That doesn't mean he was unaware that something needed to change - and soon.

“I knew I needed to win this year,” Brownell said. “That’s OK. This is high-level basketball. You need to win.”

Brownell was, of course, spent referring to all of the time the team spent without a home. Littlejohn Coliseum was being rebuilt and the team endured 20 months without a true place to call home. Home games were played in Greenville, a 45-minute drive, and the team was forced to share their only practice site with the women’s basketball team and the volleyball team.

Instead of complaining about things, Brownell dug in and made regular tours across the state, trying to help raise funds for the sparkling new facility that is already paying dividends.

“This has been more than a one-year deal. This has been a five-year struggle. This did not just happen with this year and this team. This happened because of the facilities and all the things that went into it. I think that is why I was retained. It was not just one bad half of basketball.”

Clemson has a 25-9 record this season, a school record for wins. They finished third in the ACC after being picked to finish 13th by the media, and they play Kansas this Friday in the Sweet 16.