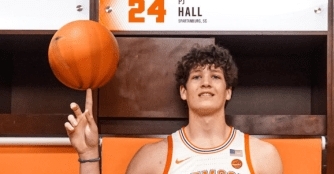 Have yourself a week, Clemson basketball.

Clemson basketball coach Brad Brownell, who came up short in recent in-state recruiting efforts with Zion Williamson and Josiah-Jordan James, won a major recruiting victory Wednesday when the state’s top player in the 2020 class, 6-10 PJ Hall of Dorman, announced a commitment during a ceremony at the Dorman Arena.

A day later, 6-7 forward Olivier-Maxence Prosper of Quebec announced a commitment to the Tigers on Twitter. Prosper attends the NBA Academy Latin America in Mexico City. He recently reclassified from the 2021 recruiting class.

Hall had narrowed his destinations down to Clemson, Florida and Virginia Tech. He also considered Tennessee and Georgia Tech during the latter part of his recruitment. Hall’s family has strong ties to each of the three finalists. His sister plays volleyball at Florida and Virginia Tech’s Mike Young had been an assistant coach to his father during his playing days at Wofford. But in the end, Clemson, the school he had visited the most often, was the choice.

Hall said he did not grow up a Clemson fan, but his visits there, and most notably his official visit last month planted that see in his mind that Brownell’s program was the best fit for him.

“There wasn’t a bad thing that happened on that visit,” Hall said. “I love the team. I love the campus. Everything that went on, the energy. There’s nothing like Clemson. I knew that that was my favorite right then and I knew that if I went to the other schools that I could see if there was another school I could be at, but in the end, I knew there was nothing else once I got finished with my visits. I can’t wait to go there, win some games and put Clemson basketball on the map. We’re going to do some big things up there.”

Hall thinks he is a perfect fit in Brownell’s scheme.

“The way they use their big men,” Hall said. “I know that being a four-man, a skilled big man that I can get the ball in my hands on almost every possession. I know that I can go out there and help them win, help them dominate the ACC, and I can’t wait to get out there.”

Hall said one of the big selling points to him by Clemson is the type of offense Brownell likes to run, with five men out away from the basket, including the bigs. And he also appreciates Brownell’s reputation for rewarding playing time for playing great defense.

Hall’s recruitment may be behind him, but his time as a recruiter has just begun. As is often the case, high-profile recruits bring other talent along with them. Hall referenced that possibility just moments after announcing his commitment to the Tigers. “I can’t wait to try to get more South Carolina kids,” he said. “We need some more of those. He (Brownell) told me “hometown hero” a few years ago, and I never forgot that. Hometown hero sounds great to me.”

Prosper is an intriguing prospect. This past summer, Prosper played in five games for the Academy and he averaged nearly 17 points and 6 rebounds per game. He shot 38 percent from three and made 9-12 free throw attempts. Prosper's AAU club was Brookwood Elite in Canada.

His coach there, Joey McKitterick, said Clemson is getting a fine person and player in Prosper.

"As a kid, he is an A-1 kid, charismatic, a natural leader, hard worker," McKitterick said. "He is a natural fit for the ACC. He can guard multiple position and plays with a great motor that leads him to manufacture points. He has the ability to score from all 3 levels."