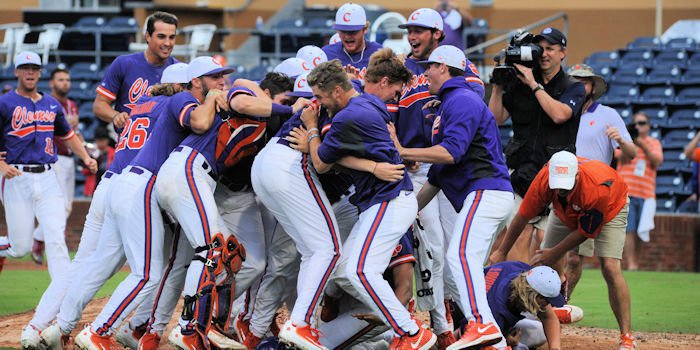 When the players spend more time in the locker room – four hours and 48 minutes of rain delays – than they do on the field, it’s up to the coaches and team leaders to figure out how to best spend that time.

For Clemson, it was playing a party game known as Mafia, in which each participant is given a Mafia role and then potentially killed off during the night phase until someone figure out who the murderer is.

It might sound crude, but for Chris Okey, it was a way to keep his teammates together and not involved in their cell phones.

“It's a game called the Mafia. It's kind of hard to explain. Gets everyone involved,” Okey said of the rain delay activity. “Everyone has their own little role, and it gives everyone a chance to kind of laugh and make fun of each other and get mad at each other at the same time. It worked.”

With so much time to kill in between bouts on the field, Okey said he had to find a way to keep his teammates energized and focused on the task at hand.

“It actually wasn't even me. It was Coach (Bradley) LeCroy,” Okey said. “I was actually watching the game on TV. I went to go throw some trash away, and he gave me the idea of, hey, go around and take everyone's phones. And I looked around and sure enough, everyone is on their phone. I said, ‘I'll do it, see what happens.’ Unfortunately, I've probably been in that group but I left my phone on the bus. So yeah, I took their phones out and then they got all pissed off a little bit. I said, ‘let's play a game, help us smile a little more.’ Got them out there, got them loose and we just won the ACC Championship, so let's do it.”

The game must have worked because when the team emerged from the dugout for the final six innings, they were as loose as they had been all game and determined to finish the job at hand and beat the Florida State Seminoles for the ACC Championship.

“Well, I'll answer that, and maybe I'll answer it a little bit and give Chris Okey some credit. Chris Okey is the leader of our ballclub. Has been since day one,” Lee said of Okey. “When we gave up the eight-spot in the eighth inning and came in for that last delay, the guys were in the locker room and I kind of stuck my head in there, I was running around and trying to figure out what the weather was going to do. And I walk in, and Okey has the guys, made them take all their cell phones away and made them participate in a team activity to loosen them up. And I didn't need to do anything.”

That leadership is one of the reasons Clemson is in the position it’s in – ACC Champion and vying for a national seed in the upcoming NCAA Tournament.

“We preached to our guys, I've preached to this team, that if we want to achieve great things, the leaders on this team have to police themselves, and that's a big part of leadership is you've got to police the ball club and Chris Okey did that,” Lee said. “And when the team came back out, they were laughing, and they were loose, and they were ready to go, and they were confident. That's a testament to him. This is a guy that we all know here in a few weeks is going to be a pretty good draft pick, and he shows up every single day, whether he's swinging the bat well, not swinging the bat well, he catches every single pitch of every single inning for us for the most part. I've asked him if he wants time off. He says no, I'm ready to go, I want to play, I want to catch. He's a tremendous leader. He's a guy that's going to be successful for a long, long time in whatever it is that he chooses to do because of his leadership.

“It's guys like Mike Triller, guys like Alex Bostic; these two guys on my left probably haven't gotten the opportunities that they would have liked to have had, and part of that is my fault. I haven't put them in there probably as much as I should have. But when we needed them the most in the ACC Championship game, Alex Bostic stepped up and pitched like a real guy against a really good lineup. And Mike Triller is a fifth-year senior, hasn't gotten many opportunities, and we put him in the lineup. He winds up being the MVP of the tournament. So there're some great story lines, but just shows you the common belief in this group of guys and what they have been through together that they have policed themselves, and they have led this team. So I'm just happy and proud of them. It's a testament to what these guys have done. It's just an awesome feeling for me as a head coach.”