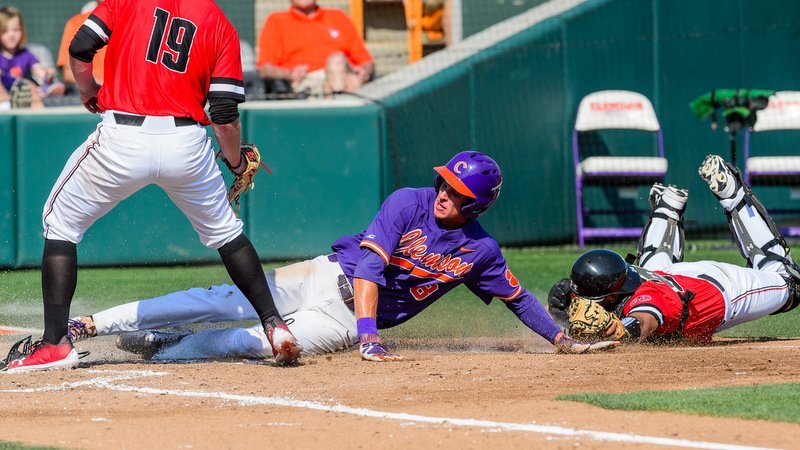 CLEMSON, S.C. - Brooks Crawford struck out a career-high 10 batters and Logan Davidson went 3-for-3 with a homer, two doubles, four RBIs, four runs, two walks and two steals to lead No. 5 Clemson to a 10-1 victory over Austin Peay at Doug Kingsmore Stadium on Saturday afternoon. The Tigers, who evened the series 1-1, improved to 38-13, while the Governors dropped to 30-21. It was also Monte Lee's 400th career victory as a head coach.

Crawford (7-2) earned his sixth win in his last seven starts by yielding just four hits, one run and no walks with 10 strikeouts, the most by a Tiger in 2018, in 6.2 innings pitched. Crawford, whose previous career-high-strikeout total was five, also allowed just one Governor to advance past second base. Carson Spiers pitched the final 2.1 innings to record his fourth save of the year. Jacques Pucheu (7-2) suffered the loss, as he surrendered three hits, four runs (three earned) and five walks with 10 strikeouts in 6.1 innings pitched.

Davidson led off the first inning with his 11th homer of the season to extend his hitting streak to 12 games, then Austin Peay scored a run in the top of the third inning.

It was all Davidson in the third. He led off the inning with a walk, stole second, moved to third on an errant throw and came around to score on a wild pitch to make it 2-1.

Jordan Greene walked to lead off the fifth and came around to score on Davidson's double to left, and the Tigers held a tenuous 3-1 lead.

The Tigers broke it open in the seventh inning, and Davidson was once again in the middle of the rally. He walked with one out, stole second, and moved to third on a failed pickoff attempt. Seth Beer walked to put runners at the corner, and Kyle Wilkie, who earlier extended his hitting streak to 17 games, laced a run-scoring double, the only hit in Clemson's four-run frame.

The Tigers added three runs in the eighth inning, highlighted by Davidson's two-run double. Patrick Cromwell singled and moved to second on Greene's walk. Davidson stroked a double to right-center to score both runners, and Davidson later came aorund to score on Chris Williams' groundout.

The series concludes Sunday at 1 p.m., on ACC Network Extra. Sunday is Senior Day, as Clemson honors its seniors during pregame festivities.