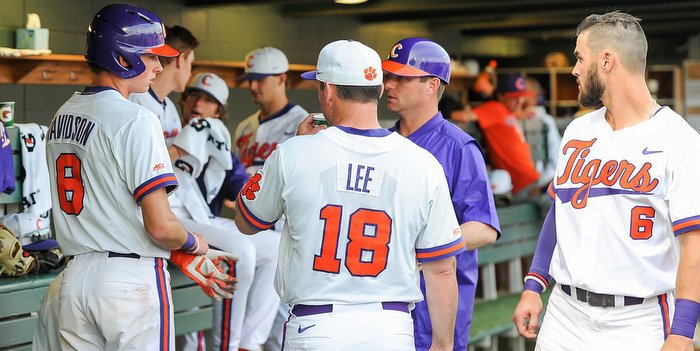 Monte Lee with a teachable moment during Saturday's series finale

CLEMSON – Following Clemson’s loss to Wake Forest in the finale of Saturday’s doubleheader, head coach Monte Lee gathered his entire team on the edge of the outfield grass and spent nearly 15 minutes in conversation with his players.

Why? Because every moment is a teachable moment, especially when you know your team has a chance to be a special and has a chance to play tournament baseball down the road.

Clemson won the first two games of the series with the Demon Deacons – winning the series – and held a 2-1 lead in the middle innings of the nightcap. It all fell apart from there, however, as Wake Forest fought back for an 8-3 win.

Clemson is ranked third nationally by D1Baseball.com and sixth nationally by Baseball America with a 33-8 overall record, including 16-5 in the ACC. The Tigers host the College of Charleston Tuesday night, then head back out on the road for a crucial series in Chapel Hill against North Carolina. The Tar Heels are 31-9 overall and 16-5 in the ACC. Clemson trails first-place Louisville by a game in the Atlantic, while the Heels (third in Baseball America and fourth in D1) are in first place in the ACC Coastal.

The Tigers also have ACC series remaining against Louisville and N.C. State.

“We have another big series in front of us, but they are all big from here on out,” Lee said Sunday.

The Tigers are still in position to claim a national seed in the NCAA Tournament and perhaps the number one seed in the ACC Tournament. With that in mind, Lee let his passion for his players show through in the meeting.

“Sometimes my meetings get long-winded because I am just passionate about trying to teach my players,” Lee said. “Sometimes I talk way too much, but I only do it because I care about them and I want them to try and develop as individuals and as players. I always try to find teachable moments whether we win or lose.

“It was just a number of things that I went over with the guys - our fundamental beliefs and what we believe make us successful. Just offensive approaches, pitching and defensive approaches and the mental approach to the game.”

Lee knows that if his team advances into the post-season, and wants to advance past a regional, they will have to learn to play more than one game in a day.

“This is the first time - and this is not an excuse it's just something we need to learn from - it's the first time we've played 18 innings in one day,” Lee said. “We have to be able to play pitch-by-pitch baseball in that situation, because if we are blessed and fortunate enough to play in the postseason, then we might have to play two games in one day. We have to understand that on a doubleheader day, the biggest challenge isn't the physical challenge of playing 18 innings. They are 18 to 22 years old, and they don't get physically tired. It's the mental fatigue of the game and being able to stay locked in even when you've won the series. Really good teams have to be able to do that.”