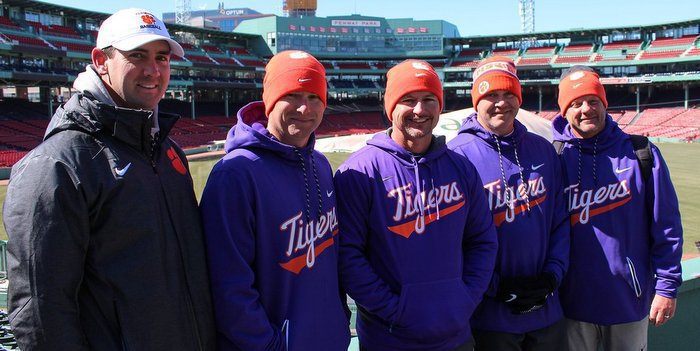 Most college students see spring break as a chance to get away from school and take a trip to the beach with friends or head home to see friends and family.

But while many Clemson students were enjoying the revelry of spring break at the myriad beaches that span the coast, Clemson’s baseball team was busy playing four games and traveling from Clemson to Charleston to Boston to Rhode Island to Boston and back home through Charlotte. They went from relatively warm weather in Clemson to warmer weather in Charleston, then traded it all in for freezing temperatures in Rhode Island.

Thanks to head coach Monte Lee and Director of Operations Brad Owens, they had as good of a spring break as a college baseball player could ask to have.

The Tigers played the College of Charleston last Tuesday, then flew to take on Boston College in a series that started last Friday. With the trip starting by bus in Clemson on Monday, Lee wanted to use the trip as a chance to bring his team closer.

“I told the guys when we went on the spring break trip, and went to the Northeast, that this was a time for us as a team to bond and spend our time together,” Lee told TigerNet. “So we did some team meals together, instead of doing the meal money deal.”

The fun started with karaoke on the bus trip to Charleston, where bullpen catcher Mark Estes turned in a rendition of “Ice Ice Baby” that many members of the team termed “legit.” 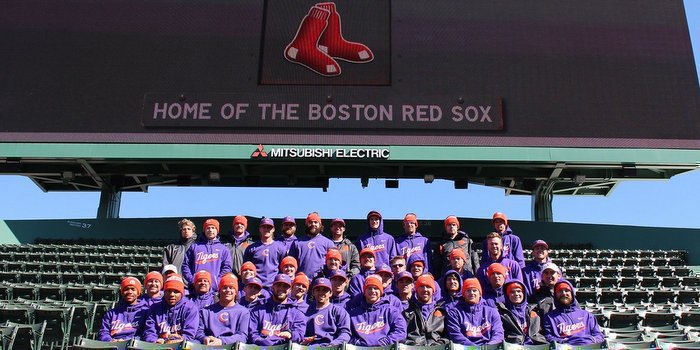 “We did some really fun things on the bus on the way there,” Lee said. “They had karaoke on the bus which I thought was hilarious. Actually, our bullpen catcher Mark. He sang Ice Ice Baby to a tee. But it was fun. We had a great cookout down in Charleston as a team. They wore random jerseys on the bus, and we had a lot of fun. It's just embracing the team concept.”

The Tigers have gotten off to a blistering 22-4 start to the season, and they are 8-0 in games at neutral site locations or at opposing ballparks, something Lee credits to making sure his team has fun.

The team arrived in Boston Wednesday afternoon and attended the Boston Celtics home game against Indiana. Thursday, the team toured iconic Fenway Park and worked out in the park’s indoor hitting cages.

“We went to see Celtics and hit in the cages at Fenway. We got to tour Fenway. We had a blast,” Lee said. “It was a lot of fun. I think it helped build some camaraderie and team chemistry. It really came about with Brad, our director of operations. It was really just putting our heads together and saying, hey, what are some fun things we can do with the team. He had a connection with the Red Sox so he was able to line up the opportunity for us to tour Fenway and hit in the cages there.”

“I grew up a huge Larry Bird fan, so I was pumped. I was the only one that didn't have a jersey so I bought a Larry Bird jersey and wore it during the game to fit in with all the players,” he said. “At the end of the day when their time is up here at Clemson, I want them to look back and remember seeing the Celtics and going to Fenway and all of the cool things we did as a team outside of playing. If you do that, they tend to play a little harder and they enjoy playing together a little more.”

Catcher Chris Williams said the trip brought a team that finished the road trip 4-0 closer together.

“It was awesome. I wish we could have been in Charleston a little longer with the warm weather, but going to Boston was fantastic,” Williams said. “We went to see the Celtics and then we saw Fenway Park and played in Rhode Island, which is a pretty place. We just had some time to relax as a team, not worry about school, and just hang out with each other.

“When we were in Charleston before the game everybody got together and hung out. Not everyone was together, but everyone hung out with new people. And then in Boston, we went out and got some ice cream the night before. It made everybody closer. You grow up watching these historical games at places like Fenway and you always dream about playing there.”

Had a great time taking BP & touring the one & only @fenwaypark today! #Clemson @RedSox pic.twitter.com/IkvuDa494R

Boys doing work at Fenway! Pinder trying to show off the guns in the compression top pic.twitter.com/Bjv5KGBeXe

Finishing the travel day watching the @celtics in Boston! pic.twitter.com/r76EwZgjJI

Me and the boys enjoying the Celtics tonight! pic.twitter.com/GLAnSY6iNU

Tigers travel to Charleston & enjoy some time together. #ClemsonFamily ?? pic.twitter.com/fkB6I1IQV8