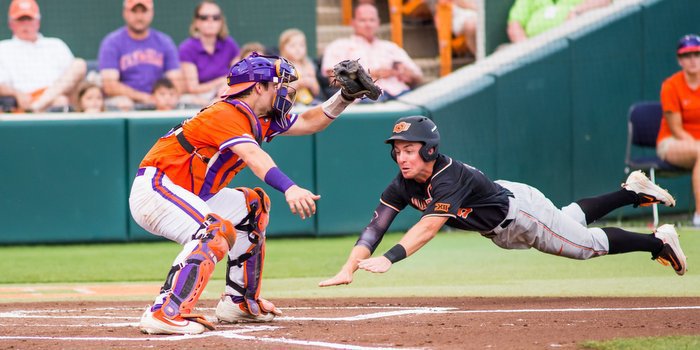 CLEMSON – The Cardiac Cats ran out of miracles against the Cowboys.

Clemson’s tendency to overcome significant deficits didn’t appear Saturday night as Oklahoma St. jumped out to an 8-0 lead in the first innings and never looked back in cruising to a 12-2 victory in the fourth game of the Clemson Regional at Doug Kingsmore Stadium.

"We have been in this position many, many times this year where we have been beat. Our team has always found a way to respond and give ourselves a chance to the following day," Clemson head coach Monte Lee said. "That is what we are going to have to do. We are going to have to get in bed, get some rest, forget about this ball game and get ready to play at 12:00 tomorrow. Every game is your season. So we got to find a way to win that one, and then we will take it from there if we are fortunate if enough to win the next ball game."

Oklahoma St. improves to 38-20 with the win, while Clemson’s ten-game winning streak was snapped and they fall to 43-19 on the season. 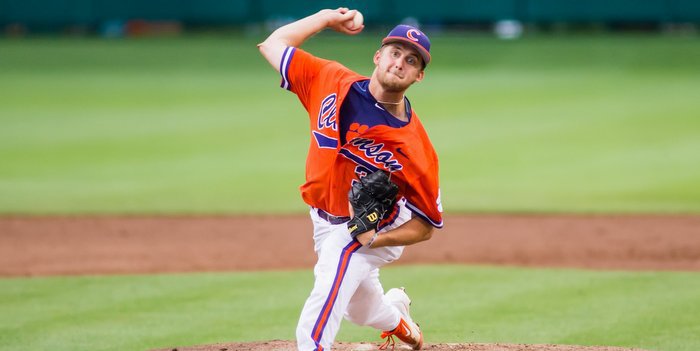 "I thought overall they outplayed us in every phase of the game," Lee said. "Outhit us. Better than us on defense. Better than us on the mound. You got to give Josh Holliday, their head coach, a lot of credit for getting his team ready to play, and they played at a high level and beat us soundly."

Chase Pinder, Reed Rohlman, Chris Williams and Andrew Cox each had two hits for the Tigers, but the Tigers committed four errors.

Starter Clate Schmidt ran into trouble early and often. Oklahoma St. scored two runs in the first on three hard hits, two walks and a passed ball for the early 2-0 lead. Jon Littell singled to start the second, moved to second on a sacrifice and scored on a two-out double to left-center by Corey Hassell for a 3-0 Cowboy lead.

Schmidt ran out of gas in the third, but his cause wasn’t helped by his defense. Eli White’s error started the inning for the Cowboys, and Seth Beer ran the wrong way on a fly ball to put the first two runners on base. Seven batters later the Cowboys had scored five more runs and had an 8-0 lead.

The Tigers answered back in the bottom of the inning. Chris Williams drew a leadoff walk and moved to third on a double into the left field corner by Andrew Cox. Chase Pinder bounced into a grounder to third that scored Williams, and the Tigers were on the board with one out. Cox moved to third on the play, and White bounced to short and Cox tried to score on the play but was called out after a close and controversial play at the plate. Beer walked but Chris Okey fouled out to end the threat with Clemson trailing 8-1.

Mike Triller hit a one-out double into the left field gap in the ninth inning and scored on a double by Cox for Clemson's final run.

Clemson vs. Oklahoma St. Photos >>
Clemson vs OSU Boxscore
Get the latest Clemson gear right here!
Comment on this story