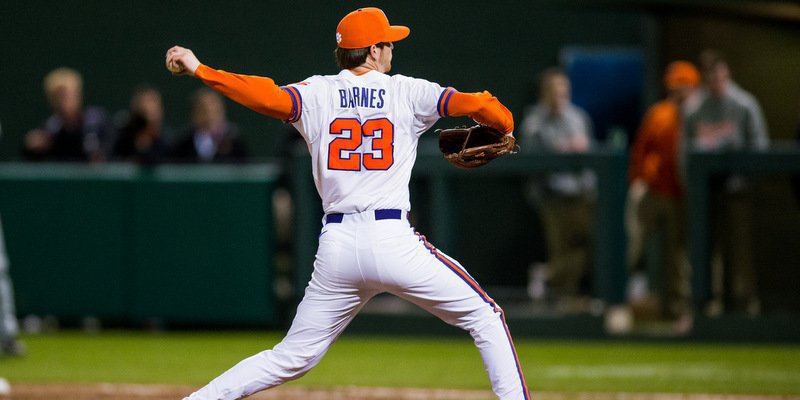 Chris Williams likely won't be able to catch this week

Monte Lee knows he has to win game one, so he’s throwing all he’s got at Duke.

The 2017 ACC Tournament features a pool-play format, leading into a four-team, single elimination bracket. Each team in the four pools plays one game against each of the other two in its pool Tuesday-Friday, May 23-26. The four teams with the best records within their respective pools advance to Saturday's semifinals, then the winners play Sunday in the ACC Championship Game.

Virginia (No. 4 seed) is the highest seed in Pool D, so they will advance if they go 2-0 or tie with another team with a 1-1 record. That means Clemson has to beat Duke Tuesday if they hope to have any chance of advancing past Friday’s game against Duke.

As a result, Lee is throwing his Friday starter at the Blue Devils.

“We’re planning on starting (Charlie) Barnes. He’ll be on four days rest so he should be good to go,” Lee said. “We’ll also have (Alex) Eubanks available out of the bullpen. We can use Alex out of the pen on Tuesday. Pat Krall probably will not be available. He’s going to want the ball at the end of the game, but he’s only going to be on two full days rest so I don’t think we’ll do that. We’re going to do everything we can to win game one. We’re going to go with Barnes and if we need Eubanks out of the pen, we’ll use Eubanks to try to get that win.”

The two-day layoff in between games gives the staff the opportunity to look at the best option for Friday. 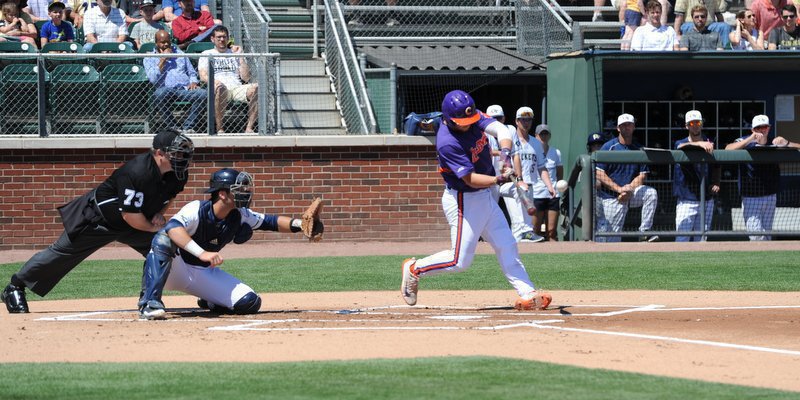 Chris Williams likely won't be able to catch this week "

“It will give us the opportunity with two full days off on Wednesday and Thursday to make the decision on if we’ll start Eubanks in game two or do we start Krall on Friday and use Eubanks out of the pen or hold him for a game three start or do we start Eubanks on Friday and use Krall out of the pen,” Lee said. “The bottom line for us in terms of our game plan is we will use the guys we have available to win game one and once we win game one we’ll let the dust settle and figure out what we’re going to do in game two in terms of who we’ve used and how many pitches they’ve thrown. The good news is we’ve got a guy in Eubanks that can start or pitch out of the pen and the same thing with Krall, and we have Tyler Jackson who we can start. Hopefully, we’re in a position to make that decision because it means we’ve made a deep run in the tournament.”

Starting center fielder Chase Pinder left Friday’s loss at N.C. State after injuring his knee on a diving attempt for a ball near the wall, and he missed Saturday’s series finale. However, Lee said he expects Pinder to be in the lineup Tuesday.

“Pinder should be okay. We’re actually getting ready to fly out here in a little bit and he is scheduled to practice,” Lee said. “As long as he feels okay, he’ll be able to practice at 100-percent today. He had some swelling in his knee from where he ran into the wall at N.C. State, but we expect Pinder to be 100 percent and ready to go unless we get into practice today and he’s not feeling as good as we anticipate.”

Catcher Chris Williams hasn’t caught a game since injuring his shoulder three weeks ago against Nevada but has played as the designated hitter, and Lee said he expects more of the same this week.

“Chris Williams will more than likely only be able to DH. We don’t feel like his arm is at 100 percent and that he will be ready or available to catch,” Lee said. “He will play catch today and we’ll see how he feels and that could be adjusted based on how he feels, but it would be my expectation right now that we would not be able to use him behind the plate.”

On how injuries have affected his team

“We’re never going to use it as an excuse, but if you’ve got a guy behind the plate that hasn’t been back there a whole lot and he’s trying to block a slider coming in at 83 or 84 mph in the dirt to get a swing and miss, it’s a tough thing to do to block a breaking ball in the dirt with runners on base. It’s extremely hard to do when you haven’t been back there. Chris has been our guy and has been back there every single day when he’s been healthy. Whether it’s (Robert) Jolly or (Kyle) Wilkie, those guys aren’t nearly as experienced as Chris and it’s not an excuse. It’s just a fact. Sometimes as a coach, you may decide we need to elevate a fastball as opposed to throwing a breaking ball.

“It’s a factor of experience more than anything. When you put somebody in the most difficult position to play on the field and he doesn’t have a ton or reps because he’s not your starter, it’s not easy. I would think that anybody would tell you that anytime your number two or number three catcher is now your guy, that’s not ideal but it is what it is. Hopefully, with the experience that Wilkie is getting more and more comfortable and ready. I thought he did a nice job for us in game three against N.C. State. The more reps he gets, the more comfortable he’s going to get.

“The domino effect is going to hurt you. You take Pinder and Williams out of our lineup and it’s a different lineup and a different defense. Everybody has to deal with that. It’s not an excuse. We lost Ryan Miller and Brooks Crawford for the second half of the season. Ryan Miller at the time, was 1A and 1B in the closer role with Ryley Gilliam and you take that arm out of the bullpen and it’s a huge blow. Brooks Crawford has been dealing with mono for the second half of the season. You take two guys out of the pen that are throwing meaningful innings and that can hurt you as well. It is what it is. You have to deal with it and hopefully, some other guys around them will step up and fulfill meaningful innings and meaningful roles in our lineup.”