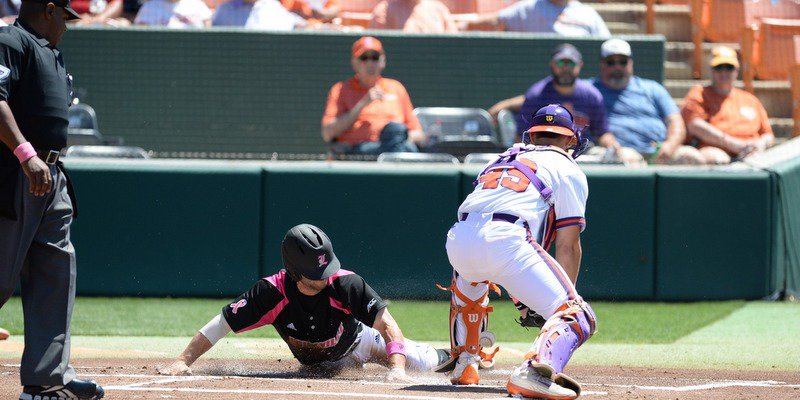 CLEMSON – Sunday’s series finale against Louisville featured a familiar refrain. The Tigers do enough to take the lead, but a lack of timely hitting late in the game leads to another loss.

Louisville continued Clemson’s recent struggles, sweeping the Tigers with a 6-4 victory on Mother’s Day at Doug Kingsmore Stadium. Clemson finished 1-8 against ACC heavyweights FSU, UNC and Louisville, and has lost eight in a row in the regular season to the Cardinals.

"Give Louisville a lot of credit. They’re one of the best teams in the country and even when they didn’t play their best baseball they found a way to win the game, and that’s what great teams do," head coach Monte Lee said after the game. "I really appreciate our fan support this weekend. We had great turnouts. I really appreciate them supporting our players and our team. Obviously, I feel really bad about how bad it turned out this weekend. I apologize to our fans."

Lee said the Tigers have not only not produced, they've run into tough luck along the way. 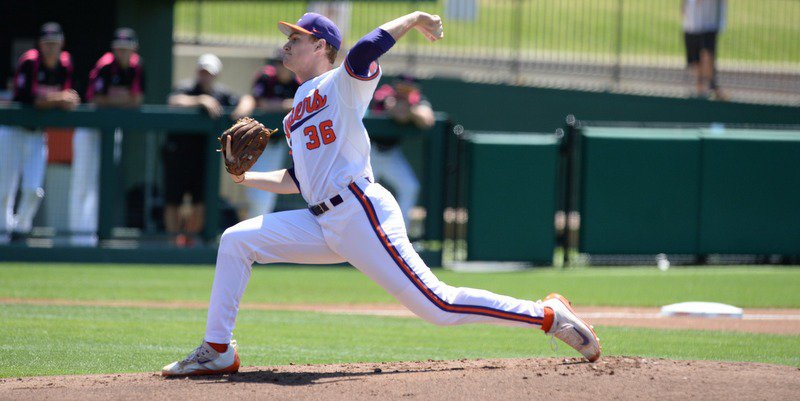 "I’ve got to try and find a way to get our guys to push across another run or two," Lee said. "I think that’s the bottom line. We threw the ball well today. Defensively, we played pretty good baseball. We had a great ninth inning - got two guys on with Chris Williams. Chris lined out to centerfield, representing the winning run at that point. We swung the bats okay in early in the ballgame, but the bottom line is we could only score four runs. We had some tough luck, too. We had the balk called late that gave them a run and then on Seth Beer’s sac fly opportunity with Reed at third base, Reed just fell down trying to tag at third. That’s tough luck and it’s not anybody’s fault."

Louisville got things going off starter Pat Krall in the first. A single, a bunt and a sacrifice fly gave the Cardinals an early 1-0 lead. The Tigers answered in the bottom of the frame after the Cardinals dropped a fly ball off the bat of Reed Rohlman. Pinder continued his hot hitting by homering down the left field line for a 2-1 lead. It was his sixth homer of the season.

Drew Ellis led off the second for Louisville with his second homer in two days, a shot down the left field line that tied the score at 2-2. Krall gave up a single, but it looked like he might get out of the inning after two strikeouts. However, a wild pitch moved the runner to second and an error by third baseman Grayson Byrd scored the go-ahead run and Louisville led 3-2.

The Tigers loaded the bases with no out in the bottom of the third, but managed only one run despite the middle of the lineup due. Seth Beer struck out looking, but Chris Williams hit a short sacrifice fly to right that scored Logan Davidson with the tying run.

The Tigers blew an opportunity to take the lead in the fifth. Rohlman led off with a double to left, and he moved to third on a fly to right. Beer popped up to short center, but Rohlman attempted to leave early and then fell down and was still there when the inning ended.

The Cardinals retook the lead in the sixth. Colby Fitch led off with a single to right, and moved to second on a sacrifice bunt. Krall got a big out by getting Brendan McKay to fly to deep right, but Fitch moved to third. Krall intentionally walked Ellis, but Devin Mann singled to left, scoring Fitch for the 4-3 lead.

The Tigers failed to cash in another opportunity in the sixth. Andrew Cox reached on an error, and Jordan Greene reached on a bunt to put runners at first and second with no out. Byrd failed to get down a bunt on the first pitch, and Monte Lee pulled him in favor of pinch-hitter Weston Jackson. Jackson struck out for the first out, and Kyle Wilkie bounced into an inning ending double play.

A single, a double and sacrifice fly for Louisville’s fifth run chased Krall in the seventh. He went 6 2/3 innings, giving up seven hits, five runs (four earned), walking just one while striking out eight.

The Tigers got one of the runs back in the seventh. Davidson led off the inning with a long homer to left field, his ninth of the season. Pinder singled with one out, but Beer lined to left and Williams popped up to right to end the threat with the Cards holding a 5-4 lead.

Clemson’s bullpen gave up another run in the eighth – this one on a disputed balk call with a runner at third – and the Cardinals led 6-4.

The Tigers had a final chance in the ninth. Pinder walked with two out, and Beer singled to left field to bring the winning run to the plate. Williams lined out, however, and Louisville left town with the sweep.

The defending national champions – Coastal Carolina - make an appearance in Clemson Tuesday night for Clemson’s last regular season home game. First pitch is set for 6:30 p.m. Clemson travels to Raleigh next weekend to take on N.C. State for the final ACC series of the season.