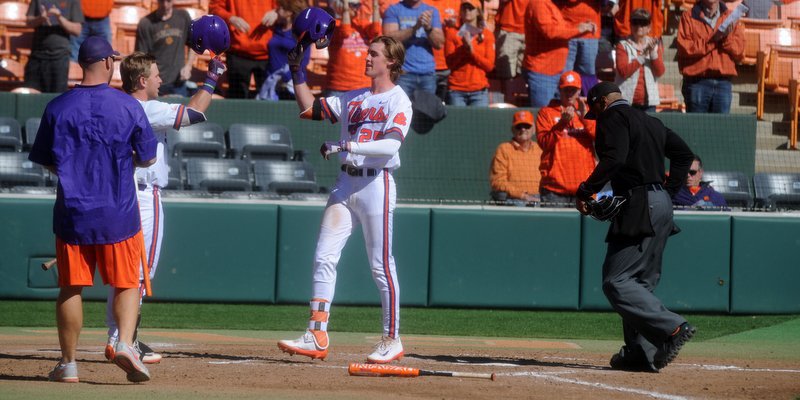 Jolly scores the second run of the game

CLEMSON – Clemson’s pitching staff continued its dominance, and Patrick Cromwell’s solo homer broke a scoreless tie in the fifth as No. 12 Clemson (5-2) swept Elon (3-4) with a 3-0 victory Sunday afternoon under sunny and breezy conditions at Doug Kingsmore Stadium.

Starter Alex Eubanks rebounded from a rough start on opening weekend. Eubanks pitched seven strong innings (faced one batter in the eighth), giving up three hits, walking one and striking out seven in improving to 1-1. Jacob Hennessy pitched the final two innings to pick up his first save of the season.

Clemson pitching gave up just five runs (all earned) in 31 innings on the weekend, posting two shutouts in the process. Clemson pitchers struck out 42 and walked just three in the three games. Robert Jolly was 2-for-4 and scored a run as the Tigers managed just six hits.

"What a great game again by our guys. It was very pitching and defensive today," head coach Monte Lee said. "Alex Eubanks threw the ball very, very well, and then Jacob Hennessy was really, really good. He came in in the eighth inning and struck out three guys, which was very impressive in a tight ballgame. Offensively, I thought we did a pretty solid job today. We actually had some good at-bats. We hit some balls hard that got caught. Seth had some tough luck - lined out to center field, hit a deep ball to right center and the wind was blowing in today. A lot of days, that ball is out of the ballpark. That could've been a big blow. The bottom of the order did a really nice job for us today." 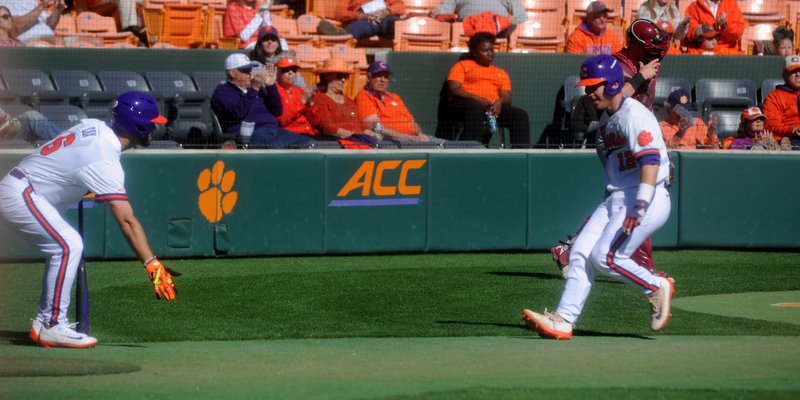 Jolly scores the second run of the game"

The teams were scoreless through four innings, but the Tigers broke through in the bottom of the fifth. Newcomer Patrick Cromwell lofted a 1-0 pitch into the Cajun Café for Clemson’s first run and the first home run of his Clemson career.

The Tigers then chased Brnovich. Jolly continued his torrid start with a single to right, and Chase Pinder walked to put runners at first and second. Reed Rohlman struck out looking, and Jordan Barrett replaced Brnovich.

That brought up Beer, who launched a 1-0 pitch from Barrett into deep right-center. The ball was caught short of the wall, and Jolly advanced to third. Two pitches later, Jolly scored on a wild pitch, and Clemson held a 2-0 lead after five.

The Tigers added an insurance run in the sixth. Logan Davidson led off with a walk and advanced to third on Grayson Byrd’s double. Cromwell and Jolly each struck out swinging, but Davidson scored on a wild pitch for a 3-0 lead.

Clemson returns to action Tuesday afternoon, hosting Wofford at 4 p.m. The Tigers start a three-game series against arch-rival South Carolina next Friday. The Gamecocks play at Clemson at 6:30 p.m., the teams play at Greenville’s Fluor Field at 1 p.m. Saturday and finish the series with a 1:30 p.m. start at Founders Park in Columbia Sunday afternoon.

Lee said the Tigers have to focus on Wofford and not South Carolina.

"Wofford is the next game on the schedule and that's the only one that matters," Lee said. "We would be foolish to overlook that. I'm not overlooking it. We'll deal with the weekend opponent when we get to the weekend opponent. Wofford is the next team we've got to play and we need to play good baseball. Every game on the schedule counts and they all matter. I'll make sure the message is sent loud and clear and I don't think it will be hard our guys ready to play on Tuesday night. Our guys understand the importance of every single game and we'll be ready to play."