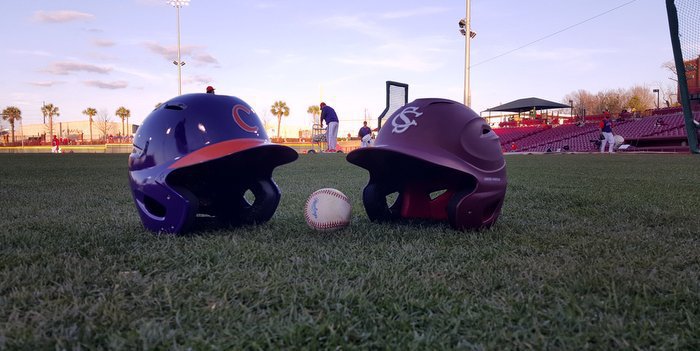 Game two of the series is Saturday at 2:30 p.m. in Greenville

The Gamecocks took advantage of three Clemson errors in the bottom of the fifth, scoring five runs, and the Tigers failed to take advantage of early baserunners as No. 13 South Carolina (10-0) defeated Clemson 8-1 at Founder’s Field.

South Carolina takes a 1-0 lead in the best-of-three series. Game two is Saturday at 2:30 at Greenville’s Fluor Field and game three will be Sunday at 1 p.m. at Clemson’s Doug Kingsmore Stadium.

"It was a tough game," Clemson head coach Monte Lee said. "I thought through four innings we were playing pretty good baseball outside we left too many guys on base. We had the leadoff guy on base in the first three innings and just couldn't come up with that big hit."

Gamecock starter Clarke Schmidt was outstanding – he set career-highs in innings pitched and strikeouts, going eight innings and striking out nine while walking none. He gave up five hits and hit three batters.

Eli White and Seth Beer each had two hits for the Tigers, and it was Beer's third home run of the season that provided Clemson's lone run. Beer cranked a one-out solo shot deep to right field in the top of the ninth to break up the shutout. It was his 10th RBI of the season.

The first two batters reached for Clemson in the first, but the next three batters struck out against starter Clarke Schmidt to end the threat. Barnes got the first two batters in the bottom of the inning, but John Jones lined a double to left-center and he scored on a single to right by Alex Destino for a 1-0 South Carolina lead.

Barnes settled in at that point while Schmidt danced in and out of trouble. The Tigers got the leadoff runner on base in each of the first three innings but failed to plate a run, and wasted scoring chances in the fourth and fifth as Schmidt began to settle into a groove.

The Gamecocks finally got to Barnes in the fifth, but Clemson’s defense was a main culprit. Gene Cone flied out to left to start the inning, but Marcus Mooney singled off of Barnes’ glove to get things started. Danny Blair appeared to ground out, but his bat tapped the glove of catcher Chris Okey and he was awarded first base on catcher’s interference.

Dom Thompson-Williams hit a grounder to first baseman Chris Williams, who elected to go to second for the force out. Instead of second, his throw sailed into left field and the run scored for a 2-0 lead. Jonah Bride singled to center for a 3-0 lead, and the throw to the plate advanced both runners. Jones was hit by a pitch to load the bases, and Destino lined a single to center to score the fourth run. The throw came to third and Bride fell down, but third baseman Adam Renwick didn’t see Bride in time to get the out at the plate and South Carolina led 5-0.

"We got to find a way to minimize damage," Lee said. "Big inning baseball will get you beat. We got to minimize our damage when we make an error, walk a guy, or we give up a run. We got to stay relaxed and we just got to keep competing. We can't let the frustration of being down by a couple of runs affect us."

L.T. Tolbert laced a single to center for the final run of the inning, and South Carolina had all the runs they would need with the 6-0 lead.

Barnes was able to finish the inning, and his night ended with five innings pitched. He gave up seven hits, six runs (three were earned) and struck out four while walking none in 96 pitches.

The Gamecocks added two runs against two Clemson relievers in the eighth.

Clemson will be the home team Saturday at Fluor Field and will occupy the first base dugout.