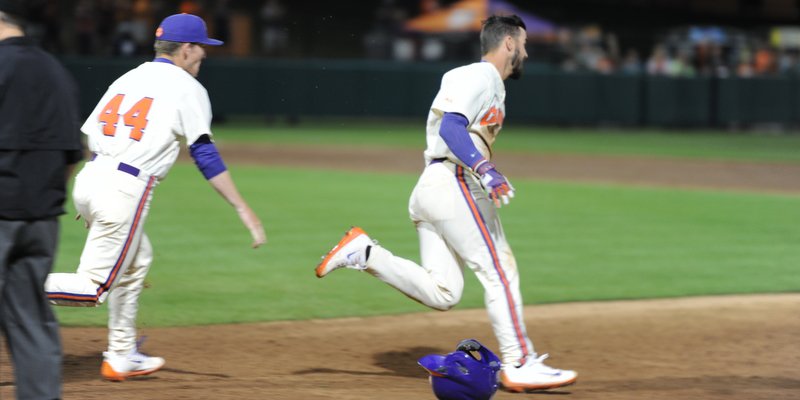 CLEMSON – Andrew Cox laced a game-winning single to right with the bases loaded in the bottom of the 11th, giving No. 4 Clemson a 6-5 walk-off win over Charleston Southern Tuesday night at Doug Kingsmore Stadium.

The Tigers trailed 5-4 heading to the bottom of the ninth but tied the score to send the game into extra innings. Reed Rohlman led off the bottom of the 11th with a hard single to center, and after Seth Beer popped out to center, Chris Williams laced a single over the shortstop’s head that moved Rohlman to third. Logan Davidson walked on four pitches to load the bases, setting up the heroics.

Cox worked losing pitcher Will Hartsell to a 3-1 count and laced the next pitch down the right field line for the game-winner.

Clemson improves to 29-5 with the win, while Charleston Southern falls to 16-15. Clemson was in danger of losing its first midweek game since May of last year but now heads to Florida St. having won six straight. Jeremy Beasley pitched a third of an inning and earned the win.

"Proud of our club for competing as hard as we did. Being down 5-1 after four innings, we got ourselves back in the ballgame in the sixth," head coach Monte Lee said. "Logan Davidson with a three-run homer to make it 5-4 and then in the ninth inning with one out and two strikes Chris Williams sac fly after a Rohlman single that put the tying run on. Seth Beer had some tough luck and hit some balls hard, hit a line drive to right field to move him over. Chris with the sac fly to tie it.

"Our bullpen threw 7 2/3 scoreless innings, which is unbelievable. The bullpen did an amazing job. There in the 11th inning, Rohlman with the two-strike single, Chris Williams executed a hit and run to get him to third base and then Rudy Cox, the leader of our ball club and fifth-year senior, with the walk-off single to come from behind and win the game."

Davidson worked a one-out walk, stole second and came home on a single to left center by Andrew Cox to put the Tigers on the board with a 1-0 lead in the second.

Charleston Southern answered in the third as Nate Blanchard hit a homer over the Rusty Adkins sign in right center to tie the game at 1-1 in the third inning.

Jackson exited the game with Clemson trailing Charleston Southern 5-1, after pitching just 3 1/3 innings and giving up five runs – all earned – on seven hits.

Jacob Hennessy gave up a run-scoring groundout that made it 5-1, and the next Buc hitter singled to left, but Beer threw out the runner at the plate to preserve the four-run deficit.

Rohlman singled to lead off the sixth, and after Beer lined out to right, Chris Williams singled to left. That brought up the hot Davidson, who quickly deposited a 0-1 pitch over the wall in left for his sixth home run of the season, the second from the right side of the plate. After six, the Tigers trailed by just one run at 5-4.

Clemson had a chance to tie in the seventh after Pinder singled and Rohlman was hit by a pitch with two out. However, Beer struck out on a 2-2 pitch to end the threat.

The Tigers wasted another golden opportunity in the eighth. A walk, a fielder’s choice and an infield single loaded the bases with nobody out, but pinch-hitter Robert Jolly, Jordan Greene and Patrick Cromwell all struck out and the Tigers still trailed by one entering the bottom of the ninth.

Pinder led off the ninth with a walk, and Rohlman was hit by a pitch on an 0-2 count. That brought up Beer, who lined to deep right with Pinder advancing to third. Williams quickly fell into an 0-2 hole, but recovered and hit a sacrifice fly to right that scored Pinder with the tying run.

The Tigers had a chance to win it in the 10th. Greene doubled with two outs, and Cromwell struck out, but the catcher dropped the ball and Cromwell reached first while Greene moved to third. Pinder hit a scorcher to right that was caught for the third out.

Lee said he was proud of his team's effort.

"As a coach, I don’t know if you can be more proud of a team. I don’t know what else I can than that. What else can I ask for? We just seem to find a way," Lee said. "We’re down by four runs and in the back half of the game we just find a way to get it done. Guys keep stepping up on the mound. We had our chances earlier in the eighth with bases loaded and nobody out and couldn’t get it done. That may be a good thing for us to fail in that situation and learn from that so that when we’re in that situation again, we’ll have a little bit of a better plan. Overall, extremely competitive back half of the game from our bullpen and we found a way to get it done against a Charleston Southern team that I thought really competed tonight and played a very good baseball game. We were very fortunate to win."

Clemson travels to Florida St. for a three-game series that starts Saturday.

Clemson vs. Charleston Southern box
ONE DAY ONLY! Fanatics.com Black Friday Sale 20% off on orders over $75
Comment on this story