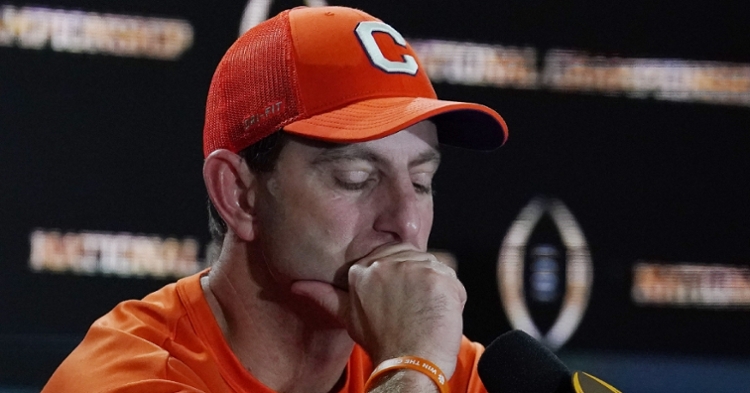 Many of the storylines heading into the offseason centered on an Alabama team that failed to win the SEC Championship and failed to make an appearance in the College Football Playoff for the first in the playoff’s history. Losses to LSU and Auburn sealed the fate of the Crimson Tide, who also failed to win the SEC West.

Many pundits have pointed to the fact that Alabama head Nick Saban and the Crimson Tide will be riding an angry streak into the 2020 season, giving fair warning to the rest of college football that the talented Tide will be hard to handle.

Clemson lost to LSU in the title game and Swinney was asked Friday if the Tigers were angry after the loss to the Bayou Bengals? His quick answer? No. He was angrier after Alabama beat Clemson 45-40 in the title game in the Phoenix in January of 2016.

“I was angry after that 2015 game. I was angry that year. I was disappointed,” Swinney said.

Clemson failed to cover Alabama tight end OJ Howard in that game and the Tide recovered an onside kick that helped propel them to the victory. The next spring, Swinney lamented the five plays that beat the Tigers and used that game as the springboard to next year’s 35-31 win over the Tide and the school’s first National Championship since 1981.

In the title game this year, Clemson missed out on some plays and there were things that could have been done better, but Swinney feels that LSU was simply the better team that night and won’t use anger as motivation this season.

“For us, it is just excitement about being able to go compete again and see what this team can do,” he said. “That is all I am motivated by.”

For Swinney, it’s all about the winning.

“To me, as I always say, I am more motivated by winning than by losing. I am not one of those guys that needs to lose to get motivated. I am motivated by winning. I am disappointed that we got beat that last game,” Swinney said. “I really wasn’t angry. I thought our guys were very well prepared and really laid it on the line for our team,” he continued. “Yeah, we wish we could have done a few things better, but they were the better team and they earned it. You tip your hat and you move on.”

Spring practice was halted after just nine practices, the spring game was canceled and it’s unknown when the Tigers will be able to return to the practice field, but Swinney isn’t worried and once again said he isn’t angry.

“I’m not sitting around worried about that, we had an unbelievable run, [won] twenty-nine games in a row. We have been in four of the last five national championship games. We have had a lot of success, but, along the way, we have had some challenges, too. It is just a part of where you are.”