"Played a very, very complete baseball game tonight. 7-1 game, it was a pitchers' duel for a good portion of the game, for five innings," head coach Monte Lee said. "I thought that Bargfeldt and Brooks went toe to toe and executed pitches. Both defenses were making plays behind them. You know, we just found a way to do the little things early, and then in the sixth inning, as I've said time and time again, that momentum, once that momentum starts and our offense is so contagious, it's very, very difficult to stop it.

"But in the second inning, Wharton got it started for us with a two-strike base hit the other way, did a good job of staying on an off-speed pitch, Hawkins drew a walk, Sam Hall got a bunt down, and Jordan Green did a great job of hitting the first strike he got, 6-3, RBI. Good situational hitting on our part in the second inning."

Clemson struck first in the second inning. Drew Wharton led off with a single through the right side, took second on a Justin Hawkins walk and advanced to third on a sac bunt by Sam Hall. Jordan Greene grounded out to shortstop to plate Clemson’s first run of the game and give the Tigers a 1-0.

Miami tied the game on a controversial fair ball down the first baseline. Michael Burns hit a two-out single past a diving Patrick Cromwell and came around to score when Dylan Cloonan hit a high bouncer over the head of Chris Williams and into no man’s land making it a 1-1 game through four innings. 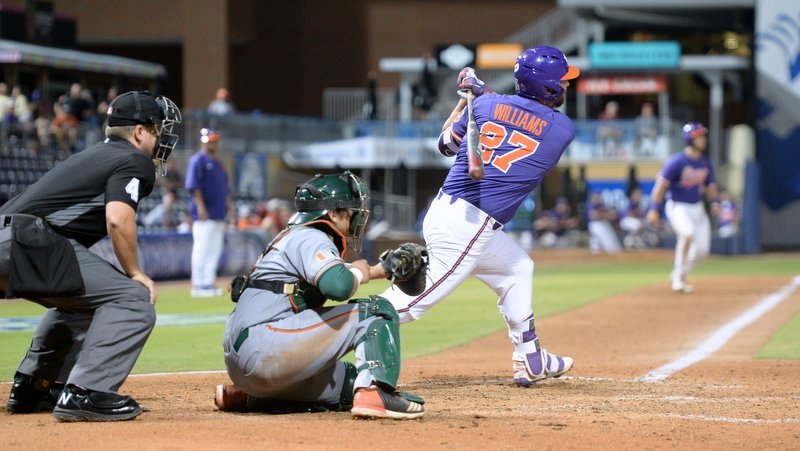 Wharton led off the sixth inning with a bomb over the left field wall, narrowly missing the bull. It was the senior outfielder’s seventh home run of the season.

"Yeah, I was definitely looking for something early," Wharton said. "He started me off with a changeup away, and Chris in the previous inning told me that he was starting to work him in, so I just -- I looked at what Chris was going through in his at-bat, and he threw me a changeup away, and he came with a lot of fastballs in, so I was looking for a fastball middle in, and I got the pitch and put a good swing on it, so that felt really good."

Back-to-back two-out singles by Greene and Logan Davidson chased Miami starter Jeb Bargfeldt. Kyle Wilkie promptly served a 1-1 pitch into left field to score Greene from second. Seth Beer greeted the second Miami relief pitcher of the night with a single through the right side to plate Clemson’s third run of the inning. Williams followed with a three-run homer to right field – his 16th of the season – giving Clemson a 7-1 lead after six innings.

Clemson will play the winner of the Florida State and NC State game Saturday at 5 p.m.