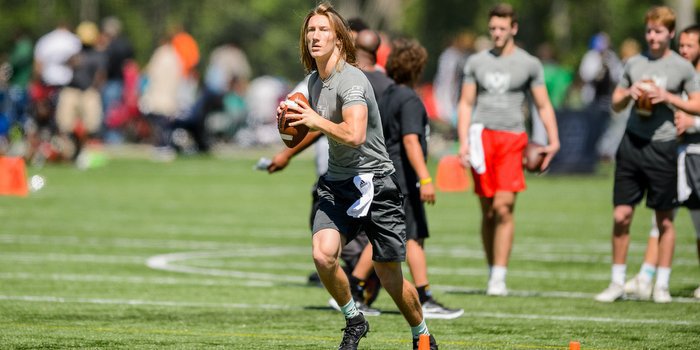 Trevor Lawrence will be on center stage in Oregon this week

Clemson’s appearance in two consecutive College Football Playoff title games, a National Championship and new facilities that are second-to-none in the nation have the Tigers’ recruiting at perhaps the highest level in program history. This week’s The Opening bears that out in dramatic fashion.

Nike Football The Opening Finals will bring together 166 of the nation’s top high school football prospects for a six-day competition, taking place at Nike’s World Headquarters in Beaverton, Ore., from June 28-July 3rd.

Known as one of the premier events in high school football, Nike Football The Opening Finals attracts the best of the best and is designed to help athletes improve their knowledge of the sport, learn position-specific training techniques, and ultimately crown a winner for the Nike 7ON7 tournament (7v7) and the Nike Final 5 Linemen Competition.

This year, there are 22 prospects that TigerNet is tracking that are either committed to Clemson or still on the Tigers board of prospects. In year’s past, that number has fluctuated from a couple to maybe as many as six or seven, but the 22 shows the power of the paw in recruiting circles.

Over the past five months, a series of Nike Football The Opening Regionals has evaluated more than 4,200 athletes on a 13-city tour, showcasing talent from student-athletes throughout the country. NFL Network will broadcast the Final 5 Lineman Competition and 7v7 championship game on July 3.

For the fifth consecutive year, Nike will also host the Elite 11 Quarterback Competition - featuring the top 11 high school signal callers vying for the final MVP of this year’s Elite 11 class. The Elite 11 will commence on June 28 and run through July 3, with the final MVP announced that evening. A six-part series on the Elite 11 journey will air on NFL Network in early September.

Headlining that group is Clemson commit Trevor Lawrence, who figures to be the odds-on favorite to win the competition.

Prospects to watch over the next week