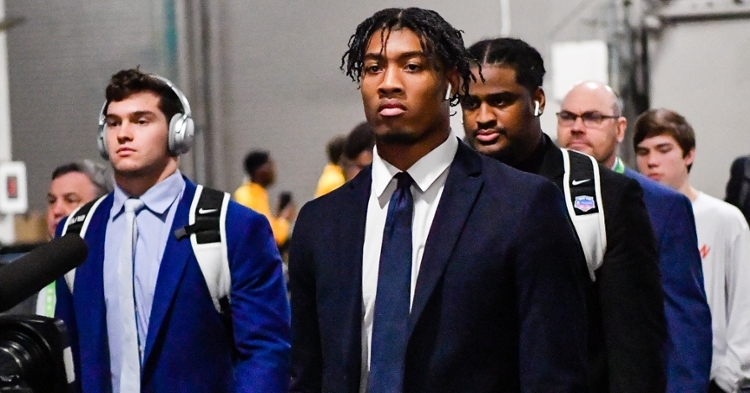 Simmons would love to intercept or sack Tom Brady.

Former Clemson linebacker Isaiah Simmons has an entirely new roster of teammates to get to know, but there is one Tiger he would love to take with him.

Simmons was picked by the Arizona Cardinals with the No. 8 overall pick in the first round of Thursday’s NFL draft, and he recently took some time with DraftWire to talk about his career. Simmons did spend time talking about the future but also looked back at his Clemson teammates.

When he was asked about which teammate he would take with him to the NFL, he didn’t hesitate in answering. “

“I would probably bring James Skalski with me. He was our MIKE linebacker,” Simmons said. “That’s a tough, hard-nosed guy right there. Believe it or not, I’ve heard one of our coaches call him a ‘War Daddy’ before (laughs). What are the chances that you ask me that question and we had a nickname like that for a guy? I would definitely bring him with me. I spent a lot of time with him. We get along great. He’s definitely the guy I would bring with me.”

He was then asked about quarterback Trevor Lawrence and was effusive in his praise.

“The first thing I would like to say about Trevor is that as great as he is a player on the field, he’s an even better person,” Simmons said. “That’s something that I really admire about Trevor. He’s the most selfless person you’ll ever meet. If he wasn’t 6-foot-6 with long hair, you wouldn’t even know he was Trevor Lawrence. He’s a great friend of mine.

"He’s one of the best players I’ve ever been on the field with. The stuff that he does in games is amazing, but I wish you could see some of the things he did in practice. It was completely unbelievable. He never failed to impress me.

Because he’s already played against elite talent, Simmons isn’t afraid of the elite competition in the NFL.

“I’ve played against so many amazing players throughout my time at Clemson. We’ve always been in the playoffs so of course those teams are always stacked with great talent,” he said. “I’ve played against a long, long list of really great players. Guys like Lamar Jackson, obviously Tua Tagovailoa, Joe Burrow and Jalen Hurts. If I start getting into the receivers and running backs, the list will go on and on. Playing for Clemson in the postseason, you’re bound to run into some elite talent.”

Which NFL quarterback would he love to intercept? That’s a no-brainer.