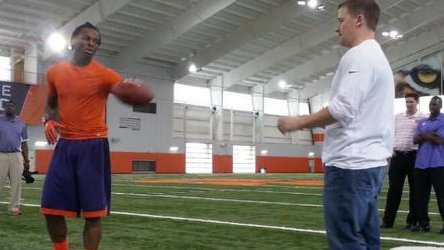 Rod Hall worked out in front of several NFL scouts

Rod Hall
Sr. Guard
#12 6-1, 205
Augusta, GA
View Full Profile is excited about the newest chapter in his life: a return to the gridiron with Northern Iowa’s football team.

Hall made the decision this week to put his basketball career on hold and see what football has to offer, and as a result will play wide receiver this season for the Northern Iowa Panthers of the FCS Missouri Valley Conference.

Hall told TigerNet Thursday that it doesn’t mean basketball is over – he just wants to see what football has to offer.

“It was really just me wanting to take advantage of the opportunity that I have,” Hall said. “If I want to get back to basketball after this year, I will still be able to do it.”

Hall started over 100 games as Clemson’s point guard over the last four seasons, compiling 926 points, 393 assists and 86 steals. He started 97 of 98 games through the final three seasons. However, he also played on the football team at Augusta (GA) Laney High School, and Clemson assistant basketball coach Steve Smith

That led to a late April Pro Day for Hall inside Clemson’s indoor practice facility, where he worked out in front of six NFL teams as the New Orleans Saints, Kansas City Chiefs, Cleveland Browns, Carolina Panthers, Baltimore Ravens and Buffalo Bills showed up to watch Hall work out. Hall, who had more than 1,200 receiving yards and 13 touchdowns during his senior season at Augusta (GA) Laney High, worked out at both defensive back and wide receiver despite having little preparation time.

Hall ran a 4.55 40-yard dash during the workout, which was faster than 23 of the 46 defensive backs at the NFL Combine in February. Hall didn’t get drafted, however, and without any free agent nibbles decided to use his remaining college eligibility in an effort to get a further look.

That led to a conversation with Northern Iowa, where one of the school’s top recruiters is Brandon Lynch who like Hall is an Augusta native.

“I talked to them a couple of weeks ago, and one of their coaches is from Augusta and he is pretty familiar with me and I know him,” Hall said. “We talked and it went from there. I am excited to get back out there and see what I can do again. I just want to make sure I take advantage of this opportunity.”

Hall said playing receiver shouldn’t pose much of a problem.

“I am comfortable at receiver,” he said. “I am just going to do the same things I did in high school and play the same way I have been playing my whole life.”

Northern Iowa finished 9-5 last season and received an at-large bid to the FCS Playoffs where they defeated Stephen F. Austin in the first round before losing in the second round to Illinois State. The school is the alma mater of former NFL quarterback Kurt Warner.