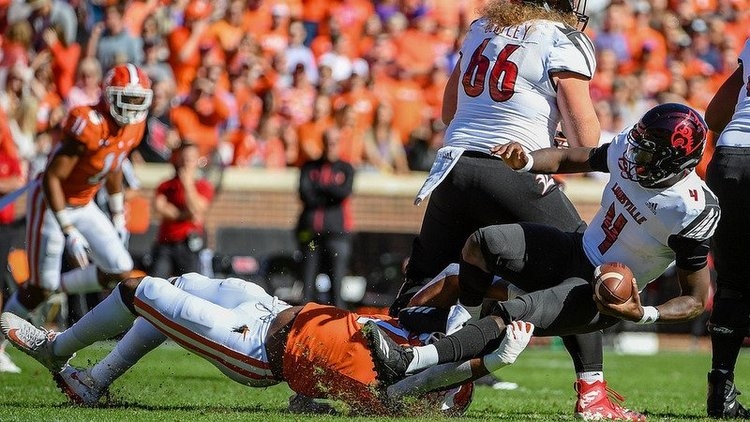 Bryant was injured on this play against Louisville

Austin Bryant knew he had to make a choice. Forego the rest of his senior season to prepare for the NFL and a better payday, or work through the pain and help his brothers win a National Championship.

He chose his brothers over the money.

Bryant, the talented defensive end out of Georgia, was named the Defensive MVP of the Cotton Bowl after recording three tackles for loss and two sacks, and he did that after suffering a torn pectoral muscle during a game against Louisville on Nov. 3.

“I think it was either the first or second series, I reached out to sack the quarterback, and when he hit my arm, something popped. I came out of the game and thought it was just a stinger,” Bryant told TigerNet Monday. “They checked it out, moved it around to see if it was good and I went back in the game the next series and couldn't really use it. I just tried to tough it out.

“Luckily, we only ended up playing one half that day, so I didn't really think much of it after that, and then the next day, I got an MRI, and it showed it was torn, so I had a decision to make that week whether I was going to have surgery or whether I was going to stick it out and play the rest of the year. I decided to go ahead and try to play through it.”

Bryant said the Clemson doctors and coaches made sure he knew that he had more than one option, including going ahead and having the surgery.

“They told me what my options were, I thought about it, and I talked a lot of people for advice. I talked to my family and got their opinion,” Bryant said. “Ultimately, it was up to me whether I wanted to have surgery right then or play with it. I decided to strap it up that week and see how I felt going forward and see if the adrenaline rush would get me over during the game. I think we played Boston College that next week and it hurt a lot, I'm not going to lie. I was able to make it through the game, and as the season moved forward, I felt it less and less because it scarred up and stuff.”

Practicing with the injury was difficult.

“The first two or three weeks, I wasn't able to practice much at all,” Bryant said. “Monday, which is basically a walk-through practice, I was fine but as far as Tuesday, Wednesday, my reps were really limited. I don't think a competition (1s-on-1s) until like the final two games of the season. It definitely limited me as far as how much I could practice throughout the week.”

Clemson defeated Alabama on Jan. 7th to win the national title and Bryant had surgery ten days later. It was performed by Dr. Patrick Connor, the head physician for the NFL’s Carolina Panthers.

“The surgery was the 17th of January, so I'm about a month and a half out,” he said. “I'm right on schedule, if not a little ahead of schedule as far as my rehab. I'm looking at 4-6 months before I can fully do everything as far as lifting weights, running and hitting.”

Bryant won’t work out at this week’s NFL Scouting Combine in Indianapolis, and he says he knew in November that making the decision to play would affect his status for the Combine, and perhaps the NFL Draft.

“That's basically the decision I had to make because had I gotten the surgery then, I probably would've been able to participate at the Combine as well as Pro Day, but I felt like finishing what I came back to do would be more important,” he said. “Football isn't going anywhere. Of course, you want to get drafted as high as you can and participate in the Combine because that's something you see growing up, but at the end of the day doing what I came back to school to do - win a national championship - was what was most important to me and I had an opportunity to do that. I wasn't going to let that stop me. If I could walk, I was going to play.”

He then said he has no regrets.

His teammates and coaches appreciated his decision.

“They supported me the whole time I was having to make this decision. They told me they wouldn't change either way - if I needed surgery then or later, they were going to love me and support me whatever decision I made,” Bryant said. “My teammates told me to do what's best for me. I prayed about it, and I talked to some people and at the end of the day, I felt like what was best for me was being there for my team, and that's what led me to continue to play, and that's what gave me the drive and the will to play for the rest of the season.”

Bryant said he thinks the decision to play will be a plus when NFL teams take a look at his character and desire to play the game he loves.

“Not a lot of them knew I had played with a torn pec. They had still me graded late first or early second. Some teams said third round,” he said. “Now that they know I played about half the games with a torn pec, I don't think it will hurt me. I won't be able to do any of the drills that they want to see me run, but if you see a guy play like that when he already has an opportunity to play at the next level, but he continues to play for his team, I think that says a lot about the person that I am and what I value most important me.”

He said he isn’t worried about where he lands in the draft; he just wants the chance to prove he can help an NFL team.

“That's all I need is an opportunity,” Bryant said. “Everybody wants to be the first one drafted but just to have the opportunity to play at the next level and fulfill a lifelong dream, all I need is a foot in the door, and I can do the rest.”