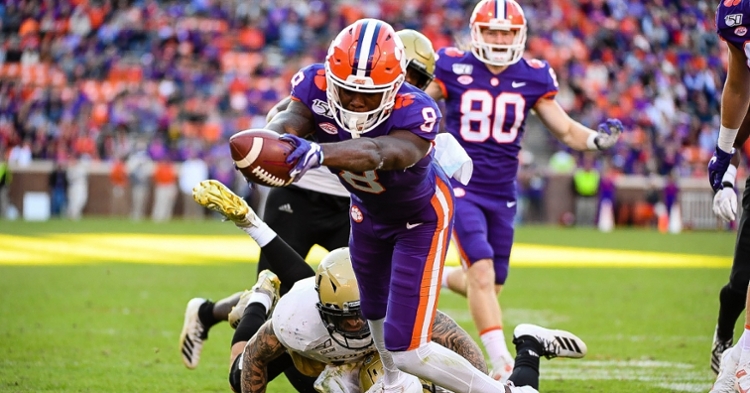 Clemson has the nation's best running back in Travis Etienne.

College football statistics do not always tell the entire story, but a little insight gives you a pretty good idea of why some teams are more successful than others.

For instance, the old adage says that if you can run the football -- you should be pretty good. But Georgia Tech under Paul Johnson never really recaptured its early magic and despite being near the top of the charts in rushing offense and time of possession each year, the Yellow Jackets were just a very average program. Why? Because they couldn’t and didn’t throw the football for the much-needed balance, and were just okay defensively.

However, Clemson and Alabama are either at the top or near the top in total defense and scoring defense and both of those programs are wildly successful while also featuring really good offenses.

Clemson scored 659 points in 2019, concluding the season only five points shy of tying the school record of 664 set in 2018. Clemson is now responsible for two of the 22 650-point seasons in major college football history and two of only 16 since Division I split in 1978.

Clemson is the first school with back-to-back 650-point seasons since Yale in 1888-89, predating the start of official NCAA recordkeeping in 1937 and the second year of which was coincidentally the year Clemson was founded.

Clemson has featured remarkable offensive balance while qualifying for the College Football Playoff National Championship Game in each of the last two years. Clemson has averaged at least 200 rushing yards and 200 passing yards per game four times in school history, with two of those seasons occurring in the 2018 and 2019 campaigns.

Clemson exceeded the 200/200 mark rushing and passing in 2019 by averaging 240.4 rushing yards per game and 288.3 passing yards per game. Clemson was one of only three teams in 2019 to average at least 240 yards per game in each category, along with fellow CFP participants Ohio State and Oklahoma.

Clemson has exceeded both 200 passing yards and 200 rushing yards in 51 games under Dabo Swinney, posting a perfect record in those contests. Clemson’s 17 such games since the start of the 2018 season are the most in the country.

Clemson became only the third school since 2000 to average 7.35 or better yards per play in back-to-back seasons, joining Alabama, which did it across 2018-19, and Oklahoma, which is in the midst of a four-year streak across the 2016-19 seasons.