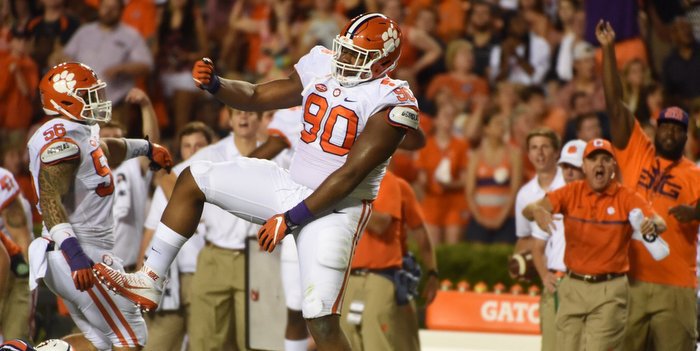 Dexter Lawrence is fourth on the team in tackles

CLEMSON – The Clemson football team will hold a light practice today, then take the next three days off as part of the Tigers’ open date. It isn’t exactly the midway point of the season – they’ve played seven games and have five more in the regular season – but if this team hits the goal of playing in the College Football Playoff and maybe even the title game, seven is about as close to the middle as you can get.

The season began with high expectations, and even though the team has struggled to find its way at times, all of the team goals are still on the table. Along the way, there have been some jubilant highs, moments where we’ve questioned what we’ve seen and there have been a few low points.

With that in mind, let’s take a look at some of the players and moments that have told the story of the season’s first seven games.

OFFENSIVE PLAYER OF THE YEAR

It really is too bad that there really aren’t published stats for offensive linemen, because I would be tempted to throw Jay Guillermo’s name in here. However, the obvious choice is quarterback Deshaun Watson.

Watson has completed 63.6 percent of his passes (164-258) for 1,950 yards and 20 touchdowns. He’s also thrown eight interceptions. On the rushing side of things, he has 71 carries for 279 yards and a score. However, Watson’s value isn’t measured in stats – he led the team down the field in crunch time at Auburn, led scoring drives against Louisville when it mattered and played well last week in the win over N.C. State.

So, who do you pick?

For me, it has to be Wilkins, who is playing out of position and still making an impact on the game. He’s also blocked a kick and is now one of the unquestioned leaders of the entire team.

PLAY OF THE YEAR

Go ahead. Take your pick of the two Marcus Edmond plays. I’ll take the first one against Louisville.

Going into the game against Louisville, Edmond had recorded just two tackles for his career. Against Louisville’s top-ranked offense, Edmond was credited with 11 total tackles. However, he made Clemson’s final defensive play of the night to seal a 42-36 victory.

With 40 seconds left on the clock, Louisville needed to convert a 4th-and-12 to keep the game alive. James Quick caught a short pass from Lamar Jackson and had room to run for the first down. But Edmond, who began the play covering Jamari Staples, immediately reacted to the completion to Quick.

The Clemson cornerback exploded toward Quick and knocked the wide receiver out of bounds one yard short of the first down. The play saved Clemson’s victory, and possibly its season.

This season would be a lot different if the Tigers had not dropped the ball. A lot. Literally. Costly drops and turnovers – especially in the red zone – have snuffed out several Clemson drives. There were five critical turnovers against Louisville and four last week against NC State.

One could argue that the toughest part of the schedule is in the rear view mirror – at Auburn, at Georgia Tech and at home against the Cards – but Clemson travels to Tallahassee next week and has a home game against a solid Pitt team in early November. The turnovers have to go away if the Tigers want to make it a 15-game season.

As for the drops, receivers had dropped 23 passes through the season’s first six weeks. The leading culprits are Deon Cain (five) and Mike Williams (4). Charone Peake led the team with just five drops last season, and Clemson dropped 23 in 15 games. That’s another trend that has to reverse.

The defense. Brent Venables’ group entered the season as the question mark, and through seven games it’s been the play of the defense that has helped the Tigers to a 7-0 record. There were questions at defensive end, linebacker and in the secondary, but Venables has done a masterful job of making sure this unit doesn’t miss a beat despite the losses each season.

I guess we shouldn’t be surprised, because it’s the same situation each year, but this has been one of his best coaching jobs.

ROOKIE OF THE YEAR

The 6-6, 346-pound rookie has earned a spot in the starting lineup with his stellar play. He’s actually fourth on the team with 33 tackles, an amazing stat for any defensive tackle, much less a freshman.

The good news, he is only going to get better. According to Pro Football Focus, Lawrence was almost unblockable against NC State, and as he matures and gets better with his technique, he’ll be more of a force than he is now.