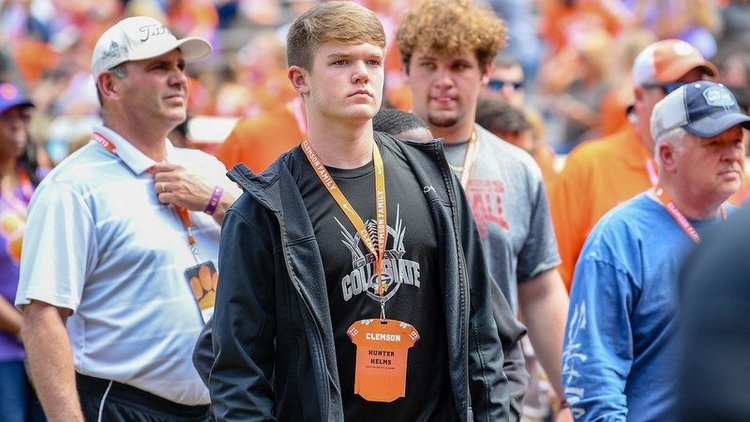 Hunter Helms knows that receiving a Clemson offer is a longshot, but he’s kept the lines of communication open with the coaches. Just in case.

Helms is a 2020 quarterback prospect out of West Columbia (SC) Gray Collegiate who has put up some gaudy numbers recently. Last season, Helms completed nearly 69 percent of his passes for 2,966 yards and 24 touchdowns against just six interceptions.

In his career, Helms has accounted for 5,218 yards and 42 touchdowns with only 13 interceptions. The 3-star has just three offers but stays in constant communication with the coaches at several different schools.

That includes an invitation to attend Clemson’s spring game.

“It was great. I love going to Clemson on a visit, and every time I go, it’s just great,” Helms told TigerNet. “It was a great day to be up in Clemson and just talking to the coaches and being around the players. It's just doesn't get much better than that. You can't complain when you go up to Tiger Town.”

Clemson has extended just two offers to quarterbacks in the 2020 recruiting cycle – Chandler Morris and DJ Uiagalelei. Morris is expected to sign with his dad at Arkansas and many expect Uiagalelei to choose Clemson. However, Helms is staying in touch, just in case.

“They have that one guy, and I don’t blame them,” Helms said, “But I let them know that anywhere I go, I’m not really afraid of competition and they know that. We just stay in touch and we know where we both are and it’s just great to go up there and just to stay in touch with all the coaches. So that's why we always kind of stay in contact.

“Earlier in the process when I was a sophomore it a little bit more serious than it is now. I know it’s because they have those guys they are kind of aiming on. But like I said, it’s always good just to be up there for the spring game.”

Who leads for his services?

“I wouldn't say I have any leaders at the moment or one particular leader,” Helms said. “I've been going around a lot of places this spring for sure. And if I had to say a top five in no particular order, just like the people that kind of stand out to me and we always stay in tight touch, I'd probably say a Louisiana Tech, Liberty, Yale, West Virginia and Miami. I’d probably say those five are the main ones.”

Helms said that both Coach Jeff Scott and quarterbacks coach Brandon Streeter have invited him for camp this summer and he plans to make it for at least one of those days.