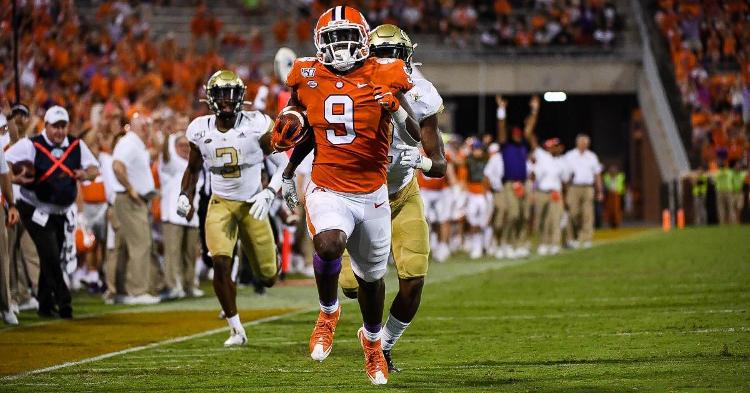 Etienne had 12 carries for 205 yards versus Georgia Tech.

CLEMSON – It’s not how you start; it’s how you finish. That statement fits Travis Etienne’s performance against Georgia Tech and might just fit his burgeoning Heisman Trophy campaign.

Etienne was the star of the Tigers’ season-opening victory over the Yellow Jackets, rushing for a career-high 205 yards on 12 carries. He also added three scores. The junior moved into the top 10 all-time in career rushing yards at Clemson, and a 90-yard scoring burst in the first quarter tied for the longest run in school history.

Etienne didn’t start off hot, however. His first carry lost a yard. His second carry lost another yard. His fifth carry turned into a fumble that was recovered by Tech.

The rest was Etienne at his finest. Take away the first two carries and Etienne gained 207 yards on his final 10 carries, an astounding 20.7 yards per carry average. Five of his carries were for 12 or more yards. His three touchdown runs totaled 152 yards, or just five fewer yards than Georgia Tech gained on the evening.

The Heisman campaign should be in full force, but Etienne isn’t buying the hype. Not after one game.

“It’s the first game of the season,” Etienne said. “Just being mentioned for the award is crazy to me. It’s kind of unbelievable at times.”

Clemson head coach Dabo Swinney thinks Etienne belongs in a group with one other running back – Clemson great C.J. Spiller.

“We’ve had some great players roll through here,” Swinney said. “Spiller and Etienne are kind of in a group by themselves simply because there are not many people who can just take one 90 (yards). Travis is a different-style player (than Spiller). He’s more powerful. He’s bigger. But he’s got that same ‘hold your hat’ (ability).”

Co-offensive coordinator Tony Elliott said he was pleased to see Etienne bounce back from the early fumble.

“Really proud of him bouncing back,” Elliott said. “He’s the guy we’re going to go to in a situation like that, so it’s on to the next play. Don’t let a bad play beat you twice.”

Etienne smiled when he was reminded of the fumble and his subsequent response.

“You always just have to control what you can control,” he said. “You never want to fumble as a running back. You never want to let your team down, so I was just trying to get it back. It (the touchdown) was a great play call by the coaches, and then Diondre Overton gave me a great block on the sideline and then I was off to the races. I ran into Jackson and it worked out because he just ran over the guy.”

On his 90-yard scoring run, Etienne followed big left tackle Jackson Carman to the left on a counter play, waiting for Carman to bury the hapless Georgia Tech safety before hitting the sideline at full speed.

“He settled in and had an unbelievable game,” Swinney said. “He was patient, set his runs up.”

When it comes to the Heisman, Etienne doesn’t worry about splashy performances or making sure he has his yards – he just wants to win games with his teammates.