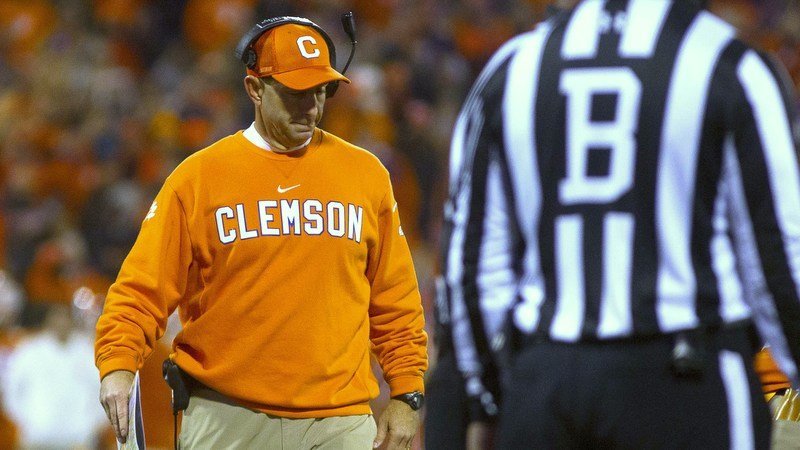 Swinney lowers his head after speaking with an official Saturday night (Photo by Josh Kelly, USAT)

CLEMSON – Almost everyone in attendance at Saturday night’s 56-35 Clemson victory over South Carolina had the same reaction when Clemson defensive end Clelin Ferrell was flagged for “Disconcerting Signals.”

The reaction? What in the heck is that? It was something that Clemson head coach Dabo Swinney called “silly.”

To set the stage – During the third quarter of the Tigers’ fifth consecutive win in the rivalry, the Gamecocks had driven down the field and soon had 1st-and-goal at the Clemson four-yard line. Two runs didn’t gain any yardage, and on third down, a pitch sweep was sniffed out, and the runner was tackled for a two-yard loss.

The Gamecocks didn’t hesitate to go for it on 4th-and-goal from the four, and both teams lined up for the snap. As the Clemson defensive line got set and Ferrell rolled from an interior position out to end. The official threw the flag for “Disconcerting Signals,” and the Tigers were penalized half the distance to the goal to the two. The Gamecocks didn’t convert, but the flag caused a buzz in the stands and in the press box. In all my years of covering college football, it was the first time I had seen it called (I saw it in an NFL game once years ago).

The rulebook states that “No player may call defensive signals that simulate the sound or cadence of (or otherwise interfere with) offensive starting signals ... "

Swinney said it was a silly call to make during crunch time of a game, but also said that Ferrell didn’t need to roll out to end.

“Oh my gosh, we make a lot of calls defensively - move calls and things like that and guys (move) from one gap to another gap,” Swinney said. “That's normal defensive football, but Clelin did a monkey roll - a butt roll. And he doesn't need to do that. And that's what they called. I thought it was a little silly to make that call.”

Swinney said the officials – it was an SEC crew – would have been better served to simply tell the player not to do it again.

“Just go over and tell them - don't be rolling when you move. Just move,” Swinney said. “Nobody has ever told us that's a rule. He moved. He just did a seat-roll. First time we've ever had that called. Great opportunity for Clelin to learn. Don't - we call it monkey rolls. Don't monkey roll. Don't do it. Just move! I (asked), 'What are y'all calling? We stemmed.' He said, 'Well, your defensive end rolled outside.' 'Oh OK, we'll buy that one.' Can't do that.”